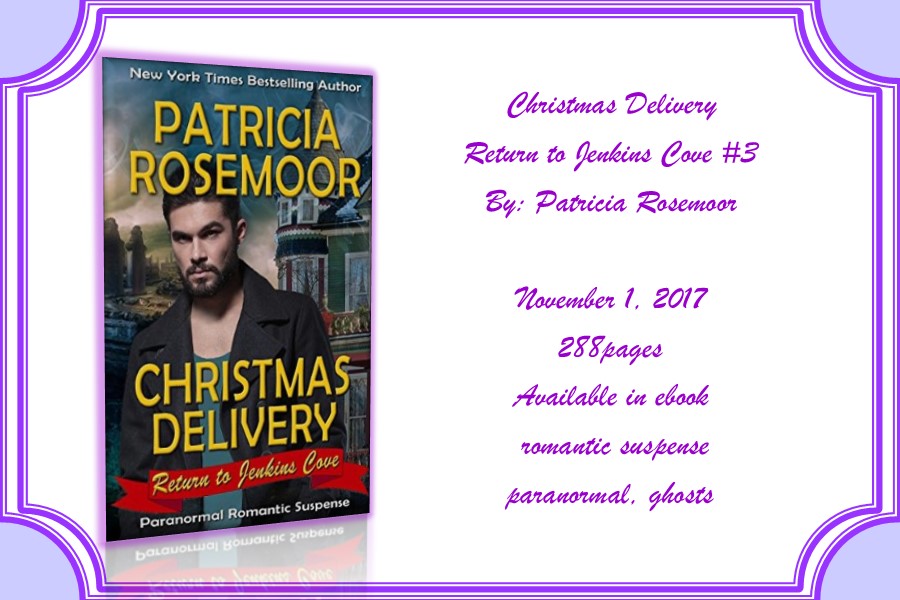 Christmas… Ghosts… Mystery… Romance…
Something evil lurks in the charming town of Jenkins Cove. When Sophie Caldwell devotes a room in her B&B to communicate with spirits, dangerous secrets rise to the surface, and the lives of three couples will never be the same.

Christmas Delivery (Return to Jenkins Cove Book 3)
Haunted by ghosts, Jenkins Cove will now have to deal with Simon Shea who has “returned from the dead” seeking revenge...only to reconnect with Lexie Thornton, the girl he loved, and the daughter they conceived thirteen years ago.

Christmas Spirit ...Christmas Awakening ...Christmas Delivery
Each of these stories are complete novels, but only the full series will get to the bottom of all the ghostly happenings in Jenkins Cove. Be sure to read them all!

The fog was lighter here, the chill greater, and once past the fence’s wooden gate, which had been left open, Simon realized where he was.

Why had the spirit brought him here?

Following the curving redbrick path lined by boxwood on both sides, Simon kept track of the mop of pale hair, which appeared on the other side of the hedge, then lost him altogether. When he came to the open area dotted with gravestones and markers, Simon only half hoped he would actually find him again. He gazed around, past a couple of large willow oaks and a magnolia tree in the center of the graveyard, then spotted the ghostly figure at a far gravesite, touching the stone that identified its occupant.

Again, he looked up with hollow eyes and gestured that he should come.

Reluctantly, Simon did. Not wanting to cross anyone’s grave — he’d had enough of that in his former life — he stayed on the brick path, keeping his gaze locked on the figure still summoning him.

One minute the fog seemed to circle the kid, the next he seemed to fade away into the mists.

But the demand came too late. He was already gone. And Simon was moving to the headstone he’d touched, had obviously wanted Simon to see.

A deep, arctic cold suddenly surrounded Simon and then the breath was knocked out of him as he stopped in the spot where the wraith had disappeared. Looking down, Simon understood why Lexie believed he was dead and buried. The headstone bore his name and the dates of his birth and of his supposed death on Christmas Eve thirteen years before.

Not a man who easily believed in what he couldn’t see, Simon had no doubts about who had led him here. Or who was buried in his grave. He was certain the kid he’d seen shot had taken his place.

Thirteen years ago and his ghost still wandered, unable to rest, Simon thought.

How many ghosts inhabited this area?

How many souls were denied eternal rest?

Of one thing he was certain. The boy he’d seen shot had been buried in his stead. How had they pulled that one off? They looked nothing alike. A closed coffin, then? How had he supposedly died so that no one would have raised the alarm? Who had been in on his supposed death?

Another reason for him to stay undercover awhile. So he could find the answers.

Did ghosts seek retribution? He wondered.

Considering the evil that had stalked the town unchecked, probably not.

But now the town had to deal with him.

Jenkins Cove is once again the setting for a chilling mystery and a wonderful second chance romance during the holiday season.

Simon and Lexie are spirited characters with lots of emotional angst that has readers empathizing with the characters and hoping for that happily ever after for this couple. Their story draws readers in from the very beginning and keeps them glued to the pages as the romance and mystery unfold. Overcoming the past is an obstacle that most everyone can identify with and reaching for the future is something everyone should definitely reach for and this story brings those two together with a bit of mystery and holiday cheer which makes this one enjoyable read. One that can be enjoyed while reading by the fire or while preparing for their own family holiday traditions.

There is never a dull moment as Simon and Lexie try to keep everyone safe while solving the mystery of what happened to force Simon away and to spice things up even more Simon receives help from a few ghosts along the way. While the book can be read as a standalone story, the overall questions and trouble that take place in Jenkins Cove are finally answered so really you should read all three to get the full enjoyment out of your visit to Jenkins Cove.

Christmas Delivery is the 3rd book in the Return to Jenkins Cove series previously known as A Holiday Mystery at Jenkins Cove.

The first book is Christmas Spirit by Rebecca York

Michael and Chelsea both are engaging characters that draw readers in with their holiday romance as both have to suspend their disbeliefs in order to push forward with their relationship. This keeps readers engrossed as they empathize with the characters while becoming caught up in the mysterious happenings that tests the couple’s beliefs.

The suspense builds as Chelsea and Michael try to figure out why someone is after them and what the ghosts are trying to tell them. This keeps the anticipation building as the reader tries to determine the outcome as well and I have to tell you that it was I didn’t see coming. The story is well written and the characters are developed which made it easy to feel as if I was part of the town and I shivered with delightful chills with each ghost visitation.

The second book is Christmas Awakening, by Ann Voss Peterson
When Marie Leonard returns to Jenkins Cove for her father’s funeral, she never expects to rekindle her romance with billionaire recluse Brandon Drake…nor to be haunted by the ghost of his dead wife.

Christmas Delivery is available in ebook at:

Patricia Rosemoor can be found at: