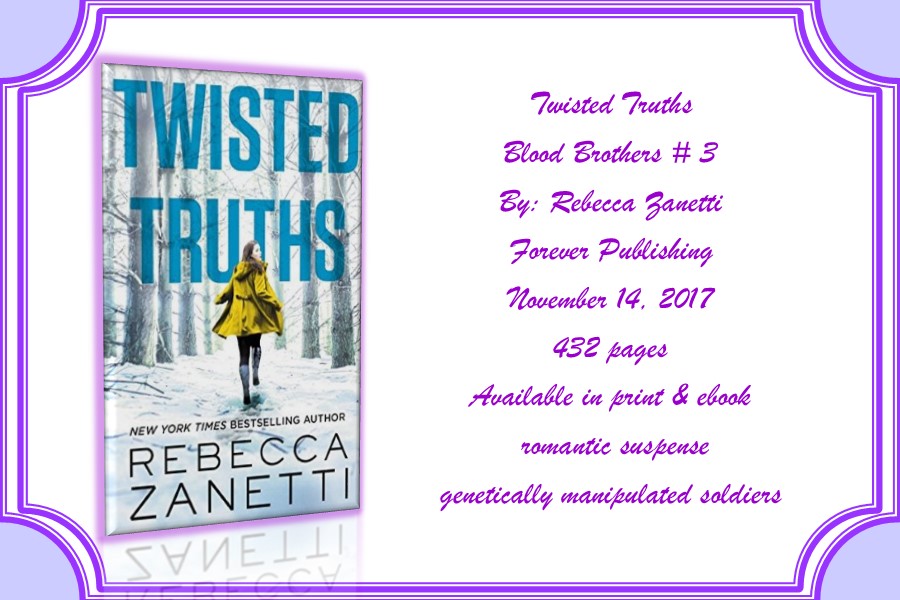 Noni is desperate. Her infant niece has been kidnapped, and the only person who can save her is a private detective with too many secrets to count--and more enemies than he can name. A man who walked away from Noni without any warning a year ago, a man who broke her heart. But with Talia's life on the line, Noni needs his help now more than ever--and this time, she won't take no for an answer . . .

The moment Denver Jones sees Noni, the memories come rushing back. The fire in her eyes. The determination in her voice. The danger of having her in his life. Denver had to push her away once, but now with vicious criminals threatening Noni and her niece, he'll do whatever it takes to protect them. But enemies from his past are circling, and they'll use anything--and anyone--to get to Denver.

With twists and turns that will blow you away, TWISTED TRUTHS is sexy, action-packed suspense at its very best from New York Times bestselling author Rebecca Zanetti.

There is danger and thrills galore in the final Blood Brothers book and that’s not to mention the turbulent romance.

Denver is confronted with the past when Noni a past romantic interest brings attention to their connection and puts herself in the cross hairs of the brothers’ enemies. Denver and Noni are strong, well defined characters that reach and grab readers by the heart strings as they battle with lots of emotional turmoil and dangerous encounters with some pretty nasty characters from both of their pasts. The romance is fiery hot with lots of passion and conflict which had me rallying behind the characters as they struggled to find a happy ending to their troubles.

Noni needs help with a daring task that makes her a target for some dangerous gang members and Denver, along with his blood brothers are still trying to stop the evil doctor that totally screwed with their lives. Noni and Denver’s life become one thrilling adventure as readers become caught up in their story when one hazardous and adrenaline pumping conflict after another keeps the characters on the run.

This fast paced and electrifying conclusion is chock full of hot and hunky men as the brothers are joined by the brothers from the Sin Brothers series as they come together to try to end the vile doctor and the despicable sheriff’s reign of terror. There was definitely not way for me put this story down as I was enthralled with the danger and the gravity to their situation from beginning to end.

The Sin Brothers is a favorite series of mine and now the Blood Brothers has become equally as loved and while I hate to see it end, I am quite pleased with the ending. I can’t wait to find out what Rebecca Zanetti has in store for us next.

Twisted Truths is the 3rd and final book in the Blood Brothers series.

You can read the 1st Chapter of Twisted Truths on the author’s website:

Twisted Truths is available in print & ebook at:

Rebecca Zanetti can be found at: