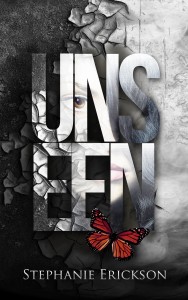 Mackenzie Day finally feels like she has her life in order when she graduates with a degree in music therapy. Music has saved Mac's life. Mackenzie's parents both died when she was young and her aunt, who saw Mackenzie as a burden, raised her. On top of that, Mac has always been different, she is able to read other's thoughts. This talent became too overwhelming for her when she started kindergarten and Mac was given an Integrated Listening Systems to help her tune out everyone else's thoughts, the iLs has been Mac's lifeline throughout her life. Just as Mac is ready to enter the career world, she stumbles upon a man whose mind she is unable to read. With this mysterious man, comes an invitation to join an even more mysterious group called the Unseen, a group of people who can read minds, just like her.

I loved the premise of this story and enjoyed Mackenzie's character. It was a quick-paced read. I loved Mac's character for her perseverance. Even though the constant bombardment of other people's thoughts has made Mackenzie's life difficult, she has found comfort with her iLs and was able to graduate with a degree in music therapy with hopes of helping other kids the same way she was helped with her listening system. Everything changes when the Unseen comes along. They offer Mac everything that her childhood did not. Mac is very skeptical at first, but Owen, a very handsome mind reader, helps to convince Mac that the Unseen is where she belongs. I was a little dismayed that Mac gave up her dreams with music therapy to join the Unseen, especially since a hot guy was involved in her decision. However, once Mac starts her training, it is obvious that the Unseen is where she belongs. Part of the reveal at the end was obvious to me, but I'd still like to see where the story goes.

This book was received for free in return for an honest review.