They are called Feral Warriors—an elite band of immortals who can change shape at will. Sworn to rid the world of evil, consumed by sorcery and seduction, their wild natures are primed for release...

The most enigmatic and tortured of the Feral Warriors, Wulfe is haunted by the quiet beauty of a human woman who no longer remembers him. Once a captive of both the Mage and the Ferals, Natalie stole a piece of his heart before he took her memories and sent her safely back to her fiancé. But now the Mage are threatening her again, and Wulfe will risk anything to protect her.

Natalie Cash is stunned when she's saved by a wolf who shifts suddenly into a splendidly built, if badly scarred, man, a man with the kindest eyes. Swept into a world of intrigue and danger beyond her comprehension, she turns to the powerful Wulfe, finding a passion she'd only dreamed of. But when time runs out, they must trust one another and surrender to a wild, untamed love.

The eighth book in the Feral Warriors series keeps the reader on the edge of their seat. I have followed this series from the beginning and I love each and every story and this book did not disappoint.  I love the way the author brought Wulfe and Natalie’s story together and the part they played in the war.  I also loved the way she ended this great story and that she has not only introduced more characters, but also potential for more with the new races of paranormals, giving the series lots of possible future outcomes. 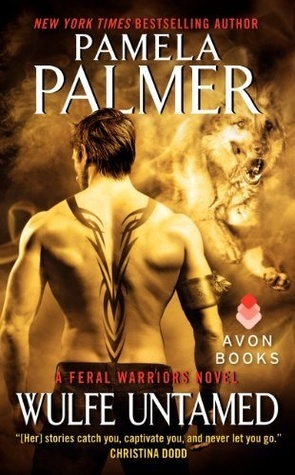 Eons ago, before the rise of human civilization, two immortal races battled the Daemons for control of the earth. The Mage, or magic ones, and the Therians, the mighty shape-shifters. Though traditional enemies, the Mage and Therians banded together to overcome the High Daemon, Satanan, ending his reign of terror and destroying his armies. The cost of victory was high. To win that ultimate battle, both races were forced to mortgage nearly all their power. Only one Therian among each of the ancient lines of shape-shifters was left with the power of his animal. Nine remain.

They are the Feral Warriors.

More information on the Feral Warriors:

Pamela Palmer is theNew York Times, USA Today, and international bestselling author of more than a dozen novels including both the Vamp City andFeral Warriors series. When Pamela's initial career goal of captaining starships failed to pan out, she turned to engineering, satisfying her desire for adventure with books and daydreams until finally succumbing to the need to create worlds of her own. Pamela lives and writes in the suburbs of Washington, D.C.

For more books by Pamela Palmer: