Hello, Readers! February is off to a great start and I am participating in a virtual book tour for a paranormal romance by Sky Purington – Viking’s Intent! Enjoy & don’t forget to enter the giveaway! Part of a burgeoning ancient prophecy, Shea's sole focus is to protect her sisters.

Not become mated to a Viking of her dragon ancestor's choosing. If that happens, she might lose not just her independence but a matchmaking gift that brings people together. A gift at risk when she's kidnapped by a stubborn, frustratingly handsome barbarian who takes her on a whirlwind adventure through tenth century Scandinavia.

Though at odds with the twenty-first century beauty from the moment he meets her, Viking Davyn Sigdir steals Shea away to keep her safe from multiple enemies set on making her theirs. Unfortunately, he underestimates how alluring she can be when it suits her. How feisty and headstrong she is as she tries to outwit him at every turn. Yet the fiery strife between them only draws them closer, and soon their unwanted attraction becomes hard to resist.

Determined to control their own fate, they devise a bold plan to trick their adversaries. One that could keep Shea's matchmaking gift intact plus end the prophecy and ongoing war. All they have to do is get along and not give into temptation which should be simple for two people determined to remain apart. Or so they hope as a passionate high-stakes war of hearts ensues in Viking's Intent.

Viking's Intent is the 3rd book in the Viking Ancestors: Rise of the Dragon series. 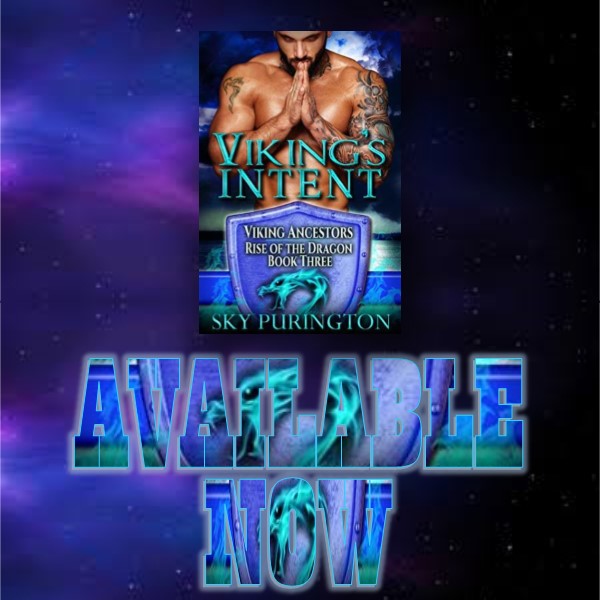 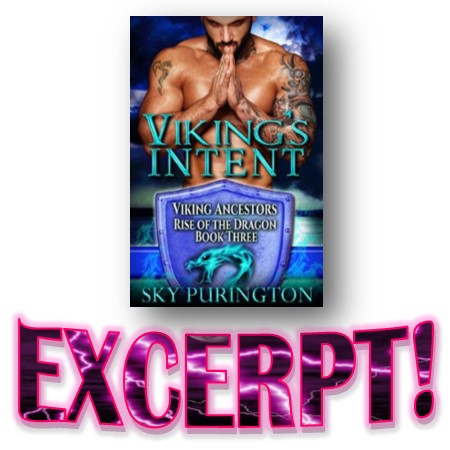 Once the challenge had been laid, and he truly accepted it, Davyn only saw red as he went at Shea. As he fought her as he would any other. Of course, he had fought women on occasion. Those who trained here to be warriors. But he had never fought a woman like Shea. One who wanted blood and was more skilled than most.

Far more skilled as it turned out.

Something he soon learned as he went at her with a fury that seemed to saturate him. He knew some of it was jealousy from what he had witnessed with the twins, but it was more than that. Rage from somewhere else. Another time and place.

It was also deep-seated anger that she had risked her life like that.

He kept all thoughts from her as they began battling. Axe against axe then sword against mace. An interesting dance as he slashed and she swung. Yet they fought through the red haze of their dragon eyes, her movements talented and fast as he dodged her again and again only for her to dodge him over and over.

They were well matched and rarely got one over on the other as both became slick with sweat. Though it took a great deal of strength, he never became distracted by the way she moved her slender yet curvy body when battling. There was a sensuality about it that he knew she did on purpose. Another means to distract him. Disarm him.

“I knew you were a jerk,” her thoughts eventually drifted through his mind as they battled harder and his ability to keep her at telepathic bay weakened. As they tossed aside their sword and mace and began a whole new type of dance with daggers alone. “But not this much of one. Not this clueless of one.”

“I did nothing,” he reminded aloud as they circled and clenched two daggers each. “You did it all, Cupid. You drew them to you to get what you wanted.”

“I did,” she agreed through clenched teeth as she stabbed at him, but he evaded. “And what I wanted will help us, or did you not get that?”

“What you got nearly had you kidnapped, then likely put through unimaginable torture,” he growled, stabbing his dagger at her in rapid succession as she did the same before both evaded and spun.

“Yet all the while you smiled, flirted,” he ground out, angrier by the moment. “All the while, you seemed to enjoy it…them.”

She released an inhuman, borderline dragon-like sound as she came at him so hard, slicing and dicing, that he stayed inches away from her angry, relentless blades before stumbling. When he did, it was enough for her to take advantage with alarming precision. The next thing he knew, she slammed him down on his back, straddled him and wedged one dagger against his throat and the other, yet again, against his balls.

“No,” she roared when he started to make a move. “Stay still or I will end first your manhood then your life, beast.”

His body trembled in response to a variety of things. The rush of battling a worthy opponent. The jealousy he still felt at what he had witnessed today. The rage he felt because he couldn’t protect her better. The fear he felt because her life was on the line.

Then there was her appearance right now.

Her skin sheening and sparkling, she appeared to be a wild dragon angel who’d come for his soul with her hair stuck up at odd angles and her cat-like eyes riotous as she glared down at him. Her chest heaved, and her nipples were pebbled. Her slender, toned thighs clamped around his waist and her hot center about burned through him.

“What do you want, Cupid?” he grunted, as aroused as her in an instant. He was barely able to focus on anything but what it would feel like to be inside her. Yet he kept it together enough to position his blades against her calves.

“Now you ask what I want,” she said, her teeth still clenched as the corner of her mouth curled up in obvious appreciation of his blade positioning. “And here you call yourself a thinker.”

As their eyes held, he finally caught a glimpse of something other than pride that she had done so well handling those twins. He finally saw something other than cockiness that she had gotten answers that still had him puzzled. That still made his inner dragon roar and rage and battered at his subconscious in ways he didn’t understand. What he saw in her eyes now wasn’t what he expected. Wasn’t what he wanted to see. Not ever when he looked into Shea’s eyes. 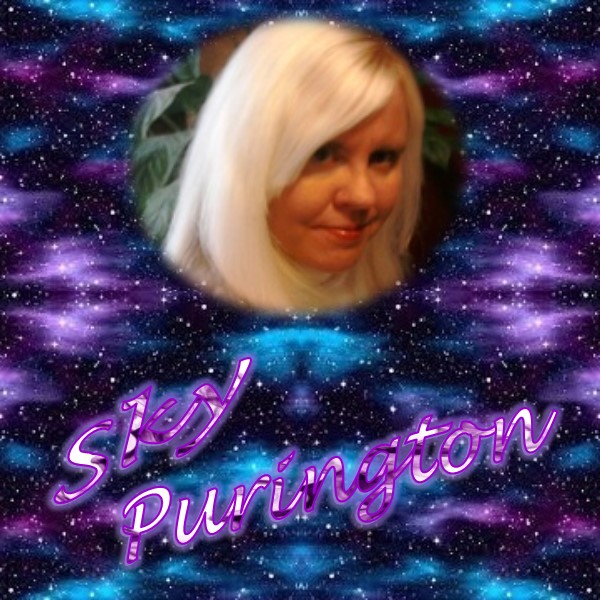 Sky Purington is the bestselling author of over forty novels and novellas. A New Englander born and bred who recently moved to Virginia, Sky was raised hearing stories of folklore, myth, and legend. When combined with a love for history, romance, and time-travel, elements from the stories of her youth found release in her books.

Purington loves to hear from readers and can be contacted at Sky@SkyPurington. Interested in keeping up with Sky’s latest news and releases? Either visit Sky’s website, www.SkyPurington.com, subscribe to her quarterly newsletter or sign up for personalized text message alerts. Simply text 'skypurington' (no quotes, one word, all lowercase) to 74121 or visit Sky’s Sign-up Page. Texts will ONLY be sent when there is a new book release. Readers can easily opt out at any time. 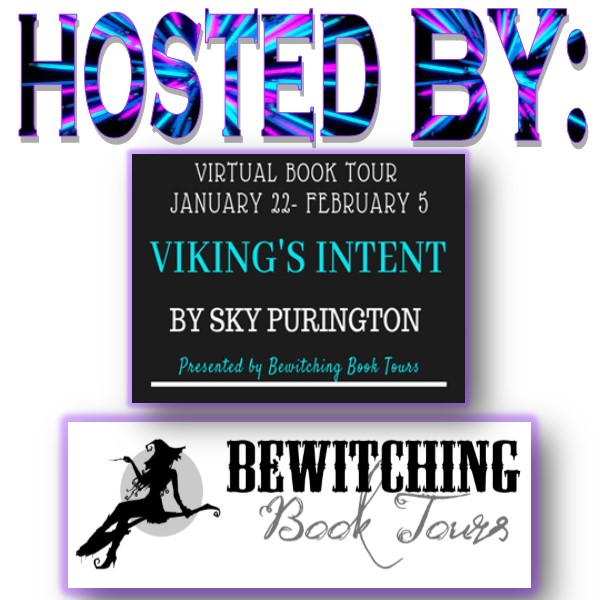