Review: Hooked on a Witch (Keepers of the Veil #4) by Zoe Forward 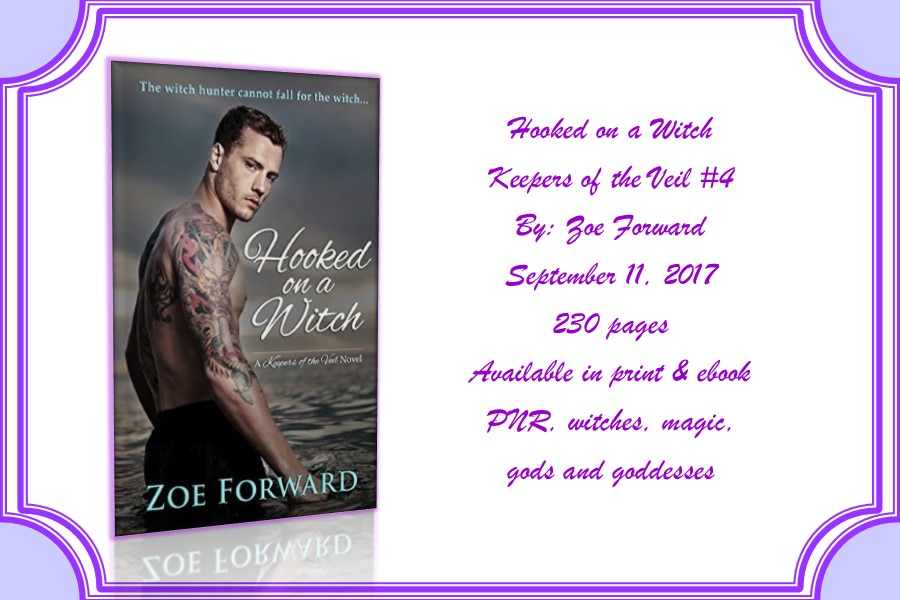 Pleiades witch Shannon Randolph has been framed for a theft she didn't do. She has one week to return a stolen relic to the god it belongs or she'll be executed. What's worse? Evil magic-wielding wackos are coming out of the woodwork after her to get it. But the biggest danger is Merck. This sexy, dangerous witch-hunter who understands all forms of magic might be her only hope. Enlisting his help may require she be a very naughty witch.

The moment Shannon strolls back into Jason Merck's life he's in trouble. There's something about the witch he can't resist, but he must. The witch hunter can't fall for the witch.

Hooked on a Witch is a spectacular addition to the Keepers of the Veil series, it has everything one needs to be able to hop dimensions and fight evil.

The romance between Shannon and Merck is a see saw of emotional upheaval that is complicated by family, friends secrets and most of all bad guys coming out of the woodwork. Both are strong characters that readers can not only relate to but really become involved in the drama of their lives. Merck has a sexy mysterious, secret wielding vibe going on that shows readers how hot he is but also how vulnerable making a definite book boyfriend.

Thrills and chills keep readers on the edge of their seat as we get to the suspense and boy is there a lot of that going on because the romance itself is full of it, especially with all of its ups and downs and the story has villains everywhere, a few secrets, a lot of magical action, and quite a few gods, goddesses and other powerful beings involved which also means that the story is full of action and surprising twists.

Secondary characters play strong supportive roles that help make this story one to remember but if you haven’t read the first books in the series them I strongly recommend that you do because this one picks up where Playing the Witch’s Game lets off and although the story gives readers enough information to keep up if you haven’t read the previous books, I feel that readers just wouldn’t get the whole effect and full understanding of just what is happening in this world full of Greek mythology.

I thoroughly enjoyed reading Hooked on a Witch and I can’t wait to read the next Pleiades witches book and find out where Zoe Forward takes the series next.

Hooked on a Witch is the 4th book in the Keepers of the Veil series.

Hooked on a Witch is available at:

Zoe Forward can be found at: