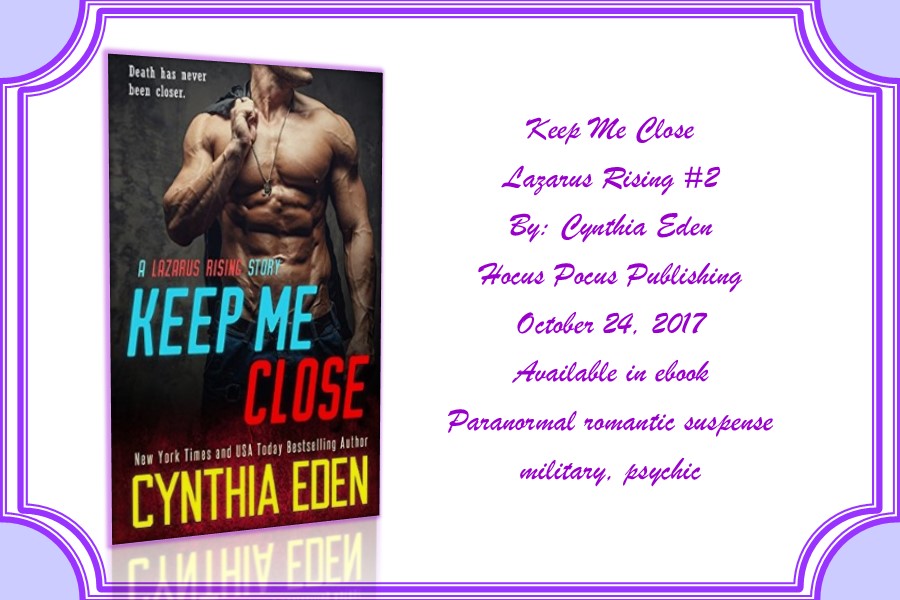 As a highly trained Navy SEAL, Flynn once worked covert missions for the U.S. government, but then his life was stolen away. Killed and placed in the secretive “Lazarus” program, Flynn was brought back from the dead and turned into a super-soldier. Now he has increased strength, enhanced senses, and a few psychic bonuses that he fights hard to keep hidden from the rest of the world. He also has no memory of his past…and a new, twisting darkness seems to be growing inside of Flynn.

Cecelia Gregory escaped death once. Can she do it again?

Dr. Cecelia Gregory was supposed to help the Lazarus test subjects. They didn’t have control of their emotions after the experiment, and her job as a psychiatrist was to break through the walls that the men had created. Too late, Cecelia realized that the Lazarus subjects were far more dangerous than she could ever imagine. The men came back from the dead, but some of them came back…wrong. Now one of the subjects has a dark obsession with Cecelia. The man known as Subject Five is hunting her. And he wants her dead.

One man wants to kill her, but another just…wants her.

Flynn feels a connection to Cecelia that he can’t deny. Not some sweet, innocent attraction—a consuming lust that makes him crave her all the time. Flynn knows that his feelings aren’t normal, but protecting her is his mission now. The man hunting Cecelia is just like Flynn—all the same enhancements, all the same strengths. And no weaknesses. One big difference, though—Flynn doesn’t plan to lose Cecelia. And he’ll fight his own darkness to prove his worth to her.

The second book in the Lazarus Rising series just may have surpassed the first!

Flynn and Cecilia’s romance was touched on in Never Let Go as they were the main secondary characters but let me tell you that it in no way prepared me for just how turbulent and emotional their road to happiness would be. Of course, the sizzling attraction that flared every time they were in each other’s company proved to be undeniable as this couple grabs reader’s hearts and have them holding their breath. Cecilia’s past tugs at emotions while providing ammunition for the bad guys in some disturbing turns and Flynn may be a bit rough around the edges but that didn’t stop me from developing a major crush on this tormented soldier.

Keep Me Close drives readers to the edge with thrills and surprising twists in a plot that plot that is a perverse maze of obstacles and betrayals. The story retains its page turning status as new characters are introduced previous characters reappear including one of the bad guys who delights in the torment of Cecilia. The story draws a range of emotions from readers including curiosity, wrath directed at the enemies and empathy toward characters as they deal with all of those obstacles that are thrown in their paths to happiness.

I was so looking forward to reading Keep Me Close as I just read Never Let Go, so as soon as I got this one, I started reading and was delighted when I couldn’t put it down until I had read every last word. Once again, Cynthia Eden has created a world full of thrilling suspense, dynamic characters, and an original plot that guarantees that readers want more, which means I am waiting impatiently for the number three, which thankfully is due to be released in December.

Keep Me Close is the 2nd book in the Lazarus Rising series!

Keep Me Close is available in ebook at: