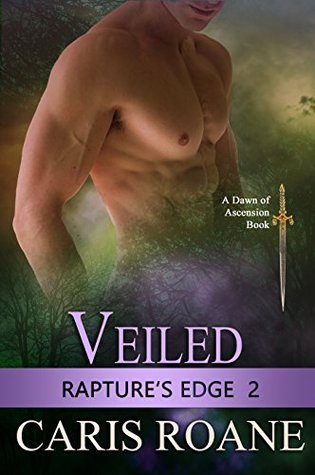 Duncan wants to love his woman, but he’s tortured by his past…

For the last few weeks, since Warrior Duncan professed his intention ‘to try’ to make his relationship with Rachel work, he’s failed on all fronts. But how can he explain that a serpent lives in his gut, poisoning him against her? As his visions return in full-force, and the black ops team heads back to the Third Earth darkening grid, he must confront his demons or lose everything he holds dear. But will Rachel be there for him?

Rachel longs for her breh, her vampire mate, but old issues keep tearing them apart…

Rachel refuses to give up on Duncan. Though he’s remained aloof because of his tortured past, she needs him more than ever. Her desire for him has reached outrageous levels as the breh-hedden continues to keep her focused solely on the man she loves. But will he finally be able to let go of his past suffering and embrace a life with her?

Veiled: Rapture’s Edge Book 2 is a paranormal romance novel, a vampire romance with a fantasy edge, of the Rapture’s Edge Series. Awakening is Book 1 of the Rapture’s Edge Series. The series is preceded by two related books: BRINK OF ETERNITY and THE DARKENING. RAPTURE’S EDGE is part of the Guardians of Ascension Saga! Caris Roane is the author of seventy-six published works, twenty-six of which are paranormal romances featuring hunky, military type vampires who are tortured heroes in need of worthy women. http://www.carisroane.com/

Rachel refuses to give up on Duncan even though old issues continue to tear them apart but she needs him more than ever in this thrilling Rapture's Edge installment.

Duncan's issues have him keeping Rachel at arm's length even while they are trying to form the Black Ops team but their stalled relationship may be what's holding their growing abilities back and the reader can't help but get drawn into the emotional conflict that is tearing them apart. Duncan and Rachel's attraction to each other has not waned at all so the sex scenes continue to be hot and steamy while the fast paced and smooth flowing plot continues to enthrall readers with lots of suspense, excitement and passion.

Some secrets are revealed, visions of future possibilities occur and dangerous missions all adds lots of action and spice to the story raising the anticipation level to one that puts readers on pins and needles. The well orchestrated events of the well written scenes and details ensure that there is never a dull moment and unexpected twits keeps the characters as well as the readers on their toes.

There is no way I could put the story down once I started reading it and with that awe inspiring and surprising ending I sure can't wait to read the final episode of Duncan and Rachel's story.