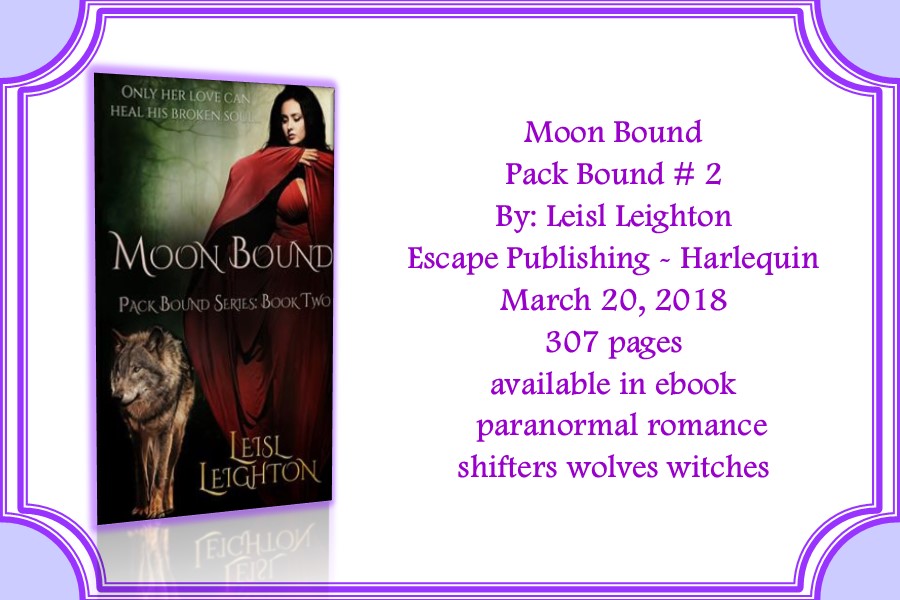 Only her love can heal his broken soul...

Five hundred years ago, facing extinction, a group of powerful witches united to create a pact with the Were to save witch-kind. The pact expelled an ancient evil, known only as the Darkness, that was blocking the Were from their wolves. With the Darkness destroyed, the Packs and their Covens grew strong as they thrived beside each other in their brand-new world.

Wiccan Healer-Witch Bronwyn Kincaid wants a quiet life. Her new powers have other ideas. Her increased healing magic and empathy mean she can’t ignore the plight of River Collins, a wolf brought up thinking the animal inside him is an evil he must forever suppress. If Bronwyn can’t control her powers and help River accept his wolf, the evil Darkness that hunts the Were will use them to destroy those they love.

I have to say that the Pack Bound series is off to a great start, the first book Pack Bound was an exciting read and now Moon Bound is one thrilling read that had me glued to the pages.

Bronwyn and River are strong, compelling characters that readers can’t help but fall for and cheer them on toward their happily ever after, their romance is full of emotional turbulence and the story invokes a gamete of feelings in readers throughout. The romance is sweet and the chemistry between Bronwyn and River has sparks flying but due to several issues has them both turning away which certainly keeps readers filled with suspense.

The plot is fast paced and full of thrills, intrigue and danger with the pack’s enemies coming back to try and destroy them once again adding suspense and excitement to story while also keeping reading readers on the edge of their seat with anticipation of just what those enemies will do next and what the Pack will do in retaliation. Oh and the antagonist is one that still sends shivers down my spine and has me continually trying to guess just what she is going to come up with next.

The Pack Bound world is definitely fascinating and full of intrigue which ensures that I am going to keep coming back for more, but while I find some things unexpected, there are a couple of predictable elements but not enough to keep me from enjoying the story and I can’t wait to visit with Pack McVale again in Shifter Bound which will be released in April.

Moon Bound is the 2nd book in the Pack Bound series.

Moon Bound is available in ebook at:

Leisl Leighton can be found at: