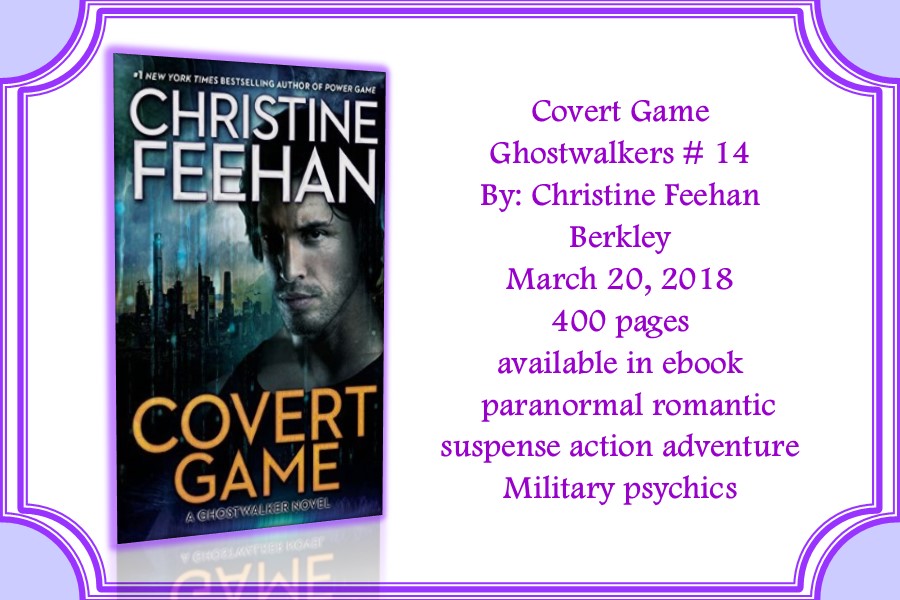 The GhostWalkers deal with the explosive fallout from Power Game in the lastest suspenseful novel by #1 New York Times bestselling author Christine Feehan.

Treason, torture and temptation haunt the GhostWalkers in their most dangerous adventure yet, as Christine Feehan's #1 New York Times bestselling series hits an explosive new high.

Rescuing an industrial spy from the hands of a criminal mastermind is a suicide mission for the GhostWalkers. And there's no one more up to the task than Gino Mazza. He's the perfect killing machine—a man driven by demons so dark and destructive that his blighted soul has given up trying to find solace. But his laser-sharp focus on his target has transformed into something nearing desire.

A treasonous senator dangled top secret GhostWalker data in front of a Chinese crime lord, and he bit. Zara Hightower, one of the world's leading experts on artificial intelligence, was sent in to psychically wipe the crime lord's computer network. She succeeded, but at a huge cost. Now she's the captive of a man who has descended into paranoid madness. Torture and death await her...

But GhostWalkers never leave one of their own in enemy territory. And it's up to Gino to save Zara, or kill her if it turns out she's led them into a trap. Either way, heaven or hell won't stop him...

The GhostWalkers are back in another exhilarating book, one where I was completely thrilled to read. There was lots of action and adventure that got my blood pumping and intriguing suspense that had me biting my nails and the chemistry is off the charts electrifying.

Gino and Zara are strong, exciting characters that stir emotions and captivate readers with their story. The romance is sweet but oh so hot with Gino’s alpha protective personality and Zara’s tough but sweet vulnerable personality, so they are a bit opposite but it works fantastic for them as it sure generates some raging hot heat and keeps readers enthralled with the relationship as it grows.

Hair raising suspense builds from the very beginning as Zara finds herself in hot water and keeps right on building throughout the story which keeps readers on the edge with lots of thrills.  Whitney is back of course with his usual tricks and total disregard for human life but the GhostWalkers have a new set of enemies that were introduced in Power Game and let me tell you I would to blow this bad guy to smithereens. There is lots of danger with explosive action throughout the book and also a disturbing torture scene involving Zara that adds to the emotional impact of this fast paced plot.

Christine Feehan is one my favorite authors and the GhostWalkers world is of my top favorites. It is paranormal but it is also a tough action series that really gets the adrenaline pumping and makes hearts pound with some uber hot and sexy heroes and heroines. Covert Game is definitely that and more and there was no way I could put it down until I had read every last exhilarating page, of course, my family was not very happy about this and kept trying to interrupt but Gino and Zara held my complete attention.

Covert Game is the 14th book in the GhostWalker series.

Shadow Keeper (Shadow #3) is the next Christine Feehan book to be released.

Covert Game is available in hardcover & ebook at: