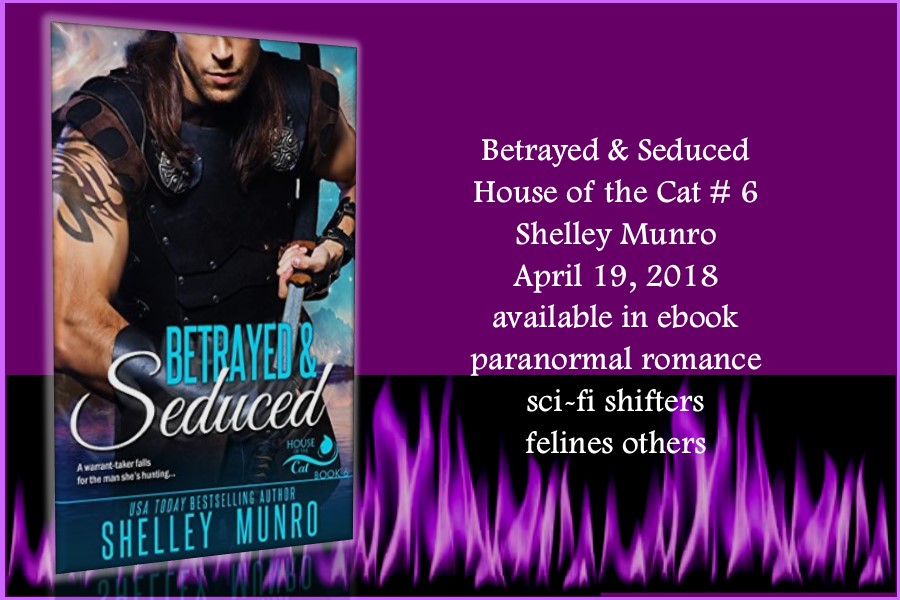 A pilot on the run. A warrant-taker determined to make a capture. The mating-dance that threatens to destroy them both…

Warrant-taker Jazen Lav accepts one last assignment before she retires to follow her dreams. She’s hot on the trail of a runaway cyborg, but the path leads to the crew of the Indefatigable and they’re a tight-lipped bunch. Frustration steers her to an undercover gig as a nurse, which places her in the sights of the flirtatious Indy pilot.

Nanu left his home planet at a young age, missing the last crucial elements of his training before he hit adulthood. The inner beast he thought dead leaps to life on meeting Jazen, taking him by surprise and tossing him into confusion. His inner beast insists Jazen is his mate, but she’s trouble for him, trouble for his friends, trouble for his future.

Abduction and betrayal—not the best way to start a courtship, and that’s where the turmoil begins since danger stalks into the city with Nanu and Jazen directly in its sights…

Betrayed & Seduced is one hot and fascinating read! The Indefatigable crew is back and I couldn’t be happier as the story starts off with an exciting event and keeps the thrills coming from there. Nanu and Jazen are strong characters with lots of sizzling chemistry that keeps the pages heated with smoldering desire and lots of smoking hot passion. The couple has some major obstacles to overcome if they want their happily ever after, but even that is in question until the very end as Jazen’s issues get in the way. The story immediately gets the adrenaline pumping and keeps the readers on the edge of their seats with lots of excitement, intrigue and a couple of betrayals that has quite the impact on the couple.

Shelley’s charming and intriguing House of Cat world just keeps getting better and I have to say that Shelley Munro has outdone herself with this one, as usual she brings her world and her characters to vibrant life and paints such vivid imagery that it easy to become caught up in the story as the readers picture each and every scene and in this case she gave Nanu some very intriguing and sexy characteristics that set the imagination on fire right along with Jazen and I was totally caught up in their story from the get go and I couldn’t put it down until I had read every last word. And since she set up the next book, with some intrigue already, I have to say that I am a bit impatient to read Enticed & Seduced to find out what happens.

Betrayed & Seduced is the 6th book in the House of Cat series.

Betrayed & Seduced is available in ebook at:

Shelley Munro can be found at: