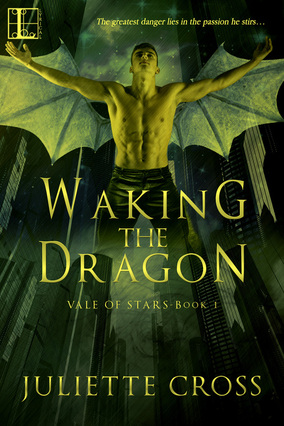 The Gladium Province is on the verge of civil unrest as humans and Morgons, the dragon-hybrid race, clash once more. But amid disorder can also arise passion.

Descending into the dark underworld of Morgon society, Moira is paired with Kol Moonring, Captain of the Morgon Guard, for her protection. Fiercely independent, Moira bristles at his dominance, and defies his will at every turn. Yet resistance proves futile when passion flares between them, awakening powerful emotions within both, body and soul. But as the killings continue, can their fiery newfound bond survive an even greater evil—one that threatens all of humanity, Morgonkind, and Moira’s very soul?...

Fiercely independent Moira Cade bristles at Captain Kol Moonring’s dominance but when an evil threatens all of humanity, Morgonkind and her very soul, she’ll have to pray that their newfound bond will survive in this sensational paranormal romance.

Moira’s determined to solve the murders of the three young woman even if that means setting herself up as bait and the reader can’t help but get drawn into the sexy and sizzling romance as Kol is sent in as her protection and they fight their growing passion with some pretty heated firework inducing clashes. The attractions burns pretty hot but the relationship has a very big roadblock – both Kol and Moira are stubborn and determined to not give in to their growing desires. The characters are strong, compelling and demand attention from the very beginning while the fast paced and smooth flowing plot thrills readers with lots of suspense, excitement and romance.

Tension and expectation builds throughout the story as the danger escalates and the more Kol and Moira discover they realize that the enemy has a very diabolical plan that threatens humanity and Morgonkind and then the excitement picks up even more as their investigation brings Moira to the enemy’s attention and she becomes essential to those plans. The well written scenes and details capture the imagination while the suspenseful events ensure that the reader can’t put the story down and surprising twists keeps readers on their toes.

I was completely spellbound from the very beginning, the world is an intriguing alternate reality with interesting and unique elements and fascinating characters. This is the first story that I have read by Juliette Cross and I have to say that I will definitely keep her on my to buy list and while this is the first in the Vale of Stars series, it is the sequel to the Nightwing series and though I had no trouble following the story, I do feel as if I missed some background because of all the characters involved.

Vale of Stars is the sequel to the Nightwing series:

Juliette calls lush, moss-laden Louisiana home where the landscape curls into her imagination, creating mystical settings for her stories. She has a B.A. in creative writing from Louisiana State University, a M.Ed. in gifted education, and was privileged to study under the award-winning author Ernest J. Gaines in grad school. Her love of mythology, legends, and art serve as constant inspiration for her works. From the moment she read JANE EYRE as a teenager, she fell in love with the Gothic romance--brooding characters, mysterious settings, persevering heroines, and dark, sexy heroes. Even then, she not only longed to read more novels set in Gothic worlds, she wanted to create her own.