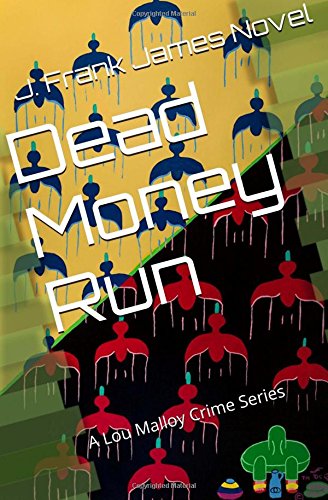 I started Lou Malloy’s story in the novella, The Run Begins. It is an introduction into Lou’s character and not necessary to read before Dead Money Run by J Frank James.

Lou has a quick temper and a chip on his shoulder. He is rough and tough, but principled, in his own twisted way. On an impulse, he left the small town he grew up in and that is how he began his Dead Money Run.

Dead Money is money that is gotten illegally and has been laundered, whether from drugs, prostitution…

Lou was being released from prison for stealing 15 million dollars from a casino that is owned by the mob. He has no family left since the murder of his sister and he wants her killer. The mystery leads him in a direction he didn’t see coming.

There are layers of criminals and mysteries. Lou is a bad guy and nothing can change that. Have you ever read a book where there really is no good guy, just different levels of bad, brutal, crossing and double crossing villains? When Lou teams up with Hilary, I find myself rooting for this Bonnie & Clyde couple.

Dead Money Run is a convoluted and tangled web. When the pieces are put together, the puzzle was not what I thought it would be and I am delighted. I like when the answers are not obvious and I want more of this tough, just as soon shoot you as look at you lead character and his moll.

If blood and guts noir mysteries are on your reading list, this is one you will want to add.

I received a copy of Dead Money Run by J Frank James in return for an honest and unbiased review.

The warden was a small man, but dressed neatly. Everything about him was neat-from his hair to his shoes. He was almost too neat.

“So what are your plans, Lou?”

When I walked into the room, the warden turned over a little hour-glass full of sand. We both watched it for a few seconds and then looked at each other. This was the first time I ever met the man. What did he care about me now? Since he never cared before, I figured the man was just looking for information. Perhaps he wanted to give me a warning. I didn’t say anything.

“Do you ever think about time, Lou?”

“After fifteen years, what do you think?” I said.

He smiled and said, “Most valuable thing we have and no one seems to mourn its passing until it’s too late.”

I had nothing to say to that. Conversations with a prison warden came with a lot of maybes. While in prison I trained myself to watch a man’s hands. If he rubbed his hands in a washing motion, he was lying. If he messed with his fingernails, he wasn’t interested in the conversation. The warden was rubbing his hands as if he had touched something distasteful.

“I haven’t given it a lot of thought, Warden Edwards.”

“Call me John, Lou. We’re friends now,” Edwards said while rubbing his hands in a determined kind of way.

So now we were friends. I wanted to tell him he was a liar, but my better judgment stopped me. Probably a good way to delay my release-things get lost, papers go unsigned. Things happen.

“You know, we never found the fifteen million,” he said.

“I didn’t know you were looking for it.”

I watched his eyes flicker briefly. I seemed to hit a sweet spot.

“No, Lou. You misunderstand,” he said as he caught himself. “There is a reward for the recovery of the money. Did you know that?”

Edwards said it more as a statement than a question. I said nothing and waited. Edwards shifted in his chair and started to rub his hands again.

“It would be in your best interest to tell them what you know.”

“They’re the people looking for the money.”

I thought about that for a few moments. The statement covered a lot of ground.

“Since I didn’t take the money in the first place, I don’t have anything to tell them. They need to ask the people that took it,” I said.

Edwards was smiling now and he stopped rubbing his hands.

“There are some people that think you do.”

“I can’t help what people think.”

“Ten percent of what,” I said.

“The money, Lou. Ten percent of fifteen million is a lot of money.”

“Yeah, it seems the Indian casino had insurance. The insurance company that paid off on the claim put up a ten percent reward for the return of the money. A million five is a lot of money.”

Edwards blinked his eyes signaling he was moving on to something else.

“Sorry to hear about your sister,” he said. “I understand they are doing all they can to find her killer.”

Edwards was a real card and running out of things to say. On any other day, in any other place, he would be dead or wishing he was.

“Thanks, John. Your words are real comforting,” I said and returned my gaze to the little hourglass and the sand as it accumulated on the bottom.

I had nothing else to say except make him happy. Make them all happy. Just one big happy group sitting around smiling at each other; happy, happy, now let’s just get the money and spread it all around and we can go on being happy. In the meantime my sister lies in a hole feeding worms. I had money on the worms being real happy. No word on how my sister felt.

Edwards looked disappointed when I didn’t add to our conversation.

“Lou, it might be a good idea for you to help them find the money. It could be a big windfall.”

Now we were getting somewhere. Just like all the rest of the treasure hunters, the miserable bastard was just in it for the money.

As if tasting a lemon, Edwards twisted his face and, at the same time, waived his hands at an imaginary fly.

“I’m not sure what you mean, Lou. I’m just trying to give you a head start. If it was my decision, you would still be with us. Fifteen million dollars is a lot of money to lose.”

I sat and watched Edwards shift in his chair some more. We had nothing left to talk about. I could feel him working out in his mind how he was going to present his failure to get a lead out of me on the money.

“So, what are you going to do now?” Edwards said.

Finally, I had enough.

His smile vanished. He knew he was wasting his time on someone who had maxed out. He also knew he couldn’t hold me. There would be no parole violation with the threat to re-incarcerate me. No work release effort to rehabilitate me. Just a new suit made in the prison cut and sew area and a hundred bucks was the sum total of it. That probably hadn’t changed since the 30s. I wondered if Al Capone wore the suit they gave him when he got out.

We were both looking at the little hourglass of sand now. The sand had drained from the top of the glass to the bottom. Suddenly, as if being shot out of a cannon, we both stood up. Edwards stuck out his hand. I turned and left the room. I didn’t shake his hand. I didn’t want to touch him.

Lou Malloy learns of his sister’s death right before he is released from prison, having served 15 years for the theft of $15 million from an Indian casino. He wants two things: to keep the $15 million, which no one has been able to find, and to track down and punish whoever killed his sister.

Lou Malloy teams up with Hilary Kelly, a private investigator. In no time, Lou has found the hidden $15 million, recovered guns and ammunition hidden with the money, and murdered two low-level mobsters and fed them to the crocodiles.

“Dead Money Run is a hard-boiled thriller. It is a book of short chapters and almost unrelenting excitement as Lou and Hillary Kelly avoid cops, kill mobsters, and try to unravel the mystery of who killed Lou’s sister and why.” – Reviewed by Wally Wood at BookPleasures.com

“Fans of James Ellroy and Elmore Leonard are going to love James’ ingenious capers, devious characters and wry humor. The entire book goes down like a strong yet smooth shot of bourbon.” – Reviewed by BestThrillers.com

“Dead Money Run by J. Frank James is a pure adrenalin rush from the very beginning. Yes, it is very violent with some strong language, but filled with excitement that keeps the reader wanting to know what comes next.” – Reviewed by Paul Johnson for Readers’ Favorite

“J. Frank James did a very nice job constructing a fast moving plot for Dead Money Run. It is intriguing and thrilling. However, the reader should be prepared for a bit of gruesome violence. Yet, the violence doesn’t override the mystery and suspense within the story. Hold on to whatever it is that you’re sitting on as you read this story, because James is about to take you on a wild ride.” – Reviewed by Red City Review

To learn more, go to http://www.jfrankjamesbooks.com/