Are They Human? Novus by Crystal Marcos

The simple cover of Novus, The Cresecren Chronicles, by Crystal Marcos hides the action inside.

If you like apocalyptic/dystopian adventure with characters that will win your heart, then Novus is for you. This is a series, so we will follow Cayden and his mismatched band of “family” as they struggle to survive and create a new world. 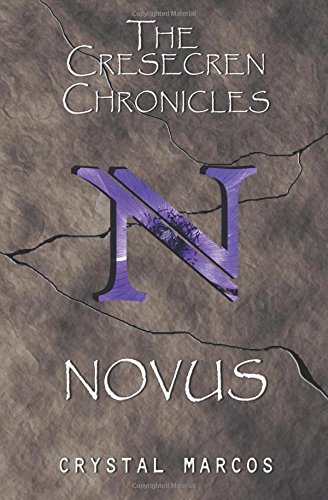 Novus by Crystal Marcos is the first book in The Cresecren Chronicles, an action/adventure, dystopian/apocalyptic romance of an inhuman sort. This is a series and after finishing the first book, I can hardly wait for the next.

I was drawn to Cayden’s story from the opening chapter. He is a Cresecren, created to be used in whatever manner his human’s see fit, a slave. When Cayden has served his usefulness, he is sent to Gavaron, with other Cresecren considered rejects and rebels.

He immediately hooked up with Alecander, even though they do not have friends, sex or mates…like humans.They are infertile. Is that considered a curse or a blessing? So what did he feel for Linnaya?

When we do get to Novus, a charming town – “A place to start over, a place to begin, a clean state…” – Just when I thought they were safe, this mismatched band of friends will be put to the test.

I became complacent, lulled into a sense of comfort by Crystal Marcos’s writing. Things are not what they appear to be and there is imminent danger of a different kind.

I felt happy in those moments when the characters could celebrate and enjoy life, and deep sorrow when tragedy struck.

The descriptive writing led me to visualize the action and the world that surrounds the characters. Example: Every once in a while her copper sandals would peek out as if to say hello. How great is that?

Novus made me think of our Civil War, but with a twist. The “people” just want to be free, human and Cresecren alike. The characters have become a family, of sorts, and I am totally invested in their survival. I marveled at their willingness to put their life on the line for each other as they began to realize their feelings and the ability to care. The Cresecren are not just robots, with no feelings and desires of their own. They had more in common with humans than anyone thought…or is that what put them in so much danger, hunted down like criminals or terrorists.

I love Novus and I look forward to more Cresecren adventures with Cayden, Linnaya and the family, as they struggle to make a free life and stay alive.

I received a copy of Novus by Crystal Marcos in return for an honest and unbiased review.

Being a teenager is hard enough. And what if your life’s path is predetermined? On top of that, you aren’t even Human?

Cayden was given life as a Cresecren. He expected to live out his days with the dysfunctional Human family he was assigned to serve. One fateful night, however, landed him in Gavaron, the home of maimed, elderly, or defiant Cresecren.

Beyond its borders is the Den, an area much more dangerous than he ever imagined. Now seventeen, Cayden unwittingly becomes involved in a conspiracy and is one of a handful of survivors fleeing a deadly attack. They set off on a perilous journey in search of refuge and the truth. Along the way, Cayden begins to comprehend the difference between fully living and merely surviving, while trying to balance his emotions and a forbidden love.

5 Stars -I would recommend not starting Novus (The Cresecren Chronicles, Book 1) by Crystal Marcos if you have anything planned for the rest of the day, as you will most likely not want to put the book down! . . . It’s the kind of book whose characters you miss when you finish the book. -Readers’ Favorite

Award-winning author Crystal Marcos has been a storyteller her entire life. As the oldest of five children, she had to do a lot of entertaining. She lives on the Kitsap Peninsula in Washington State with her husband and daughter Kaylee, with another child on the way. Crystal is the author of BELLYACHE: A Delicious Tale and HEADACHE: The Hair-Raising Sequel to BELLYACHE. Novus, her third book and first Young Adult novel, is Book One of The Cresecren Chronicles.

My review for – A delicious tale – Bellyache by Crystal Marcos