Early Review! What Are You Afraid Of? (The Agency #2) Alexandra Ivy! 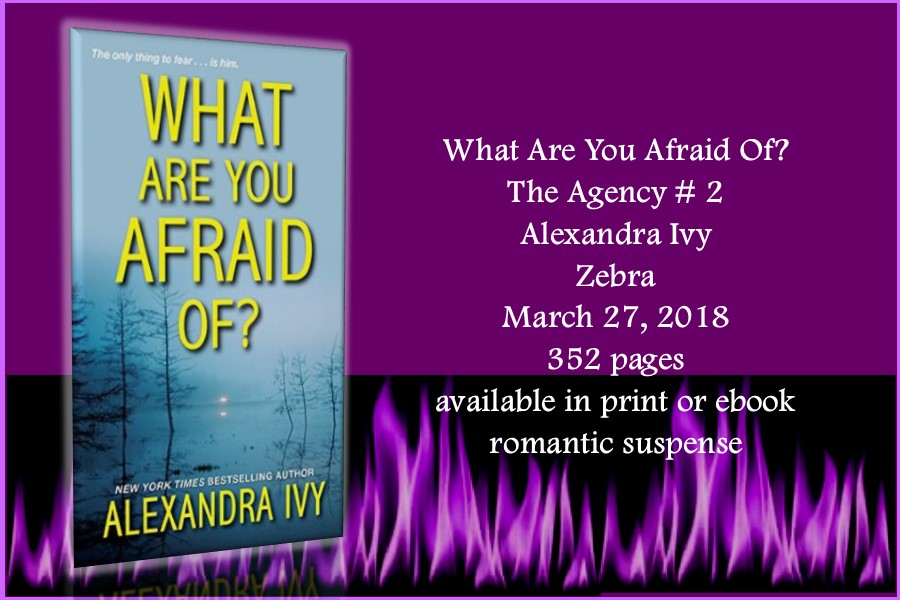 SHE’S LEARNED ALL ABOUT KILLERS
They aren’t the kind of women anyone misses. Truck-stop hookers, runaways . . . no one would even notice they’d disappeared if the killer didn’t photograph their lifeless bodies, posed in the back of a
semi-trailer. Exactly like the infamous Trucker murders. But this isn’t just a copycat. It’s a vendetta.

NOW HE’LL TEACH HER
Carmen Jacobs interviewed the world’s most terrifying serial killers for her bestselling book, The Heart of a Predator. The police might not believe her, but she knows there’s a monster out there, paying homage to other murderers. The only person who can predict where he’ll strike next is Griffin Archer—a reclusive software millionaire with ample reason not to help her.

HOW TO DIE . . .
Carmen has charmed her way past Griffin’s defenses before. He didn’t intend to let it happen again. But with a psycho sending her trophies of his kills, he has no choice but to get involved. The clues point to a killer obsessed with Carmen—someone who knows her work, her past, her secrets. Someone who won’t be satisfied until he has made all her deepest fears come true . . .

Alexandra Ivy has done it again! The Agency’s second book is a spine chilling suspense that will holding your breath in anticipation.

Griffin and Carmen are two very strong characters that easily draw readers into their story and are easily related to. Their relationship starts off on a slippery slope but grows stronger and hotter as they fight for their lives, and the story is full of emotional turbulence which holds readers tightly in their grip.  Carmen faces some hard truths and she discovers just what learning about killers has done to her life as comes face to face with disbelief, mistrust the one man who has ample reason to dislike her.

The fast paced plot keeps suspense and anticipation building throughout the story keeping chills rocking reader’s spines as the killer plaques the couple with doubts and fears by ensuring that Carmen knows that he understands her and knows all her secrets. Readers find themselves glued to the pages to find out what happens next as surprising twists keeps everyone on their toes.

Alexandra Ivy always produces well thought and defined out plots that keep readers guessing and holds them captive throughout each story and the characters are always life like and well developed. What Are You Afraid Of? is another exhilarating example of her romantic suspense stories, it held be captivated from the first chapter until the very end and even had me wondering what I was afraid of? I am certainly looking forward to the next book by Alexandra Ivy.

What Are You Afraid Of? is the 2nd book in The Agency series.

Alexandra Ivy can be found at: