David battled demons for centuries in endless wars. Now a new enemy had cast his shadow on the face of the Earth. Its name was Mathias, who had long ago abandoned his rank among The Powers and fallen from grace. Thirty years ago, David emerged in mortal time on Earth, his soul born as a human named David Giovanni. His new mission was to protect the Archangel Michael's own daughter, who also had come to Earth born in human form as Zoe Montgomery. Specifically, David's orders were to protect Zoe from Mathias. So begins the page-turning mystery and miraculous adventures of Zoe Montgomery - initially unaware of her paranormal past and her soon-to-be life or death future. As she learns who she really is, and takes her place among the warrior class of spiritual beings, heaven and earth lie in the balance. "A must read for all warrior angel aficionados!" Robert Gelinas Author of The Mustard Seed

The first novel in the Zoe Montgomery series is a fantastic paranormal read of good vs. evil.

Mathias lost his grace and fallen from The Powers long ago and now he has cast his shadow on the face of the earth.  David has battled demons for centuries, but now he has been reborn in mortal time on earth with a new mission to protect the Archangel’s Michael’s own daughter who has also been reborn, but she has no idea of who she really is.  Zoe has always used her gift to help find lost children, now her gifts seem to be evolving and as Mathias unleashes his evil, Zoe learns that she must take her place among the warrior class of spiritual beings.

This steady to fast paced plot blends the spiritual with fantasy and paranormal and even with modern technology that intrigue and entertains the reader from beginning to end.  The author describes every scene with vivid imagery and intense detail that brings the story to life and the strong compelling characters are easily related to and grab the reader’s attention.

The romance between Zoe and David is one of true soul mates and brings smiles to the face of the readers during the action and chaos of the story.  The author conveys the emotions and passions of the characters making it easy to understand where each and every one is coming from and what their motivations are.

The author has created a wonderful paranormal world that captures the imagination and takes the battle between good and evil to whole new levels and introduces a whole new world of possibilities.  The author did a great job of blending psychic abilities and supercomputers for Zoe that adds even more spice and depth to the story.

I thoroughly enjoyed this mesmerizing tale of angels and faith in good overcoming evil. I thought it was a little slow in places, but overall I it was a very good read and I am looking forward to reading Zoe’s next adventure. 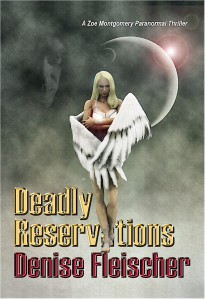 Next book in the Zoe Montgomery’s series

The Sharp Edge of Truth

Denise Fleischer is a time travel/paranormal/SF author. Her first two novels are "The Guardian," and "Altar of Freedom." "Deadly Reservations" focuses on the daughter of Archangel Michael who is born as a human to entrap a fallen angel who came to Earth. Seems he's a powerful businessman with a long-term agenda. Rather than destroy the Earth, he is buying small town America and taking control. Zoe, who is considered a psychic, but she's so much more. Detective David Giovanni and Zoe work with special agent Brian Novelli in attempting to stop Mathias, who is the fallen angel posing as a businessman.

Fleischer is the lifestyle editor of the Journal & Topics Newspapers in the Northwest suburbs of Chicago. She interviews people 6 to 100+ and prepares the copy for most of the newspaper's special sections.

For 4 years she hosted a Second Life virtual world live talk show. She is now writing and editing a virtual magazine and writing her next Zoe Montgomery novel.

Her blog is gottawritenetwork.wordpress.com. GWN was a literary magazine for 36 issues and then a website before transitioning into a blog.