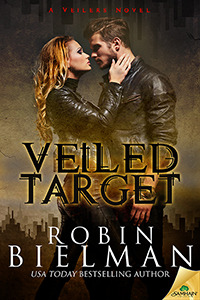 Never take Fate along on a date. The kiss goodnight could be deadly.

Tracking down Veilers—non humans—is only a sideline for Tess Damon. Vengeance for her fiancé’s murder is her reason for living. But with two botched jobs on her record, if she fails to eliminate her next mark, she’s dead. She’s not afraid to die, but not before she gets even. Too bad fate has a really bad sense of humor.

Hugh Langston, a wolfen half shifter, lives to keep both humans and his pack safe. But when rogue humans kidnap his apprentice, his rescue mission is compromised by a hot-as-hell, kick-ass woman who makes him think only one thing: mine.

Tess tries to ignore her feelings, but temptation trips her up. Especially when Hugh figures out he’s her next target and forces her into an inconvenient alliance that tests all the laws against their attraction. Now, with the line between good and evil getting blurrier by the minute, it becomes clear Tess’s only hope of living to see another day—and finding a murderer—lies with the one man she’s supposed to kill.

Warning: Contains one obscenely hot alpha and the woman who wants to love him before she kills him. Look out for a blind date, scorching sex, humor, lies, and untamable attraction.

The first book in the Veilers series is a riveting paranormal read with a refreshing different twist.  The author has created an intriguing world with some fascinating elements and captivating characters which has the potential for some great future stories.  I was caught up in the story from the very beginning and the author surprised me with some twists that I didn’t see coming, although I am a little disappointed in their code names they don’t really fit and also with Tess’ employment situation at the end, I know what she said but how did that come about? Did they just let her go? Or is that information to be revealed at a later time? Hmmm… guess I will just have to read more in the series to find out huh?

I’m surrounded by boys ~ my hubby (and high school sweetheart), two kids, and the cutest mini Labradoodle in existence. (The hubby and kids are pretty cute too.) I’m a Southern California girl and there’s no place I’d rather be than the beach. However, I long to go on adventures and there are many places that I really want to visit – Paris, Ireland, Costa Rica, Yellowstone National Park,  Italy, London, and so many more. I wouldn’t mind indulging my sweet tooth along the way either! I have a major crush on  two fictional characters: Harry Dresden from Jim Butcher’s Dresden Files books, and Remy Chandler from Thomas Sniegoski’s Remy Chandler novels. When I’m not writing, I’ve usually got my nose in a book. I love to be outdoors, and I also run a few times a week on my treadmill while watching my favorite TV shows. I drive too fast, love Post-it notes and cafe mochas, and if every day were Cupcake Day, I’d be a happy camper! Oh, and I love dumb blonde jokes. I’m a USA Today Bestselling Author of contemporary and paranormal romance.

Writing is a dream come true and I still pinch myself to be sure it’s real. I love connecting with readers!