Review: The Silver Pear (The Dark Forest #2) by Michelle Diener 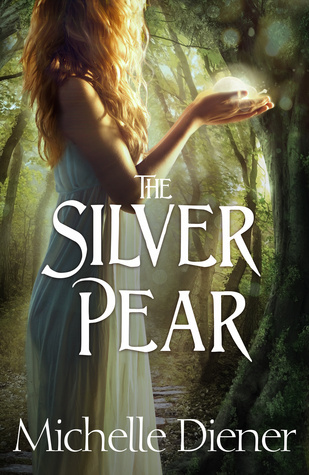 Kayla is determined to master her new-found abilities as a wild magic witch. She's learning everything she can so she and her betrothed, Rane, can put a stop to the sorcerers who are recklessly gathering their power, building up their magic to take each other on in a war that will destroy the countries of Middleland.

An even more unlikely sorcerer . . .

Mirabelle's father was one of the greatest sorcerers in Middleland, but when he used the magic in the silver pear to bespell his pregnant wife to give birth to the greatest sorcerer who would ever live, he never thought that child would be a girl. Mirabelle is nothing like a usual sorcerer, confounding every expectation, and when she comes to the rescue of Rane's brother, Soren, she makes a decision few sorcerers would. She saves him, rather than herself, losing the silver pear in the process.

With war not just a possibility but simply a matter of time, there are no neutral parties and no fence-sitters in Kayla and Mirabelle's new world. Everyone is either an ally or an enemy and there is a price to pay for everything. The question is, how high will it be?

Kayla is an unlikely princess and Mirabelle is an unlikely sorcerer but together they will make a formidable team against the dark sorcerers but they will need Rane and Soren if they hope to stay alive for magic always exacts a price in this thrilling fantasy romance.

This steady to fast paced plot keeps readers on their toes as the captivating characters’ paths takes some twists and turns on the way to save their world. Kayla and Rane’s path have them locking horns with sorcerers while they are searching for Soren and Soren’s path has lead him straight into the arms of Mirabelle and together their path has them going up against sorcerers as well. The dark sorcerers’ deadly battle with each other has set their path on a greedy grab for magic and power. The well orchestrated paths are full of suspense and excitement ensuring that the reader never gets bored and that they are completely caught up in the story but they do have to pay attention are they will find themselves a little lost along the way.

The well written scenes and details easily capture the imagination and bring the story to life as the characters forge their way through treachery and betrayal to fight for their people and for each other. There is plenty of romance as Mirabelle and Soren finds themselves attracted to each other and of course Kayla and Rane’s attraction is still going strong, but retrieving the golden apple and the silver pear and stopping the destruction takes up a lot of their time.

Michelle Diener’s fascinating world of magic and magical creatures enthralls the reader with lots of suspense and adventure with some romance as well and there was no way I could put this story down once I began reading it. The Silver Pear can be read without reading The Golden Apple first, especially with the helpful refresher in the beginning of this book but I recommend reading them in order to get the complete magical experience. 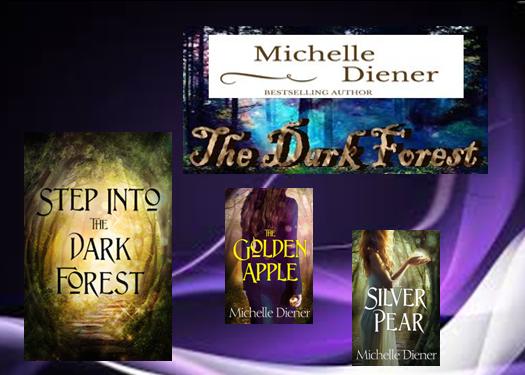 One of the recurring themes of fairy tales is the dark forest. The symbolism of entering the dark forest is one of confronting the darkness of our own sub-conscious, and grappling with issues of identity and rebirth. Respected Jungian psychologist, Marie-Louise Von Franz, who was a leader in work on the interpretation of fairy tales, discusses how entering the forest is the starting point for the hero or heroine’s life-changing deeds and decisions. Where they go from being unconscious of themselves and their abilities, to a more conscious state. I loved weaving that fairy tale aspect into The Golden Apple, even though it wasn’t part of The Princess on the Glass Hill, the original tale I based the story on.

A criticism of fairy tales is the passivity of heroines. Cinderella has to be found by the prince and saved, Snow White kissed awake while she lies passive, Sleeping Beauty, the same. But there are fairy tales were the heroine is more active. East of the Sun, West of the Moon, which I based my fantasy novel Mistress of the Wind on, is one of them, and in that, the heroine is clearly the hero and the protagonist of the story. But there was also a flash of that in The Princess on the Glass Hill, and why I became interested in the story in the first place.

At first glance, the story is like Cinderella, Snow White etc, in that the princess can do nothing but sit on top of her glass mountain and wait while the knights try to ride up the smooth, steep glass to pluck the golden apple from her lap. She will have no choice but to marry whoever manages to do it. But there was a line in the story which caught my eye. It said the princess threw down the apple to the hero as he tried to reach the top. In other words, she had sized them all up, decided who she’d prefer to have, and helped the hero to win. She seems to have no power, but in fact, she has all of it, in that moment. She has the golden apple. She can throw it to whoever she wants, or, in fact, hold on to it. No-one can reach it without her assistance.

This interesting twist on power, who wields it and how it is used, inspired me to write The Golden Apple. I ended up diverging wildly from the original tale, but at it’s heart, I hope I reflect that interesting power-switch that the original was hinting at.

Michelle Diener writes historical fiction and fantasy. Her Susanna Horenbout & John Parker series, set in the court of Henry VIII, includes In a Treacherous Court, Keeper of the King’s Secrets and In Defense of the Queen.

Michelle’s first fantasy novel, Mistress of the Wind, was published on December 19th, 2013 and her second fantasy, The Golden Apple, is due out on March 24th, 2014.

Michelle was born in London, grew up in South Africa and currently lives in Australia with her husband and two children.