When Jenny O'Keirna gets a chance to slip her older brother, the new king of Hansarda's, leash, she jumps at it, even if it means playing babysitter to a too-smart-for-his-own-good inventor. She's not expecting the attraction that sparks between them—or that Sanctify is just as desperate to take him for their own.

Never in Mac Flannery's wildest dreams did he imagine Jenny would be the one sent for him. He sees beyond the mad grin the sexy princess of Hansarda presents to the world, and that combination of vulnerability and wicked humor is a siren call he can't resist.

But Sanctify is always three steps ahead of them. On the run—and unable to keep their hands off each other—Jenny and Mac devise an insane plan: kidnap the leader of Sanctify, and stop this war once and for all. Unfortunately, they've just played right into his hands…

This sci-fi romance takes the reader on a thrilling adventure through the galaxy.  Jenny O’Keirna is tasked with babysitting a to-smart-for-his-own-good inventor, Mac Flannery, which she thought it would be an easy task.  But she wasn’t expecting the attraction that sparks between them – or that Sanctify wants him too.

This fast paced and smooth flowing plot keeps readers on the edge of their seat with lots of action, suspense, drama and romance.  The author brings the story to life with well written scenes and details that capture the imagination which makes the reader feel as if they are on the adventure too.  The well orchestrated action scenes are exciting and believable and the strong compelling characters are easily related to and grab the reader’s attention from the very beginning.

The attraction between Mac and Jenny is red hot and pulses from every page and the sex scenes are hot and steamy, but it’s the relationship that has stars exploding across the galaxy.  Danger at every turn, betrayals and enemies around every corner is enough of a hindrance, but Jenny isn’t one to let down her guard and let anyone in due to her past.  The romance between the two captures the reader’s interest because it seems that they are opposites that couldn’t be compatible at all. There is a lot snarky and feisty dialogue between friends and friendly enemies that provides lots of laughs and entertainment.

The author provides a world full of action packed thrills, lots of captivating characters, sensual and passionate romance and keeps readers on their toes with lots of twists and turns.  I enjoyed the first book in the series, but I like this one even better and I can’t wait to read the next one. 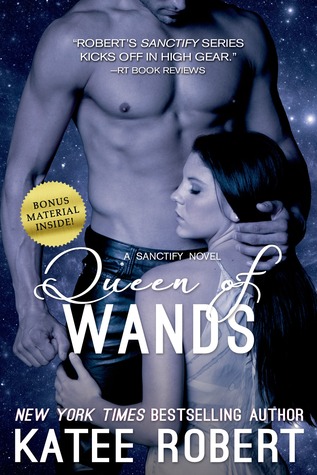 Katee Robert learned to tell stories at her grandpa's knee. Her favorites then were the rather epic adventures of The Three Bears, but at age twelve she discovered romance novels and never looked back.

Though she dabbled in writing, life got in the way--as it often does--and she spent a few years traveling, living in both Philadelphia and Germany. In between traveling and raising her two wee ones, she had the crazy idea that she'd like to write a book and try to get published.

Her first novel was an epic fantasy that, God willing, will never see the light of day. From there, she dabbled in YA and horror, before finally finding speculative romance. Because, really, who wouldn't want to write entire books about the smoking-hot relationships between two people?

She now spends her time--when not lost in Far Reach worlds--playing imaginary games with her wee ones, writing, ogling men, and planning for the inevitable zombie apocalypse.