Review for The Body in the Birches by Katherine Hall Page

The Body in the Birches: A Faith Fairchild Mystery 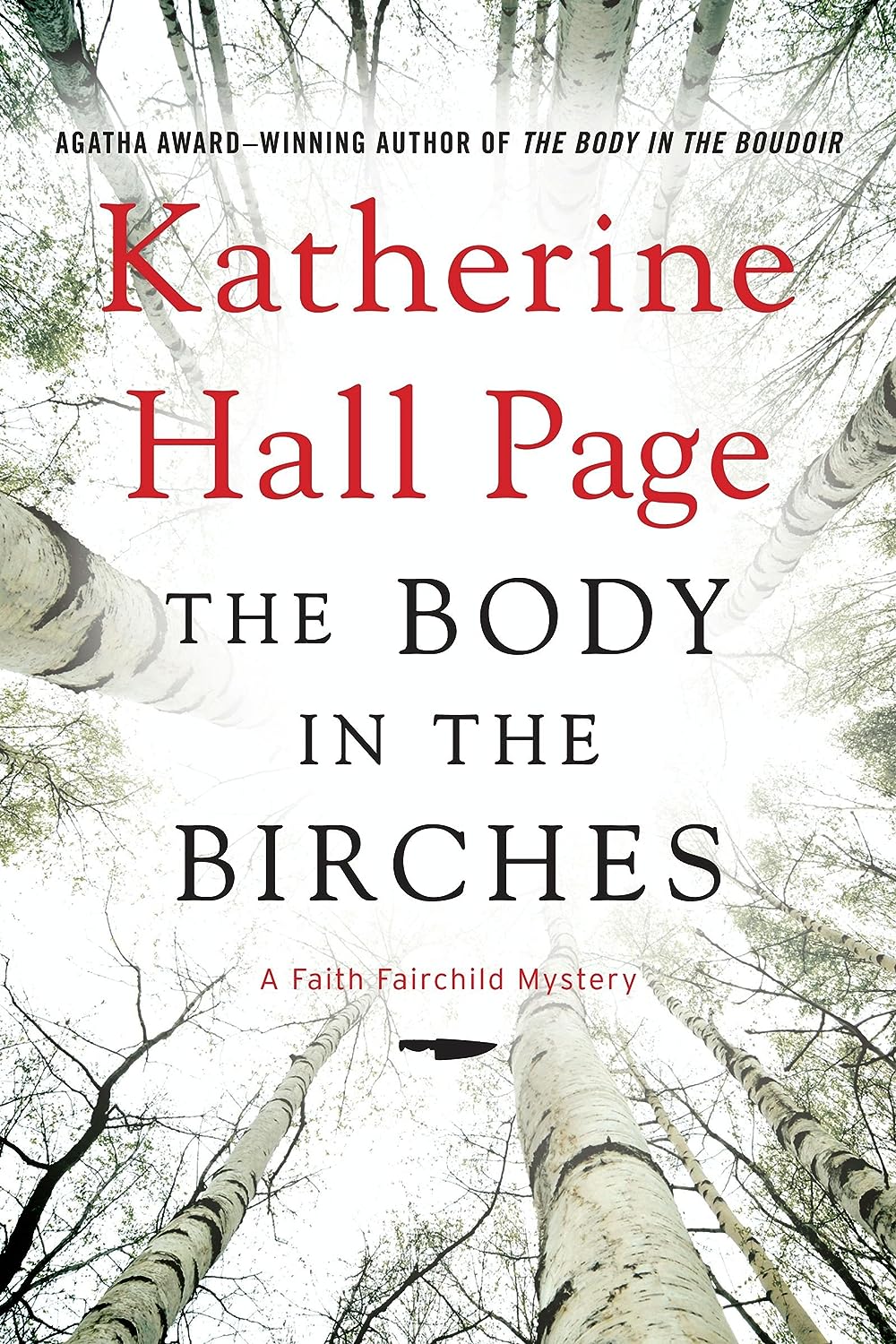 Just looking at the cover, I knew I would have to read this book. I love trees and an island…in Maine…makes me think of Cape Cod. Too close to home to miss.

Katherine Hall Page is a prolific writer, with many “body” books. How have I not heard of her before?

The Birches on Sanpere Island had been handed down through the generations.This also makes me think of Cape Cod, where cottages are passed down. There are so many things that remind me of the Cape, that I felt right at home. Like the boat parade and the Fourth of July celebrations. Out on the water, I too would be bundled up as if it is winter. The mornings can start out chilly, so layering is a wise move. Katherine draws such vivid pictures with her words, I am able to see as if I am there.

pic of shelby as french fry

Sophie’s Aunt Priscilla, the owner of The Birches, is dead and Sophie’s mom had sent her there to find out who would inherit The Birches?

The family descends on The Birches like a flock of vultures, as the neighbors watch. The population is uder 3,000, so everyone knows everyone’s business. I think this will get very ugly. Will it read as true crime? We will see.

It doesn’t take long fo the sniping, sucking up and maneuvering begins. It is at times like these that you find out what people are made of. It brings out the best and worst of the characters. They run the gamut, from lawyers to hippies to snobs and yuppies. Some of the characters are loving and giving, helping out because it’s needed and they can. Others spend their time ordering people around like servants and insinuating themselves into conversations and situations without being invited. They are aggressive, selfish, narcissists.

Sophie is a lawyer and a hopeless romantic. Kendall is a lawyer too. The immediate attraction is a recipe for romance, don’t you think? I love that they eat out everywhere, from five star restaurants to the local dive.

Faith and Tom are staying at the Pines while there house is being renovated. Tom is a minister and Faith was raised in the lifestyle, though it seems now dead bodies seek her out.

I know Faith is the crime investigator and the series is names after her, but Sophie was the one who became most important to me.

Faith and Sophie – I feel something special will come of their meeting.

A predictable story, but very character driven for you people lovers out there. A glimpse into the characters lives, from the innocent children to the conniving and greedy adults. There are so many suspects, though one stands out.

Secrets can get you killed. Vermin can lurk right under your nose, justifying their actions, feeling a sense of entitlement, with no remorse. Actions tell a lot about a person.

A wonderful summer mystery, so be sure to add it to your reading list.

I received this book in return for an honest review.

Faith Sibley Fairchild, Katherine Hall Page’s amateur sleuth/caterer is back on Sanpere Island in Penobscot Bay, Maine. The Fourth of July is one of the hottest on record and things heat up further when, after the fireworks, Faith discovers a body in the woods at The Birches, an early 20th century “cottage.” The body turns out to be that of The Birches’s housekeeper, and the death appears to be a simple but tragic heart attack. What is not simple is what’s going on at The Birches: a family gathering called to decide who will inherit the much loved, and valuable, place that has been in the Proctor family for generations. Meanwhile teen Ben Fairchild is learning things at his job at The Laughing Gull Lodge far removed from the dishwasher job description and his younger sister Amy’s new friend, Daisy Proctor, is frightened–she is convinced someone is trying to eliminate her mother from the competition for The Birches for good. Katherine Hall Page is the author of twenty-two previous Faith Fairchild mysteries, the first of which received the Agatha Award for best first mystery. The Body in the Snowdrift was honored with the Agatha Award for best novel of 2006. Page also won an Agatha for her short story “The Would-Be Widower.” In addition, she has been nominated for the Edgar Award, the Mary Higgins Clark Award, and the Macavity Award. She lives in Massachusetts and Maine with her husband.