Vincent has always known his fathers’ secret: they are both vampires, escaped from a fighting camp where they were forced to combat the demons that come to Earth from another dimension through a portal.

He’s also known he was special, brought into the world by his mother’s magic at the cost of her life. It gives him the strength, speed and acute senses of vampires without their weaknesses, a combination unheard of.

And he’s known that both facts were to be kept secret at all cost, lest his fathers be sent back to fight an endless battle, or he be studied like a lab rat for the rest of his life.

So, during his junior year in high school Junior, when he receives an anonymous text message that hints someone knows, he’s determined to figure out who it is and how to keep them quiet before his fathers find out and decide they should all run and hide. This task, however, might be easier if his best friend didn’t suddenly show a deep interest in vampires, demons and fighting camps… and if the girl he has a crush on didn’t distract him so much…

Secrets have a way of coming out as a teenage boy finds out in this mesmerizing tale.  Vincent has always kept the secrets of his family, he knew he had to in order to keep them safe, but he’s also curious about his mother and the things that his fathers won’t talk about.

This steady paced and smooth flowing plot keeps readers intrigued throughout with a fascinating world, captivating characters and drama and suspense.  The author describes the scenes with well written details that capture the imagination and arouses the curiosity.  The strong compelling characters are easily understood and grab the reader’s attention from the very beginning and tensions building throughout the story regarding Vincent’s secret.

Vincent has a crush on a young girl at school and after a fight with his best friend he comes to the conclusion that she is the one who knows his secret, which sets a series of events in motion that could prove disastrous for Vincent and his dads, so when his questions and investigating actually do lead to the unthinkable, his dad’s becoming imprisoned again, he does whatever it takes to get them back.

The story is fascinating and takes place in an intriguing world, and it combines typical teenage boy drama with what that teenage boy would have to go through to keep major secrets not only about his fathers, but also about his self.  This of course creates lots of drama and emotional turmoil for the young man.  The reader can’t help but get further drawn into the story with every little tidbit revealed about his fathers’ life and empathize with Vincent and how he deals with the burden. I enjoyed the story, even though it’s not really my type of book because it is more of a drama with paranormal elements than a kick ass paranormal or paranormal romance. 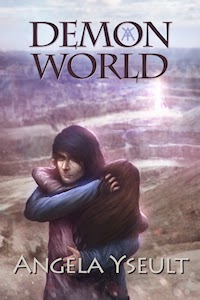 Being a teenager can be complicated.

Being a teenager when you happen to be a Shifter, when the universe is your playground, when you live with vampires or your world is under siege by demons is even more complicated.

Or at least, that’s what Angela’s characters tell her; her own teenage years were fairly uneventful… and still, rather complicated at times, too.

She grew up in France, the quiet, bookish, geeky older sister to an athletic younger brother, and started at fourteen to put down on paper the stories that were playing in her head. Her first story was a sci-fi short set in space... and was probably sufficiently inspired by Star Wars to trigger a lawsuit!

Her next effort was a longer, also sci-fi story that earned her the first place in a novella contest in her high school. Her parents' stunned expressions upon receiving an invitation to attend the prize ceremony were interesting...although really, what did they think she was doing, typing on her electronic typewriter for hours every night?

Switching to writing in English was a process, and for a time Angela focused on more adult stories, but her first loves have called her back for too long to ignore them any longer...