Release Day Review: 'Til Dragons Do Us Part (Never Deal with Dragons #3) by Lorenda Christensen 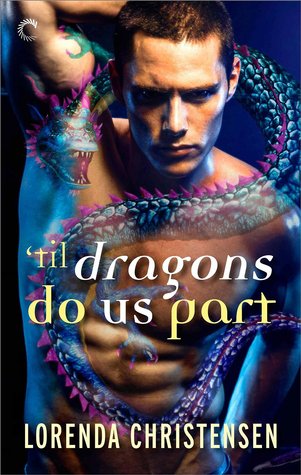 Savannah Cavenaugh became a top art thief thanks to a secret ability—a dragonmorph, she can literally fly away from the scene of the crime. Next up: stealing a priceless painting out from under the snout of Lord Relobu, North America’s fearsome dragon ruler. True, she’s never had to work in the midst of Earth’s most polarizing wedding before. Keeping her true identity hidden will demand she get creative, to say the least.

Cameron Shaw has one last chance to prove himself. As Lord Relobu’s interim head of security, he needs to ensure the world’s very first interspecies wedding happens without a hitch. That means keeping an extra close eye on the wedding planner’s pretty young assistant. She’s adorable, but something’s not quite right…

Fumbling her way around bouquets and linens turns out to be the least of Savannah’s problems. Crushing on Relobu’s hottest human henchman was not part of the plan, and neither was revealing her—achem—ferocious side. But when her archrival shows up to nab the very same painting she’s after, all bets are off…

Savannah Cavenaugh became a top art thief because of ability to literally fly away. Crushing on the security chief of her next job was not in her plans and certainly not revealing her more ferocious side and now she’s rethinking her plans until her archrival arrives to nab the same object…then all bets are off in this charming paranormal fantasy romance.

The fast paced and smooth flowing plot charms readers with suspense, action, fun and romance. The author brings the story to life with well written scenes and details that capture the imagination and the strong captivating characters and well orchestrated suspense draw the reader deeper into the story while the fascinating world ensures that the readers want to know everything.

The attraction Savannah feels for Cameron is inconvenient to say the least even if it is the hottest she’s ever felt for anyone and Cameron’s job puts him at odds with the lovely Savannah but his desire for her only gets hotter. The reader can’t help but get caught up in the fascinating dynamics of their courtship as they try work things out, especially with the multitude of secrets that Savannah has which leads to some interesting and sometimes fun situations.

There is lots of fun and excitement to be had as the story provides plenty of chuckles and spine tingling excitement from Savannah’s jobs, escalating danger from the people opposing the wedding of the century and Savannah’s archrival. The alternate world the author created provides readers with dragons and romance with some interesting and different elements and I for one love visiting the enthralling characters, so I couldn’t put this one down until I had read every last word (and I just want to add that this conclusion was just kind of perfect for Savannah and Cameron) and I can’t wait to read the next one. 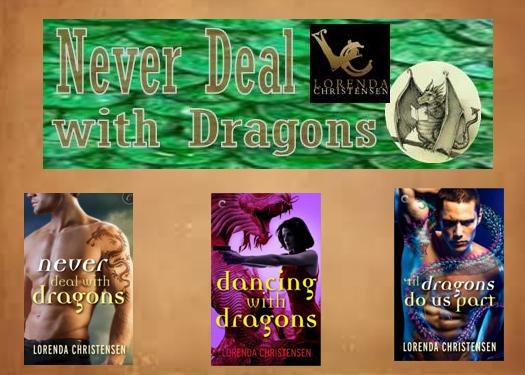 You can see my review of Never Deal with Dragons at:

You can see my review of Dancing with Dragons at:

Lorenda lives with a husband and two sons in a house that feels far too small during the stay-inside winter months. Lorenda loves chocolate, hates snakes, and despite living two years in Bangalore next door to a native preparer of India cuisine, cannot cook anything but ground beef.