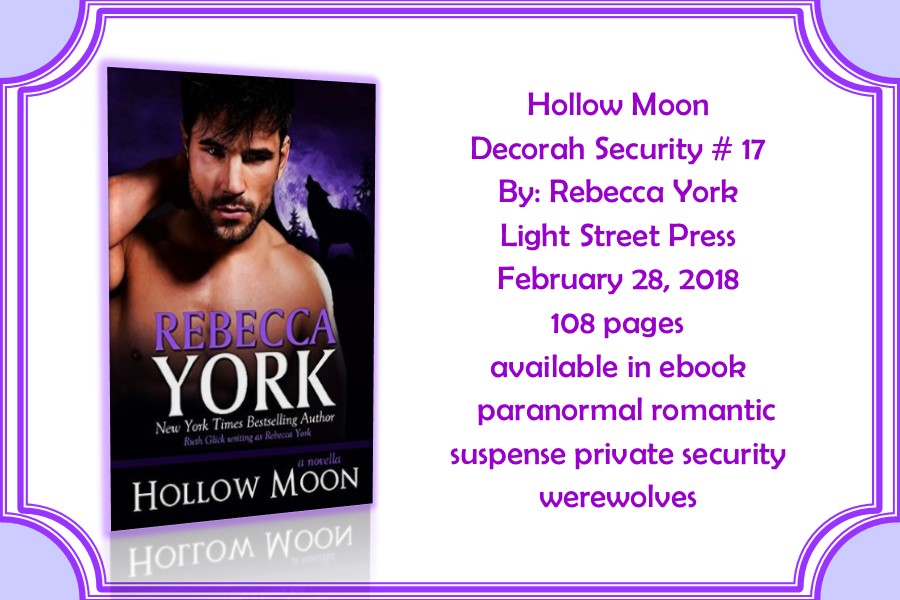 Did she save his life only to betray him?

Werewolf detective Knox Marshall makes a near-fatal mistake when he tries to get the goods on a drug lab in isolated Western Maryland. Captured and used as a test subject in a diabolical experiment, he manages to escape. After nurse Maggie Leland finds him naked and wounded in the woods, she patches him up; but she’s hardly prepared for the drug flashbacks that spin his mind out of control or the side effects that turn him on. She and Knox get close quickly. He thinks he’s found his lifemate—until it looks like Maggie is working with the drug dealers. When he realizes he’s wrong, is it, too late to save her life?

Hollow Moon is another great read by Rebecca York. The characters are strong, compelling and draw readers into their story and the suspense keeps readers glued to the pages as Knox finds himself getting caught in a situation and struggling with a new relationship in one fell swoop. The story is full of danger and thrills and emotional turbulence that keeps readers glued to the pages.

I love Rebecca York’s romantic suspense books but I really miss her Moon series full of Marshall werewolves so when the Marshalls get involved in Decorah Security investigations, I just have to read them and I am happy to say that Hollow Moon is one such book that I really enjoyed. There was one problem though, I wish it had been longer because I wasn’t ready to leave the Decorah Security world behind, but I live with anticipation of the next one.

Hollow Moon is the 17th book in the Decorah Security series.

Hollow Moon is available in ebook at: