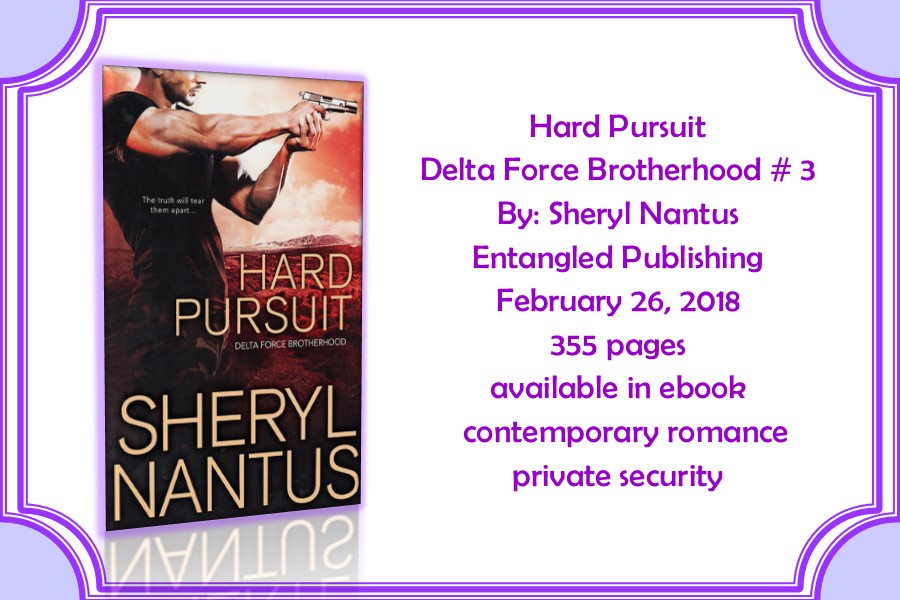 Trey Pierce has spent years helping the Brotherhood, using his computer skills to dig out secrets and help deliver justice. But there's one mission he's yet to finish–– finding out who killed his best friend. A chance meeting with Ally Sheldon gives him a new lead, one that comes with some baggage.

Executive Ally Sheldon has to find her wayward brother if she wants to save her company. Pretending like nothing is wrong is getting to her. But when the sexy Trey is assigned to her to help her case, focusing on what's most important is difficult.

Never in his life has Trey been more attracted to a woman, but she’s hiding something. And that something may just destroy them.

This is the first book that I have read in the Delta Force Brotherhood series so let first let me tell you that it can be read as a standalone and the author does a great job of arousing reader’s curiosity about all the characters in the Brotherhood and the previous books, so be prepared to want to read them all.  The plot is set at a steady pace with lots of suspenseful events that keep readers glued to the pages and caught up in the events as there are a few twists and turns and Trey’s mission to deliver justice complicates things which adds suspense and emotional drama to the story.

The characters are strong and compelling easily drawing readers in and refusing to let go. The attraction between Trey and Ally sizzles with heat and passion but their romance is an emotionally turbulent one as both characters’ lives are complicated and pull them in different directions and there are quite a few emotional and sensitive choices that add to the suspense of whether this couple will have a happily ever after or not.

I have read other books by Sheryl Nantus but they were of the paranormal variety, so when I saw this one I decided to give it a shot and I was not disappointed. The author brings her world to life with well written words that paints vivid images of her world and characters which it makes it easy for the reader to become caught up in their lives and the plot. I have added the first two books in the series to my TBR and I am looking forward to reading more in this series.

Hard Pursuit is the 3rd book in the Delta Force Brotherhood series.

Hard Pursuit is available in ebook at:

Sheryl Nantus can be found at: