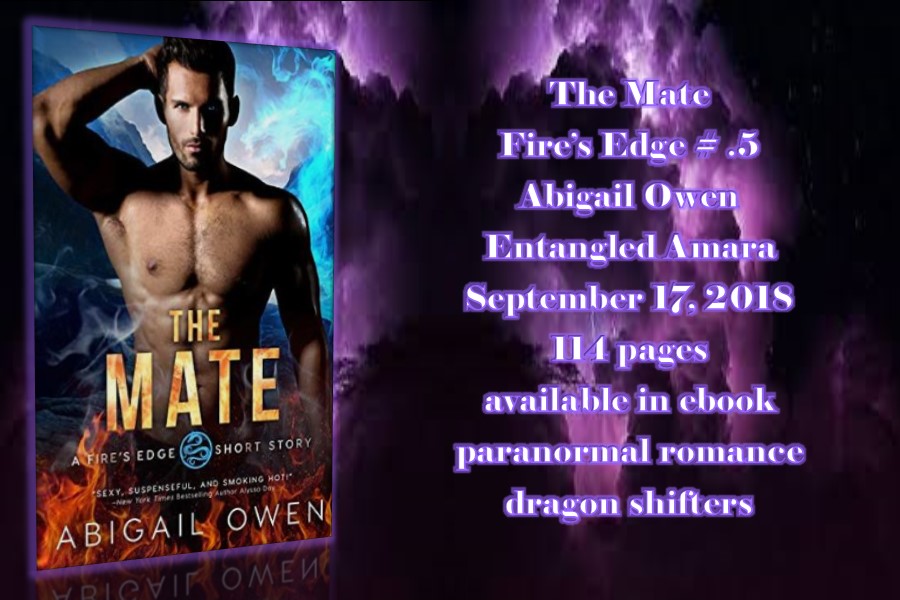 A prequel to the scorching paranormal romance, The Boss, coming September 24th, 2018.

Maddie Thompson’s life just fell down a rabbit hole. Finding out she's a dragon shifter was one thing — she never quite fit into the human world, and this new reality feels… strangely right. However, discovering the next step is to choose a mate, and if she chooses wrong she'll die, is the other side of crazy. Especially when she already left a piece of her heart with someone who didn't want it.

To say dragon enforcer Fallon Conleth was shocked when the Mating Council summoned him as a potential mate for a newly found dragon doesn’t quite cover it. A mate is rare and precious and many dragons never find theirs. Fallon isn’t sure he’s worthy of the honor, not when so many deserve it more. He’ll just go through the motions and return home alone… until he sees Maddie. The human woman he reluctantly let walk away.

Fallon already broke Maddie's heart once, but if he can't convince her that they're meant to be, she'll die... and he won't be far behind.

The Mate is a fantastic introduction to the new Fire’s Edge series by Abigail Owen. Fallon and Maddie are feisty, compelling characters that grab reader’s attention right from the start, the relationship is not an easy one as there are not only does these two have a past that is interfering, but the present and future could have deadly consequences so making a decision to move forward in a mating is suspenseful and unnerving which keeps readers holding their breath in anticipation of what will happen.
Not only the romance holds readers hostage with suspense but another dragon wants Maddie for his own and there is political unrest in the dragon world that could endanger Maddie and Fallon as well. The thrilling fast paced plot keeps readers glued to the pages as they introduced to a fascinating, energetic new world of dragon shifters with some unique elements that make these dragons quite a bit different from others. So while the story may be short, it packs quite a punch and has gotten me very excited about this new series so now I am off to read the first book right now.

Add to your shelves at - AVAILABLE in ebook at - 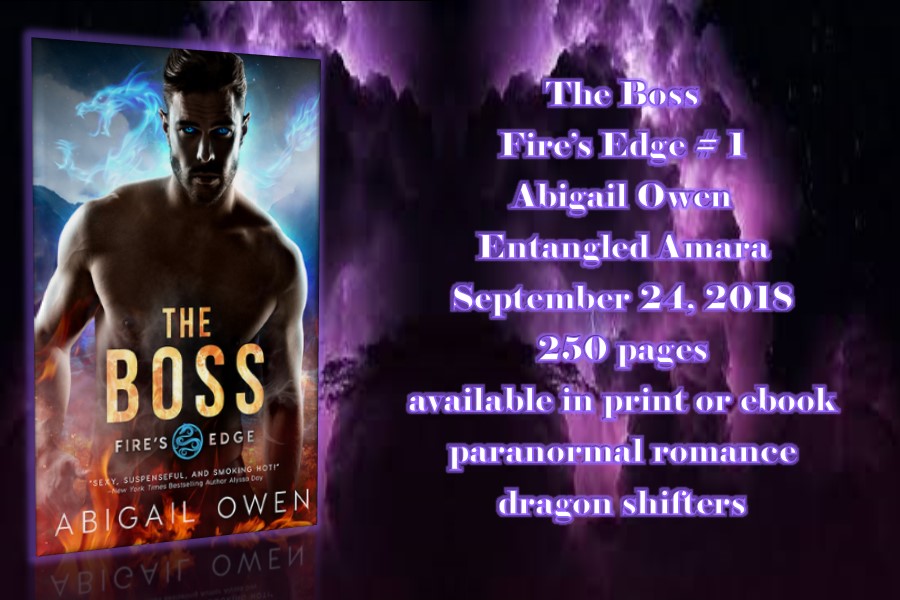 Finn Conleth leads his team of enforcer dragon shifters with an iron fist and a cold heart. Every dragon seeks his destined mate, but the process to turn the woman he once thought was his killed her and devastated him. He will never risk his heart again. His team is his family now. When his body eventually gives out, he’ll leave, living his last days alone.

Delaney Hamilton moved across the country to escape the freak fires that plague her. But when another suspicious fire erupts and rapidly escalates around her, her hopes for a new life go up in smoke. She has no choice but to turn to the mysterious men who come to her aid.

Finn knows the fire is dragon-caused, which puts Delaney’s problems directly in his jurisdiction. No matter how her wounded grey eyes call to every part of him, he refuses to risk her life in the mating process.

Until another dragon threatens to claim Delaney for his own, and Finn has to sacrifice everything to keep her alive...

The Fire’s Edge series is off to a great start, not only was the prequel fantastic but the first book is as well. This bombtastic romance engages readers from the very first page and holds their attention throughout with bold, convincing characters that are easily connected to and their romance is sweet, full of sizzling chemistry and emotional turmoil that is quite different from other issues that couples may face. The decision to risk one’s heart after all is one that readers everywhere can relate Finn’s reasons for his reluctance to act on the sparks burning between him and Delany is an especially traumatic one and really the situation Delany finds herself in would traumatize most, so this couple is one that readers really want to get their happily ever after.

The fast paced and smooth flowing plot keeps readers on the edge of their seat with lots of thrilling suspense, exciting between dragons and nail biting anticipation. The Mate and The Boss take place simultaneously, so the events that take place in the prequel affect the characters in this story, so readers get an overall picture of the political unrest that will upset the dragon world but since this story is longer and gives more detail of this fascinating world and of course readers are introduced more of the dragons that inhabit this world, the readers are better able to understand the world and some of the motivations of the characters. Once again, I was thrilled with the new world that has sexy dragon firefighters and unique mating elements that add danger, spice and tension to matings and makes for a fascinating read, so I am looking forward to reading more books in this series. 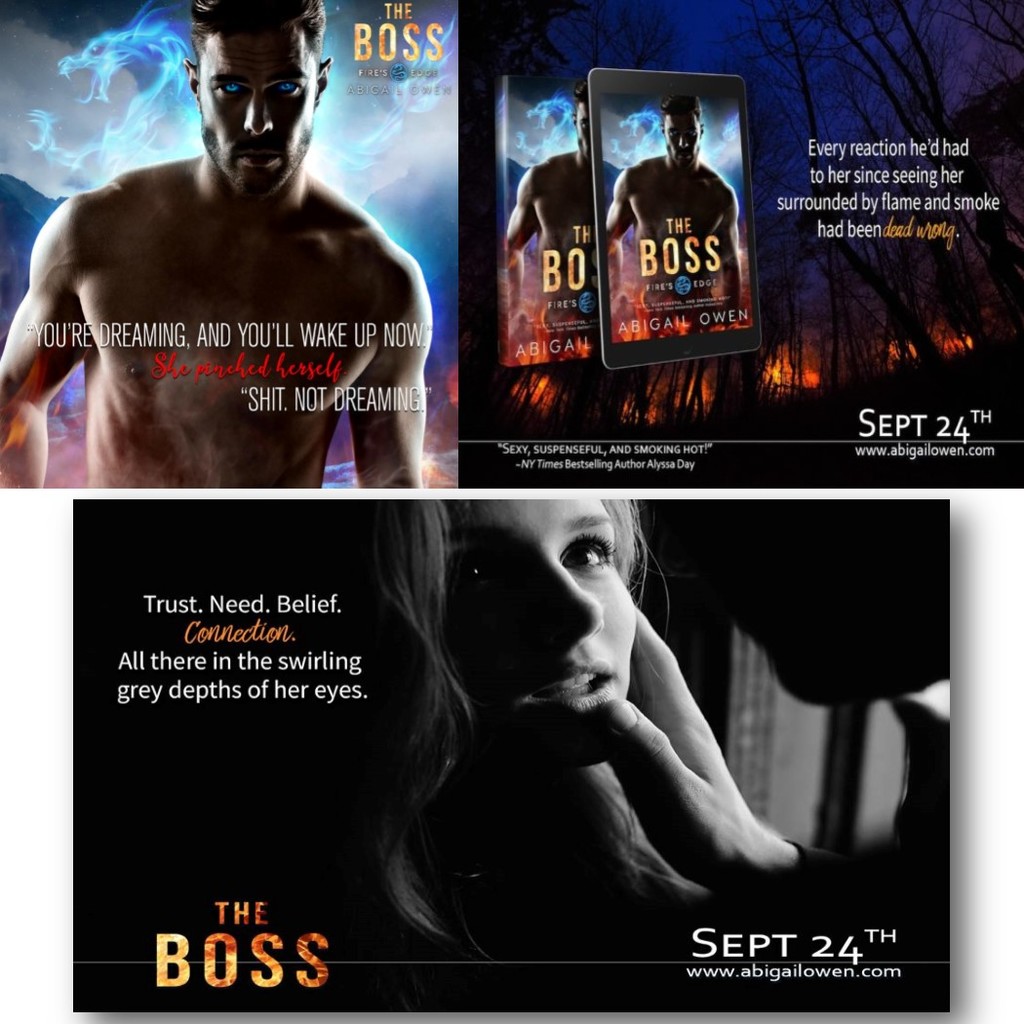 Add to Your shelves - 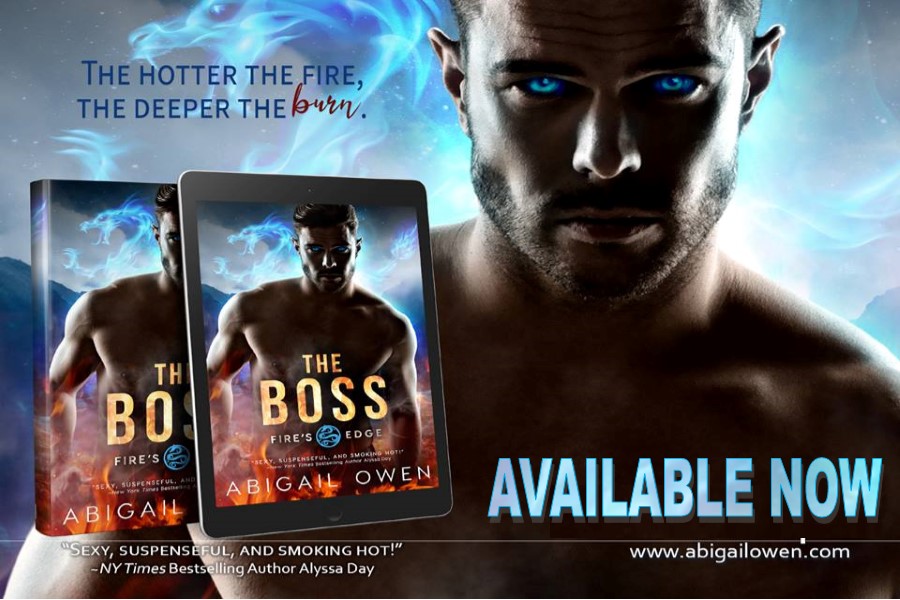 AVAILABLE in print or ebook at -

Fire’s Edge is a new paranormal romance series featuring dragon shifters. This is a 4-book series which will be released alternating with the author's upcoming Inferno Rising series. All 8 books of the 2 series will be tied together by the world, a few characters, and a few story lines. Award-winning paranormal romance author, Abigail Owen, grew up consuming books and exploring the world through her writing. She attempted to find a practical career related to her favorite pastime by earning a degree in English Rhetoric (Technical Writing). However, she swiftly discovered that writing without imagination is not nearly as fun as writing with it.

No matter the genre, she loves to write witty, feisty heroines, sexy heroes who deserve them, and a cast of lovable characters to surround them (and maybe get their own stories). She currently resides in Austin, Texas, with her own personal hero, her husband, and their two children, who are growing up way too fast.

For the latest news and exclusive excerpts, SUBSCRIBE to Abigail’s monthly NEWSLETTER: http://eepurl.com/Lw2XH