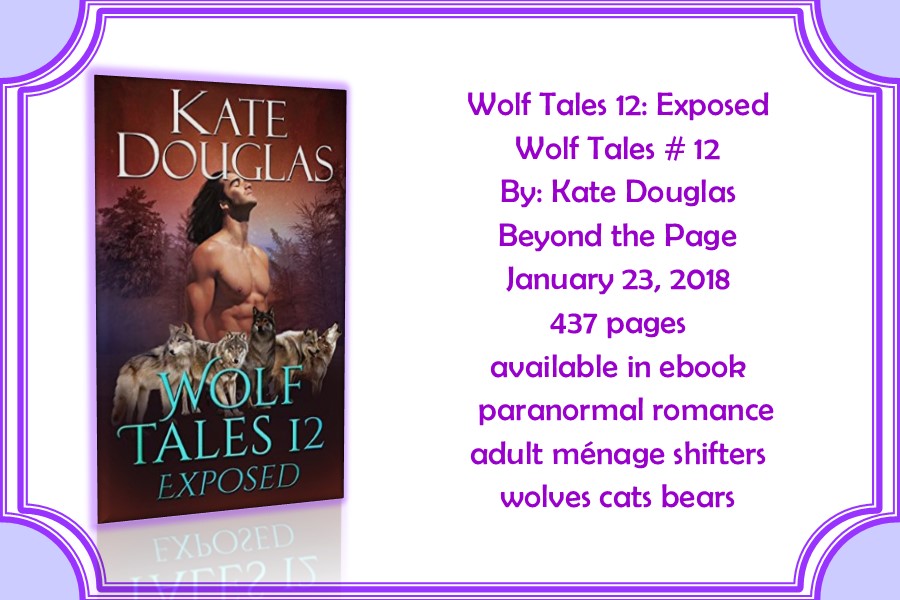 Realizing that the distance between them makes them vulnerable, they answer the silent call for all Chanku to come together at their pack alpha’s home in Montana. And in that setting, as they struggle to understand their new place in the world and defend themselves against suspicious and violent adversaries, they will discover a shocking revelation about their origins and their legacy.

As the pack adapts to these new realities and reclaims their primal past, they will embark on a journey that will take them into uncharted territory and open up a spectacular, unimagined future . . .

What an electrifying end to the Wolf Tales series! Kate Douglas ended the series with one heck of a sendoff, there was lots of surprising twists with lots of adrenaline pumping anticipation and suspense building throughout the story which keeps readers on the edge while the fascinating characters continue to draw readers in.

There was lots of hot and super-hot sex as usual with the sexy Chanku as well as all kinds of emotional turmoil and sweet romance that keeps readers connected to their world. The story was wonderful in that the whole of the Chanku world was involved in the story which, to me, really keeps up the feeling that I have really gotten to know these characters and their world as the series progressed.

The Chanku face some tough circumstances and life-changing events that add lots of excitement to the story as well as making it unpredictable and ensures that readers can’t put the book down because they just have to know every last detail.

I know I couldn’t put the book down once I started reading it and while I hate that the series is ending, I also think that it’s an appropriate time and Kate Douglas did a stupendous job of bringing this era to a close. Of course, I already know that this isn’t the end of the Chanku as Kate Douglas already has several books out in her Spirit Wild series which is the second generation of her fascinating world.

Wolf Tales 12: Exposed is the final book in the Wolf Tales series.

From the Author: The new edition of Wolf Tales 12 is the same story as the original--new cover, typos (hopefully) all caught, and a much lower price.
But the members of the pack are just as hot as they've ever been!

About the Pack     Reading Order     Timeline

Wolf Tales 12: Exposed is available in ebook at:

Kate Douglas can be found at: