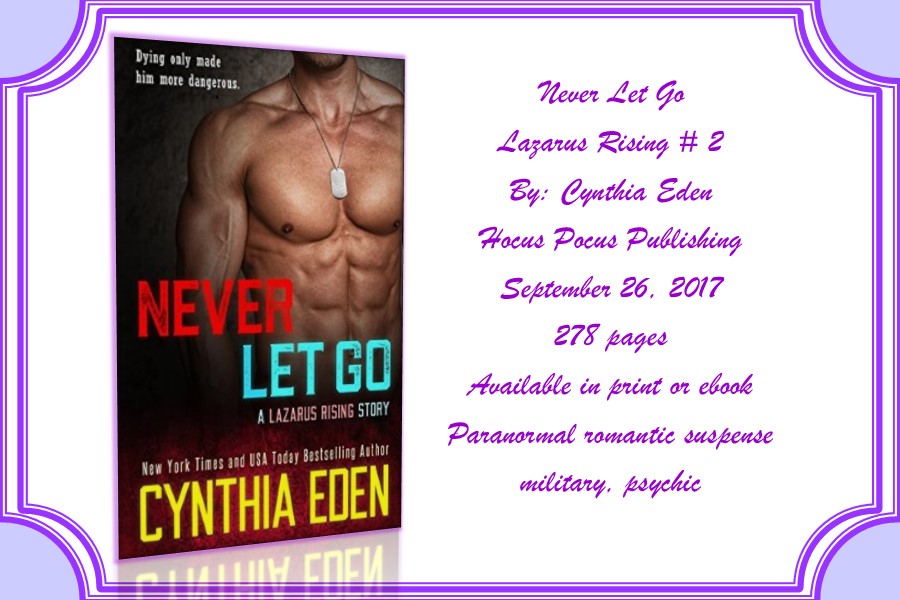 He was more than just a man...

Dr. Elizabeth Parker didn't like wild, dangerous men...yet she still found herself falling for sexy Navy SEAL Sawyer Cage. He was her exact opposite--a man she should definitely stay away from, a man who lived for the thrill of danger...but he was also the man she found herself wanting more than any other.

But their secret relationship ended in heartbreak when Sawyer was killed on a mission. Grieving for him, the last thing Elizabeth ever expected was to find Sawyer listed as a test subject for the top secret government project she was heading--a project called Lazarus.

For years, Elizabeth had worked feverishly to unlock the secrets of life and death, and with her Lazarus formula, she finally thought she'd made a breakthrough. Only she never expected to use Lazarus on her lover.

But the choice is taken out of Elizabeth's hands...

Sawyer is given the Lazarus formula, and he's transported to a remote government facility. At that facility, Sawyer wakes once more, only he's not the same man. He's stronger, he's faster, his reflexes and his senses are ten times better than an average man's. The government calls Sawyer a super soldier... Elizabeth still calls him...hers.

Unfortunately, Sawyer has no memory of his life before Lazarus. All he knows is that something about the sexy doctor awakes a primal response in him. He wants her, and he'll do anything to possess her. Soul-deep, he feels that she was meant to be his.

Death waits in the darkness.

But something is wrong inside the Lazarus facility. The test subjects are holding back secrets, and danger seems to lurk in the air. The Lazarus subjects are super-human now, and some of those subjects have a very, very dark side. Twisted cravings drive them to the very edge of sanity. Can Sawyer keep Elizabeth safe from the madness around them...or will the growing darkness consume them both?

Cynthia Eden’s newest series Lazarus Rising is off to a great start with Never Let Go!

It brings us into a military world full of action, drama, intrigue and romance with a touch of paranormal and as always with Cynthia Eden’s books a thrilling plot that just doesn’t let the readers go. It was medium to fast paced as the situations called for and full of thrills and the uncertainty of not knowing what would happen next which of course meant that I had to keep reading. The surprising twists happened throughout the book but none more surprising than the ones toward the end of the book which kind put a whole new perspective on the story and introduces readers to a character whose cagey, intriguing and leads us to believe that he just may have a few surprises of his own for us readers to uncover in future books.

All the characters were dynamic and attention grabbing with Elizabeth and Sawyer’s chemistry exploding from each and every page. Their romance was hot and steamy with some major emotional and turbulent times keeping the reader on pins and needles throughout. The secondary characters also added drama and chemistry to the book and ensured that readers will want to come back for more.

It is always a pleasure to read a book by Cynthia Eden and this is certainly no exception with its volatile topic that captures every readers attention as well as their imagination, I mean who isn’t captivated by the thought of bring the dead back to life, right?  Anyway, I am very excited that the next book, Keep Me Close is due to be released in just a few days because this is one series that I can’t wait to find out what happens next in.

Keep Me Close the second book is due to be released on October 24, 2017

Never Let Go is Available in print or ebook at: