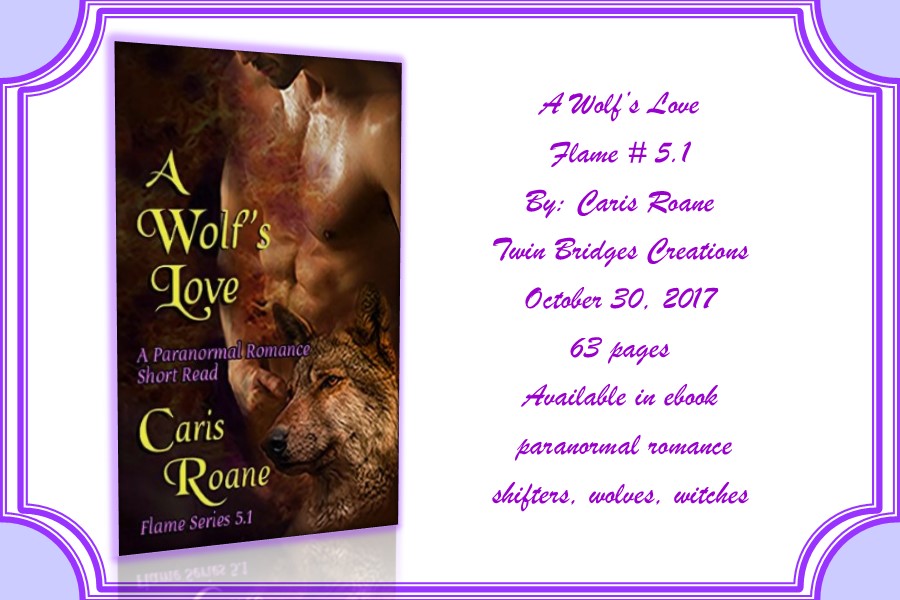 A WOLF'S LOVE is a sizzling paranormal romance and can be read in one sitting.

An injured wolf. A witch with killing power at the tips of her fingers. A young witch in danger. Will Cole set aside his hatred of witches to help Lauren save a girl from certain death?

Cole shifted his stance. He’d never known a woman like Lauren, not before his alter transformation two years ago, not since.
But she was a witch and in one terrible move, she’d proven how much he couldn’t trust her. The break had been final. He was still mad as fire.
He crossed his arms over his chest. “I know you’re there. Show yourself, witch.”
~ A Wolf’s Love, A Paranormal Romance

About A WOLF’S LOVE:

Cole never wanted to see Lauren again. She was a witch who’d hurt him. Bad. Wolves and witches don’t get along. But when she asks for his help to rescue a teenage girl from a vicious drug lord, he can’t refuse. He’s a Border Patrol Officer in Five Bridges. He’s sworn to serve-and-protect. Yet when he sees Lauren again, his desire for her ignites once more. But how can he ever trust a witch who can kill him with the touch of her fingers?

Lauren fell hard for the wolf. They’d dated for three sizzling months that she thought would go on forever. But when he broke with her because he believed she lied to him, she knows he’ll never come back. Asking for his help to rescue a kidnap victim was the hardest thing she’d ever done. But will being close to him break her heart all over again?

A WOLF’S LOVE, A Paranormal Romance, is a passionate, tender, standalone romance set in the Flame Series and the world of Five Bridges.

The alter inhabitants of the Five Bridges world has once again enthralled me with the latest short story, A Wolf’s Love number 5.1 of the Flame series.

Cole and Lauren have some red hot chemistry that heats up the pages and a romance full of turbulent emotions during a rocky relationship. The romance keeps suspense building and at the same time the fast pace of the action keeps readers glued to the pages on the edge of their seats.

I love the Flame series and all of its characters so the fact that I loved this story doesn’t surprise me especially because Caris Roane creates some fantastic world that all keep me riveted and wanting more. At the end of A Wolf’s Love, I only had one wish; that the story wouldn’t end so I can’t wait for my next visit to Five Bridges which is hopefully coming soon.

A Wolf’s Love is available in ebook at:

Caris Roane can be found at: