Golem in My Glovebox (Monster Haven #4) by R.L. Naquin

In her role as Aegis, Zoey Donovan has rescued and cared for hundreds of monsters and mythical creatures. Now humans are the ones in need of her help. Someone with a personal vendetta against the Board of Hidden Affairs has kidnapped all the other Aegises in the country--including Zoey's mother.

With the Hidden government in shambles and a string of deadly clues to follow, Zoey and her reaper boyfriend set out on a cross-country chase to stop the kidnapper from killing the captured Aegises. Along the way, they pick up a miniature golem who's on a quest to find his humanity...and may be the key to solving the grisly clues.

If Zoey succeeds in defeating this new evil, she'll finally be reunited with the mother she lost over twenty years ago. But if she fails, she'll become the final victim.

Don't Miss Monster in My Closet, Pooka in My Pantry, and Fairies in My Fireplace, available now!

The fourth book in the Monster Haven series is an intriguing and fascinating fantasy read.  The Hidden government is in shambles and with only string of deadly clues to follow, Zoey and Riley set off on a cross-country chase to stop the murders of the captured Aegises. Will Zoey become the final victim of this new evil or will she finally be reunited with her mother?

This fast paced plot keeps the reader on the edge of their seat with suspense and action. The author brings this urban fantasy to life with vivid descriptions and details that bring the story to vibrant life and capture the imagination and tension building suspense as the reader follow Zoey and Riley on their cross-country chase and the danger escalates as time runs out.  The characters are strong, compelling, easily related to and grabs the reader’s attention from the very beginning.

The story has romance in it between Zoey and her reaper boyfriend, Riley, but they really are a little too busy to trying to find this new evil, defeat it and saving the captured Aegises.  The characters draw the reader deeper into the story as the reader gets totally caught up in the drama.  The story invokes a large range of emotions throughout including chuckles, tears, happiness, anger and even some creepy crawlies mixed in as well.

The author has created a fascinating world inspired full of wonderful creatures with her own unique spin that inspires curiosity as well as entertaining and she keeps the reader guessing with some surprises along the way.  I do recommend however that the series be read in order to achieve the full impact and a better understanding of the world and the Hidden that live there.  That does not mean that it can’t be read in order you choose, though, as this is my first book and I found it to be an enjoyable read, there were just a few events that were referred to and some politics of the Hidden government that I felt I would have understood better if I had read the previous books, which I will be remedying soon. 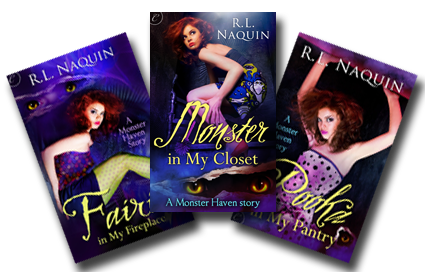 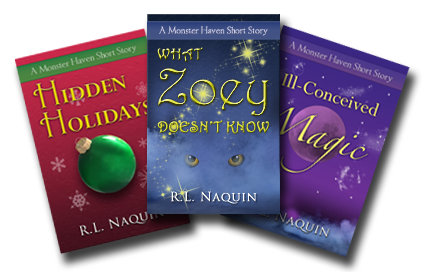 R. L. Naquin is an urban fantasy novelist and short story writer. She writes the Monster Haven series for Carina Press. You can find her on the Web at: www.rlnaquin.com

Rachel’s head is packed with an outrageous amount of useless Disney trivia. She is terrified of thunder, but not of lightning, and often recites the Disneyland dedication speech during storms to keep herself calm. She finds it appalling that nobody from Disney has called yet with her castle move-in date.

Originally from Northern California, she has a tendency to move every few years, resulting in a total of seven different states and a six-year stint in England. Currently, she’s planning  her next grand adventure. Rachel has one heroic husband, two genius kids, a crazy-catlady starter kit, and an imaginary dog named Waffles.

She doesn’t have time for a real dog.