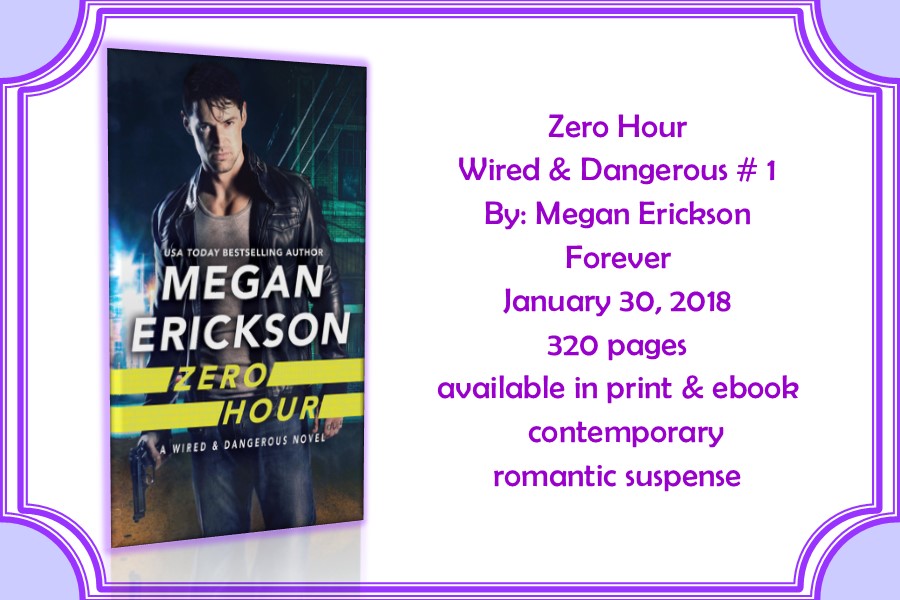 Hacker extraordinaire Roarke Brennan lives each hour - each breath - to avenge his brother's murder. His first move: put together a team of the best coders he knows. They're all brilliant, specialized, and everyone an epic pain in his ass. Only now Wren Lee wants in too, threatening to upset their delicate balance. The girl Roarke never allowed himself to want is all grown up with sexy confidence and a dark past ... and she's the wild card he can't control.

Roarke might still think she's a kid, but Wren's been to hell and back. Nothing and nobody can stop her - especially the tatted-up, cocky-as-all-hell hacker. But when years of longing and chemistry collide, Wren and Roarke discover that revenge may be a dish best served blazing hot.

Zero Hour is a thrilling read full of suspense, thrills and romance. The characters draw readers in with their strong, compelling presence and the fast paced story keeps the anticipation building throughout.

The story is a bit misleading because you expect it to be more sedate than it is because of the stereo typing belief that hackers are all about their computers. That is definitely not the case here as readers find out almost right off the bat. The hero and heroine, Roarke and Wren are two characters that demand attention and captivate readers with their charismatic personalities that are somewhat expected but are so much more than expected that I just had to get to know them better. Which leads me to their romance, it is full of emotional turmoil which adds lots of depth and tugs at heartstrings.

Now, we get to the thrilling suspense of the story, it is not only fast paced, I have to agree with the “Fast & Furious” feel of the story. It has lots of twists and unexpected surprises that really keeps readers on the edge of their seats as the anticipation builds throughout. Along with the question of whether these characters will let revenge rule their lives, will revenge be enough, will it come between the growing relationship and even the question of whether they will survive?

Zero Hour is the first book that I have read by Megan Erickson and what a great one to start out with. I was glued to the pages from beginning to end and found the world exciting and daring and the author brought it vivid life, so I am looking forward to not only reading the next book in the Wired & Dangerous series but more books by Megan Erickson.

Zero Hour is the 1st book in the Wired & Dangerous series.

Zero Hour will be available on January 30th in print & ebook at;

Megan Erickson can be found at: