Early Review: Beyond Danger (The Texas Trilogy #2) by Kat Martin 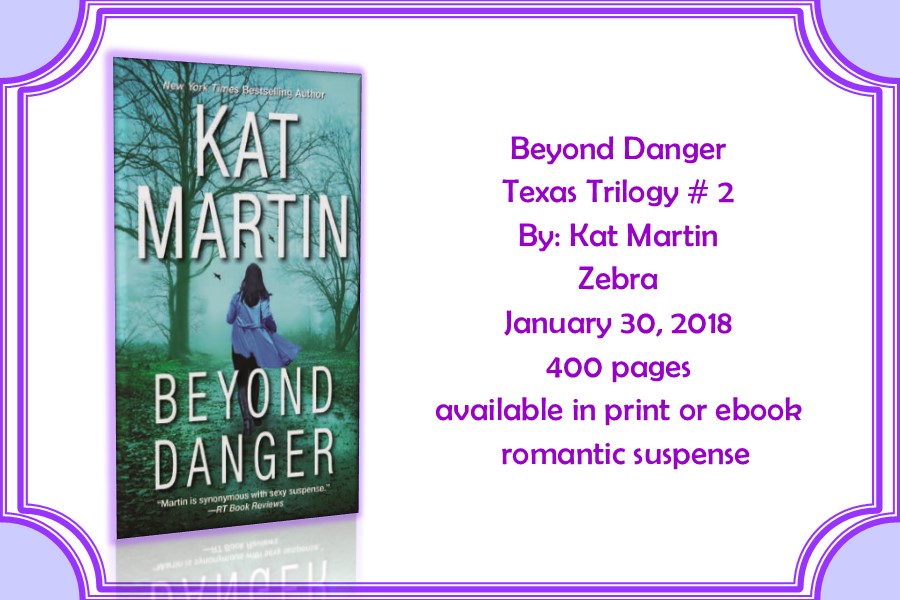 Texas mogul Beau Reese is furious. All six feet three obscenely wealthy, good-looking inches of him. His sixty-year-old father, Stewart, a former state senator no less, has impregnated a teenager. Barely able to contain his anger, Beau is in for another surprise. It appears that Stewart has moved an entirely different woman into the house . . .

Beau assumes that stunning Cassidy Jones is his father’s mistress. At least she’s of age. But those concerns take a sudden backseat when he finds Stewart in a pool of blood on the floor of his study—and Cassidy walks in to find Beau with his hand on the murder weapon.

The shocks just keep coming. Someone was following Stewart, and Cassidy is the detective hired to find out who and why. Now she’ll have to find his killer instead. Her gut tells her it wasn’t Beau. And Beau’s instincts tell him it wasn’t Cassidy. Determined to track down the truth, they form an uneasy alliance—one that will bring them closer to each other—closer to danger and beyond . . .

Beyond Danger enthralls readers with lots of suspense and a romance that begins with a very uneasy alliance.

Anticipation steadily builds throughout the story, not only in regards to the romance but the danger and excitement that stems from nefarious characters that are dead set on keeping Cassidy and Beau from learning their secrets. The twists and thrills ensure that this fast paced story never has a dull moment and that readers aren’t sure just who the real enemy is nor what he is really up to.

I have read lots of great books by Kat Martin, but this is the first one in the Texas Trilogy that I have read and I have to tell you that I can’t believe that I haven’t read the first one yet, because as usual Kat Martin paints vivid pictures of her stories that make the readers feel as if they are part of the unfolding story. Beyond Danger was a very exciting read that kept me glued to the pages and not only am I going back and reading Beyond Reason, but I can’t wait to read Beyond Control, which is due to be released in May.

Beyond Danger is the 2nd book in The Texas Trilogy.

The 1st book Beyond Reason is available now and the 2nd book Beyond Control is set to be released on May 29, 2018.

Beyond Danger will be available on January 30th in print & ebook at:

Kat Martin can be found at: