Chuck Barrett is the kind of author that is as interesting as his novel, Blown, so be sure and check out his bio and my review below.

He also has some fantastic covers. 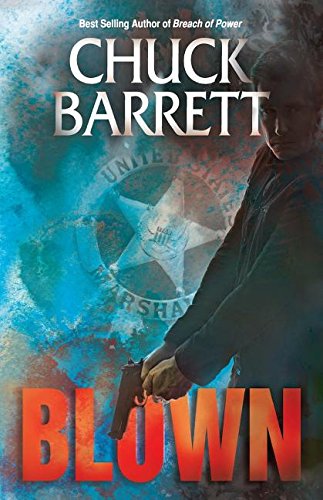 Blown is a military thriller mystery adventure with sexy and dangerous Gregg Kaplan.

Gregg Kaplan was a Special Forces assassin, but now he works on the civilian side of government. He had to find her. He had four hours. But something happened and his cover is Blown.

He had made Tony, Senior Inspector Moss of the Marshal's Service,a promise. A promise is a promise and he would deliver the man to WitSec, no matter what.

I quickly became enamored of Kaplan and his unique skills.

The woman he is searching for is his love interest from Toymaker. I have not read that...yet.

The identity of the assassin was a marvelous surprise.

I love complex scenarios with more than one angle. It keeps the mystery alive and me on the edge of my seat with suspense, trying to figure it out.

Chuck Barret makes me think he brings his personal life into his books with nicknames for his characters, like Dirt Man for Pete Moss. What can I say? It's that something extra that gives the writing that additional kick. Do we see a book coming in the near future telling us his story? Could Greg and Tony become a team? I can see it.

I received Blow from Chuck Barret in return for an honest review.

Gregg Kaplan is not an ordinary man, but a man with special skills, courtesy of the United States Government.

His assignment is to stay off the grid when he innocently stumbles into a blown witness protection detail in Little Rock, Arkansas. He simply could not walk away from the impending mayhem. After the dust settles, a mortally wounded Deputy U.S. Marshal makes him promise to personally deliver the witness to a U.S. Marshals Service safe site. Not just a promise, an oath. A pledge between ex-Army Delta Force comrades. A trust that could not be broken—Once in, never out. Kaplan soon suspects the witness he vowed to protect has secrets of his own; secrets that go beyond his testimony for the U.S. government. When he discovers the witness is being tracked, Kaplan teams with a WitSec Deputy U.S. Marshal assigned to recover the witness, but soon realizes some merciless people are dead set on preventing the witness from reaching the safe site. But the witness has a hidden agenda of his own—One that could cost Kaplan his life.

Barrett is a Florida native and a graduate of Auburn University. He is a retired air traffic controller with over 26 years experience and veteran commercial pilot & flight instructor spanning over three decades of flight experience. Chuck also holds Dive Master and Rescue Diver certifications. He enjoys hiking in the Rockies with his wife, Debi and currently resides in Northeast Florida.

All covers link to Amazon.