Ashley Fontainne is an amazing award winning and bestselling author that you will want to check out. Her novels are so good, they are being optioned for film. Ashley Fontainne has teamed up with her …

Ashley Fontainne is an amazing award winning and bestselling author that you will want to check out. Her novels are so good, they are being optioned for film.

Ashley Fontainne has teamed up with her mother, Lillian Hansen, in her new release, Blood Ties.

I am so excited to share all the goodies below, so please, grab a beverage, put your feet up and enjoy.

Ashley Fontainne and Lillian Hansen's Blood Ties has a level of creepiness and reality that will linger long after you have finished reading the novel. The mother and daughter writing team continues into the characters of the story with Karina and her mother, LiAnn.

Karina, a private investigator for We've Got Ya, and LiAnn, a cop, had become sickened after their last case, that dealt with the abuse of senior citizens in assisted living facilities and quit their jobs. Now, it was off to Grandma and Grandpa's farm in Arkansas.

Karina does not have female friends, except for her mother, who is her best friend. I love Karina's badassery and the snarky dialogue between and her mother. My mother is my best friend and I spend more time around men than women. Who has time for cat fights, jealousy and shopping? Not me. I am not afraid to tell my mother anything, like Karina, sometimes in very "colorful" words. I do love Karina's foul mouth and her "take out my gun and shoot you" attitude. I love fast cars and beer, too, Karina. She has a black Charger, with dark tinted windows and racing tires. She named it Dragula, after a Rob Zombie song based on the Munsters. Makes me think of driving the country roads when I first moved south with my Monte Carlo SS and doberman. Karina has a big dog, a 100lb black lab. I sure see the similarities and feel right at home with Karina and her family.

Of course, we need a love interest and her encounter with one of the twin Greek Gods had me grinning at the descriptive writing, which drew me further and further into Blood Ties.

Karina's biggest Achilles heel is the mistreatment of senior citizens. She will not stand by and watch them be neglected or abused...by anyone.

The Magnolia is an assisted living facility that houses some of her grandparents friends. As Karina and LiAnn become aware of some funky goings on, they begin to investigate on their own.

Caesar is a mobster, a ruthless criminal and ex assassin that has taken many lives. When his wife dies, I find it impossible to feel empathy for him. What about the families he ruined? He has his sights set on The Magnolia, but...money isn't the only thing he will be taking from the seniors.

Nick runs The Magnolia and sold his soul to the devil - Caesar - in return for money. He stuck his head in Caesar's noose and would never get it out. Terror stalks him, day and night.

The Magnolia is understaffed with poorly trained workers, residents are neglected and abused - lawsuits and government investigations abound. How relevant is that today? Will you be in an assisted living facility? Blood Ties is a very thought-provoking novel that will haunt me into my golden years.

What can I say? I LOVE Blood Ties. Ashley Fontainne and Lillian Hansen's ability to grab me from the beginning and keep me turning page after page, unable to put the book down, is proof of their awesome writing. The emotion I felt while reading ranged from happy and playful to rage and the need for justice. But is there any justice for crimes so despicable that I cannot find the words to describe them?

Blood Ties by Ashley Fontainne and Lillian Hansen is the first in a three-part murder mystery/suspense series and I can hardly wait to see what they come up with next!

I received the ARC of Blood Ties in return for an honest review.

LiAnn Tuck and her daughter, Karina Summers, are settling into their new life, enjoying the small farming community of Sheridan, Arkansas. The slower pace, compared to the craziness of Los Angeles, is a welcome distraction for them both. Taking care of her aging parents and their small farm is just what LiAnn needs to forget her twenty-five-year career as a detective. And Karina's new love interest brings back the smile she lost from years of undercover work and her cheating ex-boyfriend.

Their idyllic lifestyle changes the minute a family friend, Cecil Pickard, pays a visit. He lives at The Magnolia, an independent living facility in Hot Springs, and believes someone is stealing from him. LiAnn and Karina offer to investigate and suddenly find themselves inside a living nightmare.

Theft isn't the only criminal activity taking place inside the historic, stately walls of The Magnolia. Organized crime has infiltrated Hot Springs, and what they're after is not only money, but life itself. As LiAnn and Karina dig deeper, they might just be digging their own graves.

Award-winning and International bestselling author Ashley Fontainne is an avid reader of mostly the classics. Ashley became a fan of the written word in her youth, starting with the Nancy Drew mystery series. Stories that immerse the reader deep into the human psyche and the monsters that lurk within us are her favorite reads. Her muse for penning the Eviscerating the Snake series was The Count of Monte Cristo by Alexandre Dumas. Ashley’s love for this book is what sparked her desire to write her debut novel, Accountable to None, the first book in the trilogy. With a modern setting to the tale, Ashley delves into just what lengths a person is willing to go when they seek personal justice for heinous acts perpetrated upon them. The second novel in the series, Zero Balance focuses on the cost and reciprocal cycle that obtaining revenge has on the seeker. For once the cycle starts, where does it end? How far will the tendrils of revenge expand? Adjusting Journal Entries answered that question: far and wide. Her short thriller entitled Number Seventy-Five, touches upon the sometimes dangerous world of online dating. Number Seventy-Five took home the BRONZE medal in fiction/suspense at the 2013 Readers’ Favorite International Book Awards contest and is currently in production for a feature film. Her paranormal thriller entitled The Lie, won the GOLD medal in the 2013 Illumination Book Awards for fiction/suspense and is also in production for a feature film. The suspenseful mystery Empty Shell, released September 29, 2014. Ashley then delves into the paranormal with a Southern Gothic horror/suspense novel, Growl, scheduled for release in the Spring of 2015. Plus, she will be teaming up with Lillian Hansen (Ashley calls her Mom!) to pen a three-part murder mystery/suspense series entitled The Magnolia Series. The first book, Blood Ties, is due out the Summer of 2015. Ashley also hosts The WriteStuff, a popular BlogTalk Radio show, each Friday night at 10 p.m. CST.

Check out my review for her awesome novel, Growl, here. 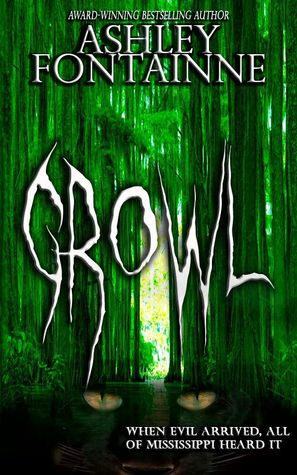