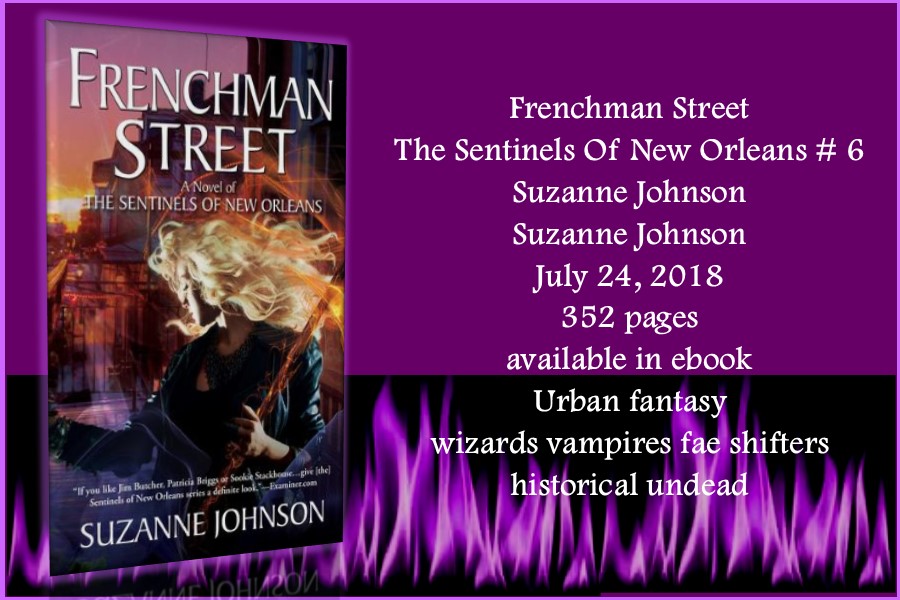 The uneasy truce between the preternatural species of New Orleans has shattered, with wizards and elves, shifters and vampires—not to mention the historical undead—struggling for ultimate control of the city, including the humans who still think they’re atop the food chain.

They aren’t, however—and the Summer Prince of Faerie wants them to know it.

Stuck in the middle? One unemployed wizard sentinel. For DJ Jaco, war makes for strange bedfellows as she finally embraces her wizard-elven heritage and strikes a deal with the devil so she and her ragtag band of allies can return to defend her hometown. After all, when the undead French pirate Jean Lafitte is the mayor’s newest consultant, things could go horribly wrong.

War is coming to New Orleans in time for Mardi Gras, with the elves and wizards lined up on opposite sides, the shifters with a new leader, the vampires promising loyalty to the highest bidder, and the soul of the Crescent City resting on the outcome of the civil war going on in Faerie between the rival princes of summer and winter.

Mardi Gras Day is approaching fast, and the line between friends and enemies grows thin as DJ tries to stave off open warfare on the St. Charles Avenue parade route.

Laissez les bons temps rouler…but be careful, or the good times might roll too close for comfort. I turned to glare at the unicorn. It was hanging around for some reason.
“Can you talk? If not, what are you waiting for?” I made a shooing motion. “Go home to your whack-job master.”
Because we needed to find out how it got to our remote beach in the Beyond.
“I’ll find a rope—maybe we can make a halter,” Rene said, walking toward the house.
Jean also seemed to have had his fill of unicorn wrangling. “Bah. I shall depart for Old Orleans, Drusilla. There are people with whom I must discuss matters of import, and perhaps I might discover the truth about Christof.”
Fine. Leave me with the merman and the unicorn.
He turned and walked into the transport, disappearing in seconds. He hadn’t removed his boots, but he had held his pistol out of the water. The pirate had his priorities straight.
“Here is my message.”
I whirled to look at the unicorn, who was now doing his best Mr. Ed impression.
“I knew it.” That freaking unicorn could talk; he’d been waiting to get me alone.
I held up the elven staff, and the unicorn had the good sense to back up a couple of steps. I slipped my left hand into my jeans pocket, fingering a couple of potions I’d cooked up in this rustic paradise using a generator-powered hot plate and my own blood. My physical magic wouldn’t work outside the human world, but my potions and charms were fine. The staff worked everywhere.
“Okay, start talking, horse.”
The unicorn managed to look offended. “Here is my message,” he repeated. “His Royal Majesty Florian will be crowned King of Faerie and of All Species of Earth and Beyond in two weeks. You are—”
“Wait.” I shook the staff at him, and sparks flew out its tip. “What do you mean, ‘King of Faerie and of All Species of Earth and Beyond’?”
What in the name of Merlin was that madman up to?
The unicorn tossed his head and looked even grumpier. “Here is my message,” he repeated for the third time. “His Royal Majesty Florian will be crowned King of Faerie and of All Species of Earth and Beyond in two weeks. You are invited to attend and pledge fealty at his coronation in New Orleans at the apex of the celebration the humans call Mardi Gras. Should you die before the appointed time, this invitation may be considered null and void.”
And with that, the unicorn turned, took a big, steaming dump on the sand near my feet, and made to trot back down the beach from whence he came. I flipped the lid off one of the charms in my pocket, chased him down the beach, and tossed it on him. I only hit his tail, which, considering it was a freezing charm, only made said tail freeze at a ninety-degree angle.
“Stop, unicorn, or I’ll toast your rump like a potroast!” I yelled, aiming the staff. I sent a warning zap of fire onto his rump. My aim had improved a lot in months since I’d blown up my own SUV and burned down half of Six Flags New Orleans. I’d had lots of time to practice.
Unfortunately, the shot only made the unicorn fly into a gallop. I had no choice but to run after him and hope I could keep him in sight by moonlight. With the shattering of the uneasy truce between the preternatural species of New Orleans everyone is struggling for control of the city which puts our favorite, at the moment unemployed wizard sentinel right in the middle of some life altering and extremely intense and exciting events in the thrilling conclusion to The Sentinels of New Orleans series.

The thrills and chills keep coming throughout this fast paced and smooth flowing plot keeps readers on the edge of their seats, glued to the pages and biting their nails with anticipation from beginning to end. The intrigue and plotting never stops as DJ accepts her wizard –elven heritage and strikes a deal with the so that she and her ragtag band of allies can return to defend her hometown. There is lots of surprising twists to keep readers guessing throughout the story and lots of exciting events taking place while the war is brewing that intensifies the anticipation and puts so much pressure on DJ, that readers have to wonder if she will collapse or win the day. And that’s not to mention the emotional turmoil that DJ finds herself facing, turmoil that changes her relationships, her life and events that are taking place throughout the city.

There is never a dull moment to be found but it’s not all fighting because there are moments to celebrate, moments that add a few chuckles, excellent scenery and of course the good time feel of New Orleans during Mardi Gras which adds to the whole atmosphere of the story. Suzanne Johnson brings her world and her fascinating, unique and fun characters to vivid life that it makes it easy for readers to imagine and to become enthralled with them.

And while, I really don’t want this series to end because I could never get enough of DJ or my favorite historical undead, Jean Lafitte, Suzanne Johnson gave it an explosive, thrilling and satisfying conclusion. I can’t wait to find out what she has in store for us readers next…

& #6 Frenchman Street which is now available in ebook at 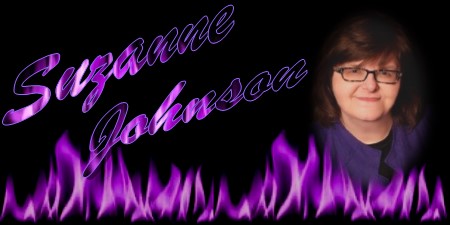 On Aug. 28, 2005, Suzanne Johnson loaded two dogs, a cat, a friend, and her mom into a car and fled New Orleans in the hours before Hurricane Katrina made landfall.

Four years later, she began weaving her experiences and love for her city into the Sentinels of New Orleans urban fantasy series, beginning with Royal Street (2012), of which Frenchman Street is the sixth and final book in the story arc. She also has written Pirateship Down and The Consort, both set in the Sentinels world, and the standalone Christmas in Dogtown.

She grew up in rural Alabama, halfway between the Bear Bryant Museum and Elvis’ birthplace, and lived in New Orleans for fifteen years, which means she has a highly refined sense of the absurd and an ingrained love of SEC football and fried gator on a stick.

She can be found online at her website or her blog.

Suzanne currently lives in Auburn, Alabama, where she works as a full-time author and copyeditor. 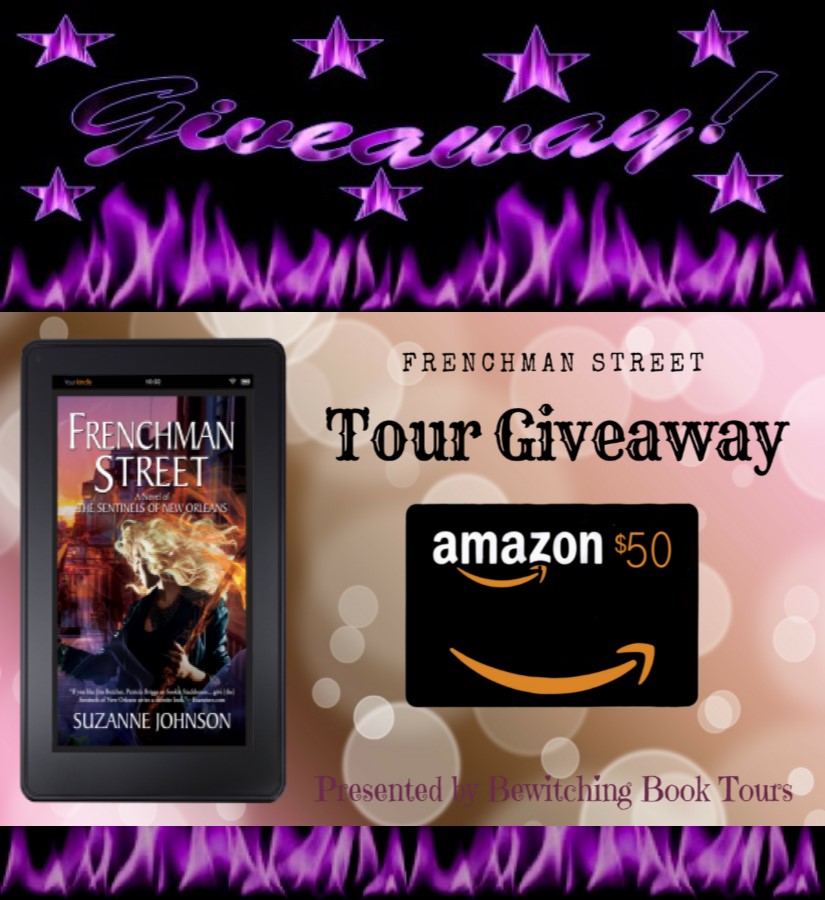 Open internationally. For international winners, equivalent order from Book Depository will be substituted if desired.

You can visit other tour stops at:

July 23 Momma Says: To Read or Not to Read
http://mommasaystoreadornottoread.blogspot.com/

July 30 3 Partners in Shopping, Nana, Mommy, and Sissy, Too!
http://3partnersinshopping.blogspot.com 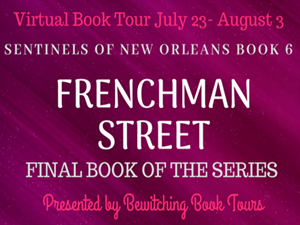