In order to find her father's killer, Helena of York is forced to play the most dangerous game of her life. The Saxon noblewoman, now an outlaw, must adopt a false identity and pose as a Norman in the courts and great halls ofRichard I's England. Should she be unmasked, her life will be forfeit. But Helena is willing to pay any price for her revenge. Stephen, Count of Dinan, once Richard's greatest friend and most able knight, finds himself an outcast from the court for reasons shrouded in mystery. Now known as the 'Black Baron', he finds himself a friendless outcast in a glittering world he has come to despise. Two dangerous destinies.The only goal in Stephen's life is to restore his honor and once again serve his king. The only desire in Helena's life is to kill the man who destroyed her father and her future. Then the 'Black Baron's' suspicions draw him into Helena's web of deceit and, together, they find themselves entangled in a greater conspiracy that threatens the throne of England itself and two embattled hearts that have allowed themselves to be touched by love.

The second book in the Jewels of Tomorrow is an awesome blend of history, legends, and romance.

This book is an intriguing mix of history and myth combined with mystery and romance to make this a very enjoyable read.  Tracy Cooper-Posey continues to enthrall her readers with wonderfully written stories with her attention to detail and exceptional imagination.

See the Full Review at:

She turned to indie publishing in 2011. Her indie titles have been nominated four times for Book Of The Year and Byzantine Heartbreak was a 2012 winner.  She has been a national magazine editor and for a decade she taught romance writing at MacEwan University.

She is addicted to Irish Breakfast tea and chocolate, sometimes taken together.  In her spare time she enjoys history, Sherlock Holmes, science fiction and ignoring her treadmill. An Australian, she lives in Edmonton, Canada with her husband, a former professional wrestler, where she moved in 1996 after meeting him on-line. 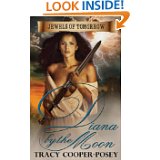