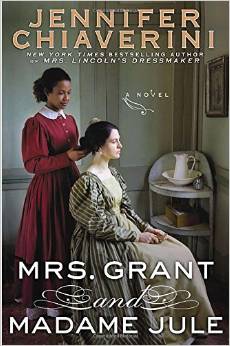 When a young Lieutenant Ulysses S. Grant first began courting Julia Dent everyone agreed that they made an unlikely match.  He was a northern abolitionist and she was a southern Missouri belle who personally owned a slave.  He was tall, slim and handsome while she was (self described) dumpy, plain and had one crossed eye resulting in poor sight.  But, love is blind, and against all the nay-sayers they wed.  As his star began to rise during the Civil War Julia followed him from state to state offering constant support, love and sometimes advice.  Despite the fact that he was fighting to eliminate slavery, quite often Julia’s slave Jule accompanied Julia on these treks to offer her services as ladies maid and nanny to the children.

Ulysses was not fond of this arrangement, but because he loved his wife, he allowed it.

Julia did not see anything wrong with having Jule by her side.

Jule, growing increasingly more aware of the rights of “colored people”, was waiting for an opportune time to run. 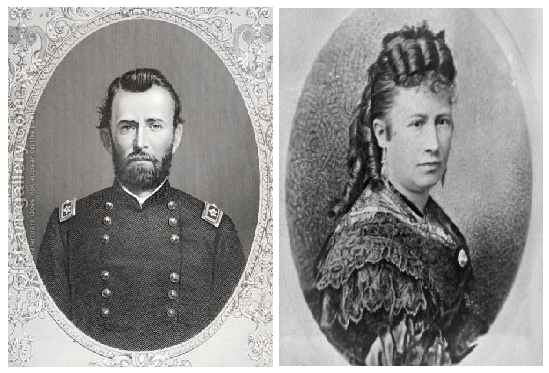 This book tells the story of these three historical figures against the backdrop of the Civil War.  If one looks at this book as a historical text Ms. Chiaverini does a commendable job of incorporating all the important elements of what was happening in the last half of the 1800’s and introducing her readers to all the pertinent players from President Lincoln on down.  At one point or another throughout the book she hits upon the current events of the time either as an accurate accounting or using one generalized event meant to portray any number of similar events of the era.  She gives us highlights of Civil War battles without going into reenactment-worthy detail.

Of course, this book is not a historical text it is historical fiction so, although fact based and well researched, Ms. Chiaverini has taken some liberties to make this into the very readable book that it is.  As Ms. Chiaverini states in her acknowledgments …

“Many events and people appearing in the historical record have been omitted from this book for the sake of the narrative.  Although the lives of Ulysses and Julia Grant are well documented, almost nothing exists about Jule beyond a few brief mentions in Julia Grant’s memoirs.  Thus her life as depicted in this story is almost entirely imagined.”

And quite an imagination it is.  It was a wonderful story – beautifully told – that even had me a little misty eyed at the end.

This book is the story of a man who refused to ever retrace his steps and kept moving forward to achieve his personal goals and other “goals” thrust upon him.

This is a book is the story of a runaway slave who through grit and determination makes a success of herself in post-emancipation America.

But mostly, this book is the love story of two people who seemed unsuited to each other and yet despite differing political and personal opinions, through a long and bloody war, made it work.

When I read the book description I knew I wanted to read the story of Julia and Jule but somehow it kept being put aside in favor of other books.  I finally decided to pluck it off my virtual ereader shelf and start reading.  Once I started I did not want to put the book down.  I have noticed that Ms. Chiaverini has a few other works of historical fiction centering on figures from the same time period that were on the sidelines in “Mrs. Grant and Madame Jule”.  I enjoyed Ms. Chiaverini’s writing of historical fiction so much with this entry that I have already added the others to my TBR list. 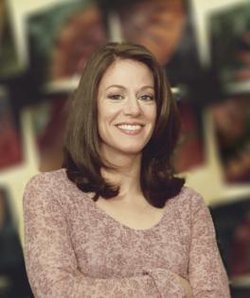 Jennifer Chiaverini is the New York Times bestselling author of several acclaimed historical novels and the beloved Elm Creek Quilts series, as well as six collections of quilt patterns inspired by her books. Her original quilt designs have been featured in Country Woman, Quiltmaker, Quiltmaker's 100 Blocks Volumes 3-5, and Quilt, and her short stories have appeared inQuiltmaker and Quilters Newsletter. A graduate of the University of Notre Dame and the University of Chicago, she lives with her husband and two sons in Madison, Wisconsin. About her historical fiction, theMilwaukee Journal Sentinel writes, "In addition to simply being fascinating stories, these novels go a long way in capturing the texture of life for women, rich and poor, black and white, in those perilous years."