The vibrant yellow color on the cover of Island Secrets by R T Wolfe jumped out at me and made me check this out further. I do judge a book by its cover, at least my first impression. The cover can make me read on or pass it over for the next book.

I love stories that have anything to do with the water, so as I read the blurb, I wanted to read it even more. 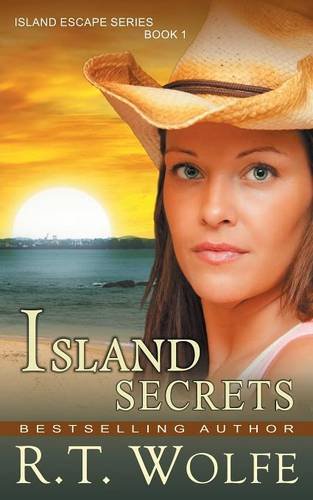 OMG, a tropical island, treasure, murder, mystery and romance. Island Secrets is the complete package. Once I started, I could not stop until the last sentence was read.

Zoe is a boat captain and was a scuba instructor and guide, until she sold out to Dane after the death of her brother. She felt the guilt for letting him dive alone and was determined to find out what happened. She would not rest until she found his body.

Zoe can be a bit pushy, lol, which is putting it mildly. She refuses to be kowtowed to and coddled. She is not a hardcore, kickass ninja type, just independent  and tough.

Dane is a treasure hunter. So why did he buy the business and why isn’t he out finding treasure? I think we know. He found Zoe infuriating and, oh so, desirable.

The small town cop was lazy and incompetent, but ruled his domain like a king. Ilbis Island is a small community and like all small towns, everyone knew everyone’s business. So…what’s the big secret?

What a job, cruising on the Gulf, watching the dolphins frolicking, checking out the birds at the sanctuary and I sure do wish I was on the tour with Zoe.

The dance scene with Dane and Joe was sizzling HOT! When they finally hooked up, I couldn’t help but breathe a sigh of relief. I won’t call this is a spoiler, because we all know it is going to happen. The sexual tension had been so thick you could cut it with a knife.

I love that R T Wolfe included all the wonders of Florida, not just the gorgeous turquoise water, but the bird life, loggerhead and green turtles and the need to protect them and the sea oats and dunes that help to save the beaches the casual way they dressed, half naked, the open air bars, the pleas to not on the dunes, use special lights so the turtle don’t go the wrong way when they emerge from the sand….

It’s as if I am living the life, well I pretty much am. It is all so familiar, except the skull and the murder. When Zoe walked on the beach, I felt the sand between my toes, the water rolling over my feet and the breeze heavy with salt in the air, coating my skin.

I have driven over the Skyline Bridge, just to say I did it. It is a beautiful view, with miles of water and I was lucky enough to be there at sunset.

I was so engrossed in the book I could not put it down until I found the answers I knew wouldn’t come until the end. What a fantastic journey it was. I wanted to sit at the bar with Dane, Zoe and her family. I wanted to lick my wrist, sprinkle the salt, lick the salt, down the shot of tequila and suck the lime wedge, chatting about what we did that day. It brings back such good memories to me. I have been there, done that, all while looking out over the Gulf and enjoying the salty air.

I loved this book, the writing was descriptive and detailed, putting gorgeous pictures in my mind. The mystery is still alive for Book II, but Island Secrets story was told.

I received a copy of Island Secrets by R T Wolfe in return for an honest and unbiased review.

When Zoe Clearwater learns that the skull she found in an underwater cave is her missing brother, she sells her scuba diving business, Sun Trips Touring, and dedicates herself to unravelling her brother’s mysterious death.

Dane Corbin, the new owner of Sun Trips, is determined to prove to Zoe, now his employee, that he is not the womanizer he once was. But it’ll take more than profit to turn Zoe’s head.

Her investigation at a standstill, Zoe unearths letters from a secret lover among her brother’s possessions, along with plane tickets, a promise to run away to safety, and the painful realization that she’ll need Dane’s help.

As mercurial clues plunge Zoe and Dane into a life-threatening pursuit and the truth burns brighter and brighter, Zoe recognizes she needs Dane as much as her brother’s un-named lover needed him. But Dane will have to make it to safety, first.

The muscles in his body reflexively tensed as he recognized the faint shade of dark blue that tinted her fingers and lips.

“Hey.” His hair dripped water on her face as he maneuvered over her and gave her a shake. “Zoe. What the hell? Are you okay?”

Her eyes rolled in his direction. She looked as if she’d seen a body. “Don’t call me Babe,” she croaked.

An unwanted smile spread across his face and, despite himself, he brushed the strands of hair from her smooth cheek. Checking the area, he spotted her pure oxygen tank under the boat dash. As he crawled to it, he noticed the expiration date was months away. At least she followed some rules. Her hand swatted him as he maneuvered the nosepiece under her nostrils.

“You won’t soon. You ascended too quickly. I can tell. Breathe this, or you’re going to feel it.”

Of all things, she lifted her arm like she was checking for her frigging camera. Her lids closed when she spotted it on her arm. He hoped it was a sign of defeat as he slipped the oxygen tube around her head.

He glanced over his shoulder to make sure all was well with his boat, then searched for her cell in her bag. He couldn’t leave his divers, and he couldn’t leave Zoe. Knowing what he was doing, she grabbed his hand and shook her head. Cats’ eyes the color of the green water pleaded with him.

“I’ve got a boat out, Zoe. How do you think I found you? I have six divers in the water. I can’t leave them there with only my assistant.”

She let go and her eyes drifted closed again. Life was much easier before she talked him into buying out her business, before she started working for him. R.T. was born and raised in the beautiful Midwest, the youngest of six ornery children. She married at a young age and began her family short after With three amazing small boys, life was a whirlwind of flipping houses and working two jobs in between swim lessons and Candyland. Now that her boys are nearly grown, R.T. spends much of her time on the road traveling from one sporting event to another serving as mom and cheerleader. She works to assist the several non-profit organizations that have supported her books and promote the work they do for those who cannot help themselves.

R.T. Wolfe will be awarding a $25 Amazon or Barnes and Noble GC to a randomly drawn winner via rafflecopter during the tour.