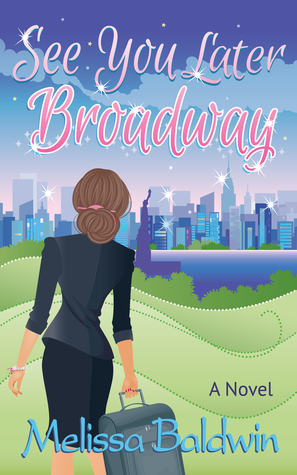 In See You Later Broadway, the second book of the Broadway series, author Melissa Baldwin weaves a sassy tale that continues to follow the Broadway dreams, life choices and decisions, and complicated romantic trials and tribulations of Maris Forrester.

Set in New York City and told in the first person narrative, the reader was introduced to Maris Forrester in the first book of the series, See You Soon Broadway. The reader followed Maris as she made the decision to move from her hometown to NYC to chase her dream of performing on Broadway. Now in See You Later Broadway, Maris' story continues as her aspirations to perform on Broadway go awry when unexpected choices leaves her with a lot of decisions to make in her career and romances, in order to move forward with her life.

This was such a fun book to read, it had a great mixture of drama, humor, and romance, that easily kept me engaged and laughing as I followed the continued unfolding of Maris' story. Anyone can relate to the craziness surrounding dreams and goals, and how the best laid plans can unexpectedly go awry, especially when romance issues are added into the mix. There are lot of laugh-out-loud moments and surprising twist and turns: from her family and friend relationships, to her complicated romances, to her determination to follow through on her career plan to star on Broadway. Nothing is going to keep this sassy lady from achieving her dreams and finding happiness in her life.

See You Later Broadway is a fast paced and thoroughly enjoyable romantic comedy that will leave a smile on your face.

Disclaimer: I received a copy of the book from the author in exchange for my honest review and participation in a virtual book tour event hosted by Chick Lit Plus.