When Greer Addison finds her future husband in bed with another woman, she runs…right into the arms of dark and dangerous Raphael Marcel. Angry and hurt, she throws caution to the wind
and spends a hot night with the sexy security specialist. But when her fiancé is found dead, Greer becomes the main suspect of a crime she can’t remember.

Raphael is stunned and suspicious when Greer shows up on his doorstep claiming she’s carrying his baby. Worse, she’s the target of a stalker bent on making her pay for a murder she doesn’t recall. As Raphael begins to trust Greer, they must race against the clock to uncover a killer.
Because Greer’s memory is returning...

The third Secrets and Sins book is a riveting romantic suspense that captures the heart. After spending a hot night with a security specialist, Greer finds her fiancé dead and she becomes the main suspect in his murder, but she has no memory of what happened.  When Greer shows up on his doorstep pregnant, Raphael is stunned and suspicious, worse she’s the target of a stalker bent on making her pay for a murder she doesn’t recall.

The fast paced and smooth flowing plot keeps readers on their toes and the adrenaline pumping with lots of suspense, action, drama and romance.  The author paints vivid images of the events and scenes with well written words and details that capture the imagination and makes the reader feel as if they are right in the middle of the action.  The strong compelling characters are easily related to and draw the reader deeper into the story. Spine tingling tension builds throughout the story keeping the reader on the edge of their seat as the danger escalates especially when Greer starts to remember.

The attraction and chemistry between burns hot enough to singe the reader and the sex scenes are scorching hot, but the relationship is a little slow to catch up to the passion because of their emotional issues.  The reader can’t help but get emotionally caught up in both characters stories as they have both been emotionally betrayed by loved ones and the author brought tears to my eyes in a couple of places, and Greer courage and strength captures the heart and had me wanting to beat her parents upside the head with a baseball bat (she’s better off without them).

I was totally engrossed in the story from beginning to end and I found it enjoyable and entertaining with some twists that I sure didn’t see coming and captivating characters that have me wanting to know more. I haven’t read the first two books in this series but I am definitely curious about Gabe and Mal stories now and of course I can’t wait for Chay’s. 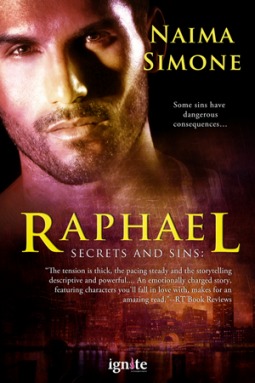 I was born the daughter of a sharecropper…okay, maybe not. But, I am the daughter of a pastor from whom I inherited my love of romance. The man can preach a mean Song of Solomon! (There’s that plug, Daddy! You can pay me later!)

Although my first book starred a cucumber named Fred, my first romance came several years later in the seventh grade when I wrote myself as a heroine opposite Ralph Tresvant from New Edition. Through the power of my pen and imagination, Ralph took one look across a crowded stadium, met my dark, mysterious gaze, fell passionately in love and serenaded me in front of millions of fans. Out of all the girls in the world, he chose me! And, of course we lived happily ever after—once we had the inevitable fight, aka black moment, and made up with a passionate declaration of love and fidelity. This same story reincarnated itself many times over the years: with Donnie Wahlberg from New Kids on the Block, Brad Pitt, Denzel Washington, and as recently as last night, Vin Diesel.

Though the characters have changed, my love of love has endured. Shaping the lives of the unique men and women who experience the first, hungry bites of lust, the dizzying heights of passion and the tender, healing heat of love— nothing compares to it. Except maybe discovering new material for love scenes with my husband, the head of Research & Development!