.
I am happy to be able to kick off the month of October with this wonderful story about Ellie Jordan, Ghost Trapper by J L Bryan for Kiss Off Book Tours. 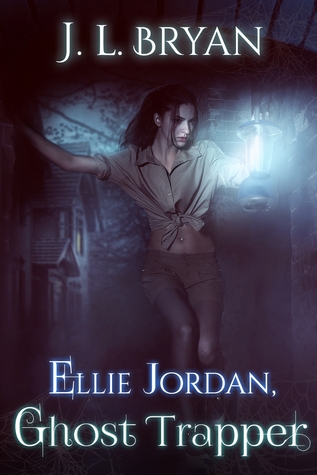 Add me to Goodreads now.
.
Ellie Jordan, Ghost Trapper (Ellie Jordan, Ghost Trapper #1) by J.L Bryan
Publication Date: August 27th, 2014
Genre: Adult Paranormal Mystery
MY REVIEW
.
Ellie Jordan, Ghost Trapper by J L Bryan is an eerie tale that had me laughing and cringing as Ellie and Stacey investigate a haunted mansion. It made me think of the movie, The Ghostbusters and the TV show, Ghost Hunters. There are plenty of screams and chills that you will not want to miss.
.
Ellie had trained her whole life to be a ghost trapper. Now she is a senior investigator for Eckhart Investigations. She has a degree in psychology that comes in handy when assessing the legitimacy of her clients. Ellie felt she didn’t need any help, but her boss, Calvin, coaxed her into it. It was a good thing.
.
Stacey is just learning, but I love her snarky attitude.
.
All jobs start with research and the mansion has a sordid history.
.
Ellie and Stacey set up all their equipment and wait.
.
Imagine…sitting there, alone, in the dark, and watching the bolt locking the door slide open on its own, feeling a huge drop in temperature, knowing something is there but unable to see it. Loud voices, banging, screaming…
.
l loved the tone of the writing, it had me laughing out loud.
.

“Well, let’s go check out the dark basement of the abandoned insane asylum. Nothing could possibly go wrong down there.”
.

They have ghost pajama parties and a mock funeral. There was much more going on than they anticipated and it was becoming very dangerous.
.
Ellie Jordan, Ghost Trapper, started out in a Scooby Doo sort of way, but turned more Supernatural as the story went on.
.
“Let’s split up to save time”
“Isn’t that what they always say in a horror movie? Right before somebody gets killed?”
“Usually, yeah. So hurry.”
The characters had me yelling, don’t go in there, watch out, get out of there. I couldn’t help myself. I even felt sympathy for one of the ghosts. They are not all bad, are they?
.
J L Bryan’s writing had me hooked from the beginning. I liked the humor mixed with the danger of very unhappy evil spirits.
.
I loved the ending and couldn’t help but smile as I went to check out more of what J L Bryan has to offer. So if your house is haunted, be sure and call Ellie Jordan, Ghost Trapper. She will get the job done!
.
I picked up Ellie Jordan, Ghost Trapper, a while ago, so when I saw the tour, I decided this was the perfect time to review it.
.

4 Stars
Summary from Goodreads
Ellie Jordan’s job is to catch and remove unwanted ghosts. Part detective, part paranormal exterminator, Ellie operates out of Savannah, Georgia, one of the oldest and most haunted cities in North America.
When a family contacts her to deal with a disturbing presence in the old mansion they’ve recently purchased, Ellie first believes it to be a typical, by-the-book specter, a residual haunting by a restless spirit. Instead, she finds herself confronting an evil older and more powerful than she’d ever expected, rooted in the house’s long and sordid history of luxury, sin, and murder. The dangerous entity seems particularly interested in her clients’ ten-year-old daughter.
Soon her own life is in danger, and Ellie must find a way to exorcise the darkness of the house before it can kill her, her clients, or their frightened young child.
Amazon / Barnes / Kobo / iBooks / Smashwords

I was interested in writing about ghosts because, unlike pretty much any other kind of paranormal critter (vampires, werewolves, etc.) it’s not clear whether ghosts are real or not. I thought it would be fun to write a detective series about a character who deals with them all the time.

One time my wife and I were staying with some friends who lived in an old house in Athens, Georgia. We slept downstairs and were the only people on the floor. We were both awoken at the same time by a deep male voice saying “shoo, shoo” just a few inches above our heads, like someone was leaning over us and talking. Nobody else was in the room. We didn’t tell our friends about it until they’d moved out of that house.

I’ve always been interested in the supernatural and sort of looking into mysterious and unexplainable events. I also think that we can learn about ourselves through imagining human beings in extreme circumstances, whether that’s dealing with paranormal monsters or a dystopian future society.

Probably the ghost ones, like early on when she’s first encountering the ghost in the house, or later when they have to visit the abandoned old insane asylum to look for clues.

I really enjoy writing both Ellie and Stacey and how they interact with each other. Their psychic friend Jacob is becoming more and more fun to write with each book.

I don’t because I don’t keep up with newer actors very well. This would be a really interesting blog post if someone else wanted to do it, though (hint, hint!).

I have a toddler, so I pretty much just write whenever I can. A lot of times that’s late night! I try to hit specific wordcounts, but it always goes slowest earliest in the first draft and gradually picks up steam. Then I go through a number of drafts before sending it for editing.

I’ve actually done kind of a silly amount of research for this series, and I still do. First, I’ve read or listened to as many true (or supposedly true) ghost stories as I can find. I wanted to learn all about what real ghostly experiences were like, instead of following other fiction. I also researched the real technology and procedures used by ghost hunters and applied those to Ellie’s investigative process. My goal has been to make it is as realistic as possible as far as reflecting “ghost culture” in the real world.

There was an old house in an overgrown field near where I grew up. People would say it was haunted. I think that was the scariest one because it was so close and I could have walked inside the place if I wanted to (but I didn’t want to). I don’t even remember a specific story about it, people said different things. I did watch a lot of Scooby-Doo as a kid, too. And I was obsessed with the Nightmare on Elm Street movies, which are about a certain kind of ghost.

I was thirteen and wrote a book about a delusional kid who dressed up in a dog costume and tried to fight crime, despite his lack of any superpowers or anything. It was called Dogboy.

How many real or supposedly real ghost stories are out there. I’ve read several books about ghosts just in the Savannah area alone. There are lots of books and websites that collect people’s ghost stories, and lots of people have personal stories if you start asking around. There are at least a dozen “ghost reality” shows on TV, where haunted buildings are investigated with technology or by psychics, or people recount experiences they claim to have had. The abundance of ghostly experiences by real people has made researching and writing the series much more interesting to me.

Read widely, not just in your own genre, read lots of books on craft, and write every day. Commercially, you want to write in a popular genre and make sure you have quality book covers that reflect the correct genre.

I like to read historical nonfiction, biographies, things like that. Nonfiction is great fuel for your imagination.

No! Not unless Ellie had cleared the place first.

I actually write some science fiction on the side, but it hasn’t done as well as the supernatural stories so I don’t focus on it. J.L. Bryan studied English literature at the University of Georgia and at Oxford, with a focus on the English Renaissance and the Romantic period. He also studied screenwriting at UCLA. He enjoys remixing elements of paranormal, supernatural, fantasy, horror and science fiction into new kinds of stories.He is the author of The Paranormals series of horror novels (Jenny Pox, Tommy Nightmare, and Alexander Death) the Songs of Magic series for younger readers (Fairy Metal Thunder, Fairy Blues, and Fairystruck…so far) and other books. He lives in Atlanta with his wife Christina, their son, and some dogs and cats.