Review: Through The Veil (#1) by Christi Snow 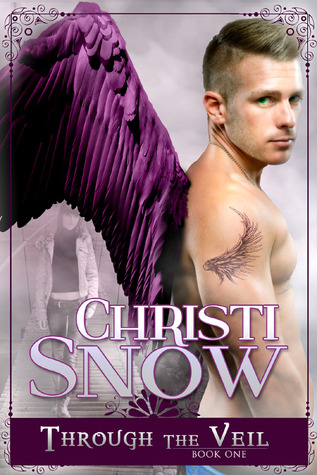 58 years ago a gorge opened up from Mobile, AL to Quebec City, Canada to split the United States into the Western States (WS) and the Eastern States (ES). 40 years later, a fog rolled in on the WS that they called the Veil. Within twelve hours it formed an impenetrable wall between the two sides. It's been 18 years since anyone has known what's happening on the other side of the Veil. Now, Lori, an Other, in a desperate attempt at escape from the ES's torture and experimentation, has crossed the Veil and found a world beyond belief. Marcus is a Warrior, but when Lori collapses at his feet wounded and exhausted, he knows he has to protect her. But seeing that she's the first person he's seen in 18 years without wings, he's worried about what her appearance means for his people and the world they've created since the Veil fell. Two new societies: one built on a respect for the natural order of nature and the world, the other built on mistrust and corruption. Can they learn to co-exist once again?

To escape torture and experimentation, Lori crosses the veil and lands at the feet of a warrior. Markus is drawn to protect the woman without wings even though he doesn’t know what she means to his people in this riveting post apocalyptic fantasy romance.

A steady to fast paced plot keeps readers on the edge of their seats with lots of suspense, excitement and romance. Lori left a world of mistrust and corruption behind but how can she know that Markus won’t betray her as well. The reader can’t help but get caught up in the story as Markus is drawn to protect Lori and they discover that their attraction to each other will not be denied. Passions burn hot but the relationship will take some time as each works through their emotional issues.

The well written scenes and details capture the imagination and paints vivid images of the setting to bring the story to life and the strong compelling characters grab the reader’s attention and ensure that the reader will come back for more. Spine tingling anticipation builds as the reader explores this fascinating new world right along with Lori, one that has its own share of danger and mysterious happenings. The various powers or gifts of each character adds lots of spice to the story along with the mystical quality of what exactly happened that caused the world to shift in this way and continues to change without notice.

There is never a dull moment in this fascinating world and the setting promises grand adventures for readers to enjoy. I was completely caught up in the story from the very beginning and the author kept me guessing with surprising twists and an intriguing world filled with interesting elements and bewitching characters and I can’t wait to find out what happens next.

As an avid reader my entire life, I’ve always dreamed of writing books that brought to others the kind of joy I feel when I read.

But…I never did anything about it besides jot down a few ideas and sparse scenes.

When I turned 41, I decided it was time to go after my dream and started writing. Within four months, I’d written over 150,000 words and haven’t stopped since. I’ve found my passion by writing about sexy, alpha heroes and smart, tough heroines falling in love and finding their passion. I’m truly living the dream and loving every minute of it.