I saw Ice Massacre by Tiana Warner and knew I had to have it.

This is not your romantic version of mermaids, so beware.

● Portrayal of mermaids based on the true legend of flesh-eating sea demons. ● Predominantly female cast of eighteen-year-old warriors and mermaids. ● Native American setting, near Haida Gwaii and in the Gulf of Alaska. ● LGBT: self-discovery and acceptance of sexuality. ● Themes of love, loyalty, betrayal, and trust. 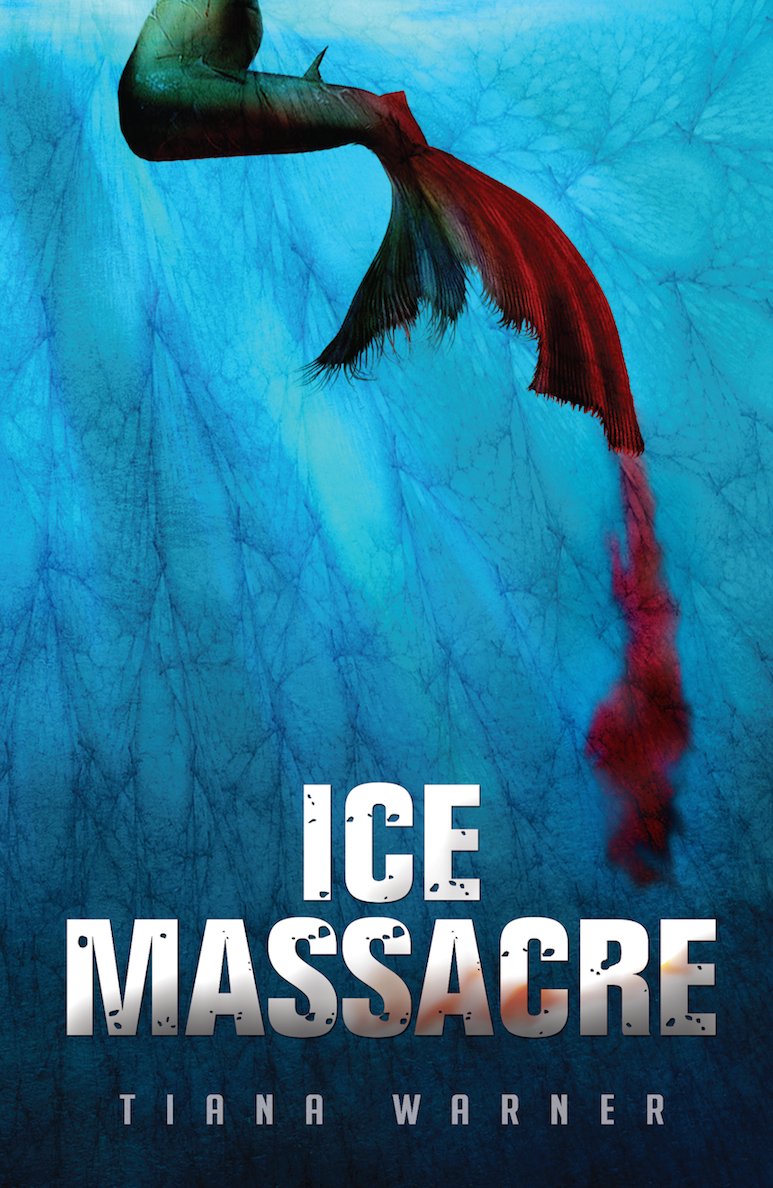 A mermaid’s supernatural beauty serves one purpose: to lure a sailor to his death. The Massacre is supposed to bring peace to Eriana Kwai. Every year, the island sends its warriors to battle these hostile sea demons. Every year, the warriors fail to return. Desperate for survival, the island must decide on a new strategy. Now, the fate of Eriana Kwai lies in the hands of twenty battle-trained girls and their resistance to a mermaid’s allure. Eighteen-year-old Meela has already lost her brother to the Massacre, and she has lived with a secret that’s haunted her since childhood. For any hope of survival, she must overcome the demons of her past and become a ruthless mermaid killer. For the first time, Eriana Kwai’s Massacre warriors are female, and Meela must fight for her people’s freedom on the Pacific Ocean’s deadliest battleground.

The cover jumped out at me and I knew Ice Massacre was a novel I had to have.

The blood spewing off the mermaid’s tail told me this would not be a nice story with warm and loving mermaids. Ice Massacre is a grim and dark tale. I am super excited to read a mermaid book in which the Splash version (which I loved) is replaced with vicious sea monsters. An original mermaid “tail”, probably more true to the legends than the romanticized version we seem to prefer. Ice Massacre starts out wicked bad and continues that way. This novel will wipe out any illusions or fantasies you have about the beautiful and sexy mermaids. Tiana’s writing is detailed and descriptive, riveting and engrossing, from beginning to end. Her ability to weave a story kept me reading long into the night. Oh, goodie, a mermaid hunter. I can’t believe it. New to me and I love it. I was thinking there will be a lot more to the story and I wasn’t disappointed. The island people are starving to death, because the mermaids do not allow them to catch their main resource, fish. They have no choice but to continue the massacres. Their very survival depends on it. Would the citizens of the island of Eriana Kwai get their life back, or stay poor, depending on others charity for their very survival? Since the age of thirteen, Meela had spent her life training for this moment. She is part of the Ice Massacre. The ship sails tomorrow and her life is in her own hands and that of nineteen other girls. The training masters methods were barbaric and desperate. Would twenty girls do better than the twenty men they’d sent all the years before? I walked with Meela through the woods to the dock. I heard the leaves rustling and smelled their musty fragrance, I heard the birds singing, and felt the mist hanging heavy in the air. Meela had been taught mermaids are sea demons that keep them from fishing, sink their ships and kill everyone on board. It did not stop her from becoming friends with a mermaid named Lysi, after saving Lysi’s life. They knew it was wrong, but it didn’t matter to them. The oceans are vast and Meela doesn’t understand why there isn’t enough for everyone. “Our friendship is stronger than her instincts.” I think that statement will be put to the test. Tiana Warner’s characters come alive on the pages. I loved and hated them. I yelled at them as they began to fight each other, wanting to warn them and help them in any way I could. Their very survival could depend on the girl next to them. Annith is her best friend. Other than Lysi. Dani is a bitch and that about covers her personality. She is mean, a bully. Tanuu is the young man in love with her. Tiana’s descriptions of the mermaids are so vivid I can see them; their red eyes, razor sharp teeth, webbed fingers, flesh morphing into scales to the end of their tail. They are ferocious and ugly, but can make themselves look almost human with lovely hair and bright alluring eyes with a voice that can hypnotize the human male. I can visualize the battle; the mermaids super strength, shells and darts used as weapons, against iron bolts and knives. The humans thought they had an edge because they could plan and strategize. Did they really believe that mermaids were only demon fish, with no ability to plan and execute? I couldn’t help but smile at the end. I LOVE it. That thought had entered my mind and came back to me off and on as I read htrough the novel, but it was still a bit of a surprise. A fantastic ending that is so unique and original, it will stick with me for a long time.

My only complaint is I want more.

I picked this up for free, during a tour I participated in.

Tiana Warner was born and raised in British Columbia. She graduated from UBC in 2011 with a bachelor’s degree in Computer Science, and works at a software company doing technical content marketing. Tiana is an avid supporter of animal welfare. In her spare time, she enjoys riding her horse, Bailey, and collecting tea cups. This is her second self-published novel.

Click on the cover below to get your Amazon copy of Ice Massacre, or learn more about Tiana Warner