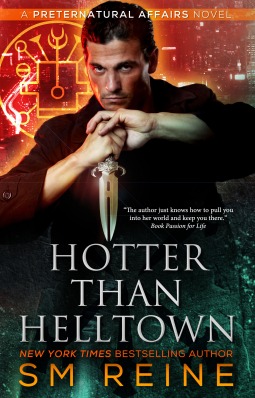 A killer is mutilating bodies in Los Angeles. Agent Cèsar Hawke is on the case, but the murderer is ahead of him--way ahead of him.

Wiping the memories of the dead so that the team's necrocognitive can't talk to them? Done. Preventing magical reconstruction of the crime scenes? Oh yeah. And the murders keep getting more brutal while Cèsar struggles to catch up.

The best way to heat up a cold case is to go to Helltown, where Los Angeles's most powerful evil hides out, but even those demons are afraid of the murderer. Their fear adds one more question to the growing pile of unknowns:

What kind of bad guy is too hot for Helltown?

Agent Cesar Hawke is on another case, a killer is mutilating bodies in Los Angeles and with questions piling up and the killings getting more brutal even the most evil demons in Helltown are afraid of the murderer in this intriguing paranormal case.

The story has a steady to fast paced and smooth flowing plot that keeps readers on their toes.  The author brings the story to life with well written scenes and details that capture the imagination and the well orchestrated drama and suspense draw the reader deeper into the story while the danger sends chills down the spine.  The strong compelling characters are easily related to, grab the reader’s attention and charm readers with their own special brand of humor.

Cesar doesn’t always follow the book and comes up with some unusual means of solving the crime and he’s about to find out that the murderer isn’t black and white either.  There are quite a few twists and turns that keep the readers guessing and lots of chuckles as the reader gets caught up in the drama and mystery of the case.  And let’s not forget about Isobel and Suzy who add their own brand of fun and drama to the story and to Cesar’s life, which adds depth and spice to the story and we also get to know a little more about the characters.

S. M. Reine creates enjoyable and entertaining worlds with her special spin that freshen up the story and gives them a fun but serious feel. I have to say I am going to have to go back and read the second book in this series because I somehow missed it, but lucky for me it wasn’t hard to catch on to where the characters are at.  I will say however that this one was a little harder for me to get into at the beginning than the first one, but once I got past that point everything picks back up and gets going strong as ever. 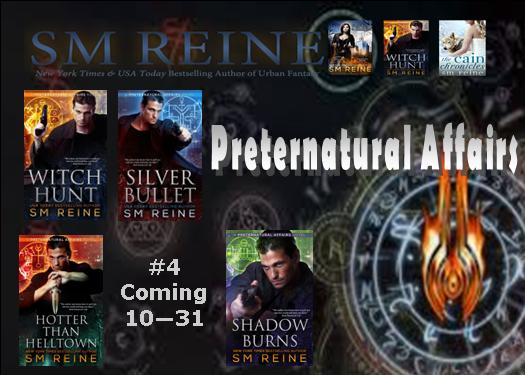 A standalone series about a former private investigator who gets a job with the Office of Preternatural Affairs – a secret government agency that polices demons and witches – and finds himself in over his head.

This series of mysteries/thrillers is much “lighter” than my other books, but it takes place in the same universe and there are some familiar faces. You don’t need to read anything else I’ve written to enjoy Preternatural Affairs.

You would think that writing about myself shouldn’t feel awkward after producing a few books, but it is.

I’m an Air Force brat who was born in the midwest, lived overseas for a few years, and came back to the United States to settle down in beautiful, barren Nevada. I’ve known that I wanted to be a writer for almost my entire life, after I finally gave up on becoming a velociraptor, and I wrote my very first book when I was twelve.

When I’m not writing–which is seldom–I’m nose-deep in geek culture. I am insane about movies. My favorite part is arguing about them, because whatever opinion you have is definitely not as good as mine. I’m also a big dork for video games. My Steam library is a force to be reckoned with, and my favorite game of the week is Kerbal Space Program.

Other hobbies include tickling my son until he passes out from giggling, cuddling my army of black kitties, and eating the delicious Italian food my husband’s restaurant makes. I’m also a strict meatarian and eat bacon for two meals every day.

For the record, because I do get asked all the time–I was born in 1988, so I’m not as young as I look, but younger than I have any right to be. My cheeks are frequently described as “pinchable,” but I’d like to see you try.