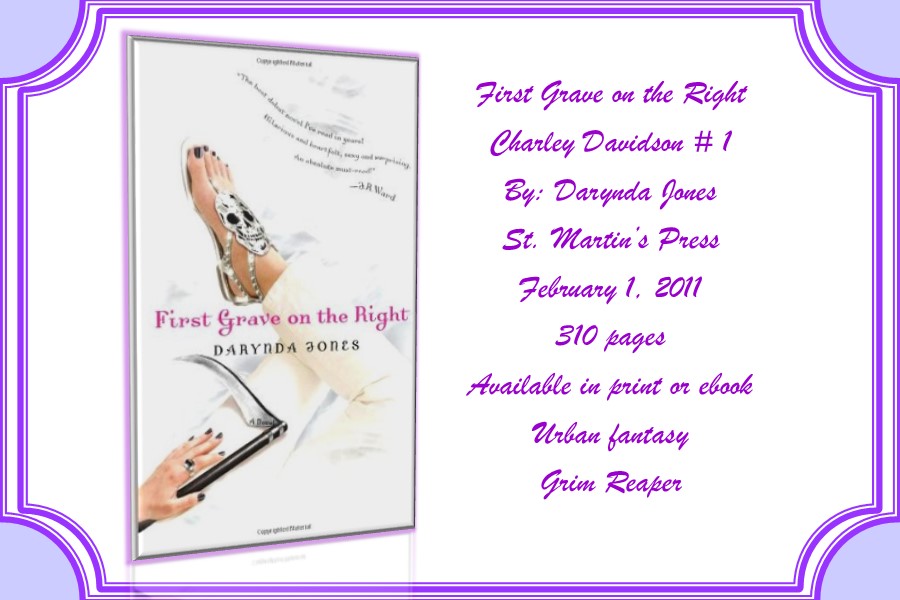 This whole grim reaper thing should have come with a manual.
Or a diagram of some kind.
A flow chart would have been nice.

Charley Davidson is a part-time private investigator and full-time grim reaper. Meaning, she sees dead people. Really. And it's her job to convince them to "go into the light." But when these very dead people have died under less than ideal circumstances (like murder), sometimes they want Charley to bring the bad guys to justice. Complicating matters are the intensely hot dreams she's been having about an entity who has been following her all her life...and it turns out he might not be dead after all. In fact, he might be something else entirely. But what does he want with Charley? And why can't she seem to resist him? And what does she have to lose by giving in?

With scorching-hot tension and high-octane humor, First Grave on the Right is your signpost to paranormal suspense of the highest order.

This book has a little bit of everything, paranormal, suspense, mystery, hints of romance, an intriguing story line that keeps readers wanting to know more and a main character that is snarky and vulnerable which has readers wanting to get better acquainted.

Charley Davidson’s character seems to have her life together, she’s a private investigator who consults with cops occasionally but she also has a secret side; she’s the grim reaper and unfortunately while she knows a little, there seems to be a whole lot that she doesn’t know about which adds a lot of intrigue but also makes her character vulnerable and one that readers can relate to. She has a snarky attitude and she’s full of pizazz which readers can’t help but like. The story hints at some hot and heavy chemistry with a shadow character that Charley’s not real sure is even real which adds even more suspense to a story that already has plenty and then there are a bunch of secondary characters that are every bit as fascinating as Charley who add quirkiness, laughs and drama.

An original storyline that hooks readers from the get go and the intrigue just keeps coming with twists and turns that keep readers on the edge of their seats and unable to put the book down.  A bit of mystery, a bit of action, well-written characters and quite a bit of dramatic interaction plays a big part in this book, add in a few laughs and readers never have dull moment.

Overall, the author does a fantastic job of engaging the readers with the multiple sub-plots, wonderful characters and a series opener that promises a phenomenally great time and I am looking forward to reading more of Charley’s adventures. Did I mention that I really love her name?

The 12th book The Trouble with the Twelfth Grave is due to be released on October 31, 2017

First Grave on the Right is available in print or ebook at:

Darynda Jones can be found at: