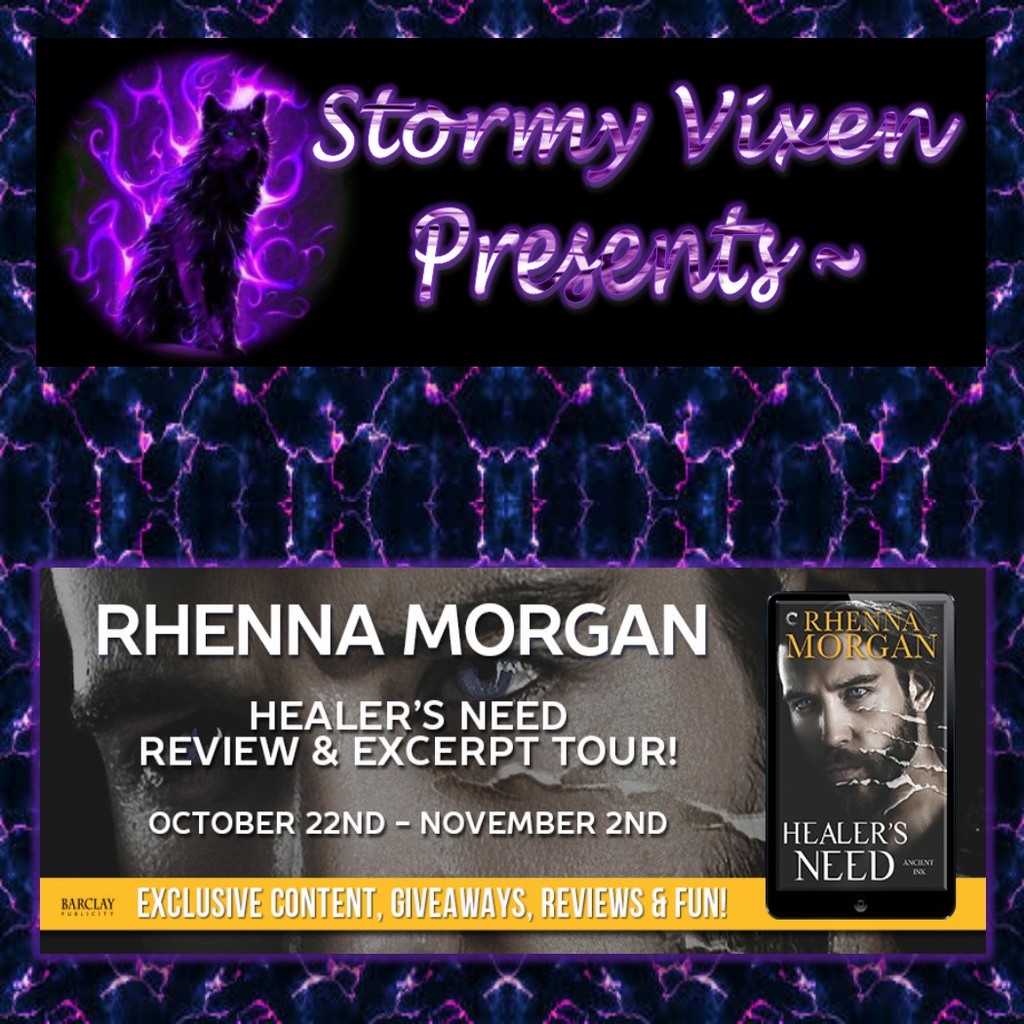 When the hunter is your mate, being prey is anything but terrifying... Coyote shifter Tate Allen has been watching Elise Ralston from afar ever since he recognized her as his mate. But when an unknown stalker threatens not only Tate's clan, but Elise for the gift she was born with, Tate must risk it all to protect his family and the woman he loves. Rhenna Morgan returns with this highly anticipated steamy new release in her Ancient Ink series which fans of Kerry Adrienne's Shifter Wars will love! 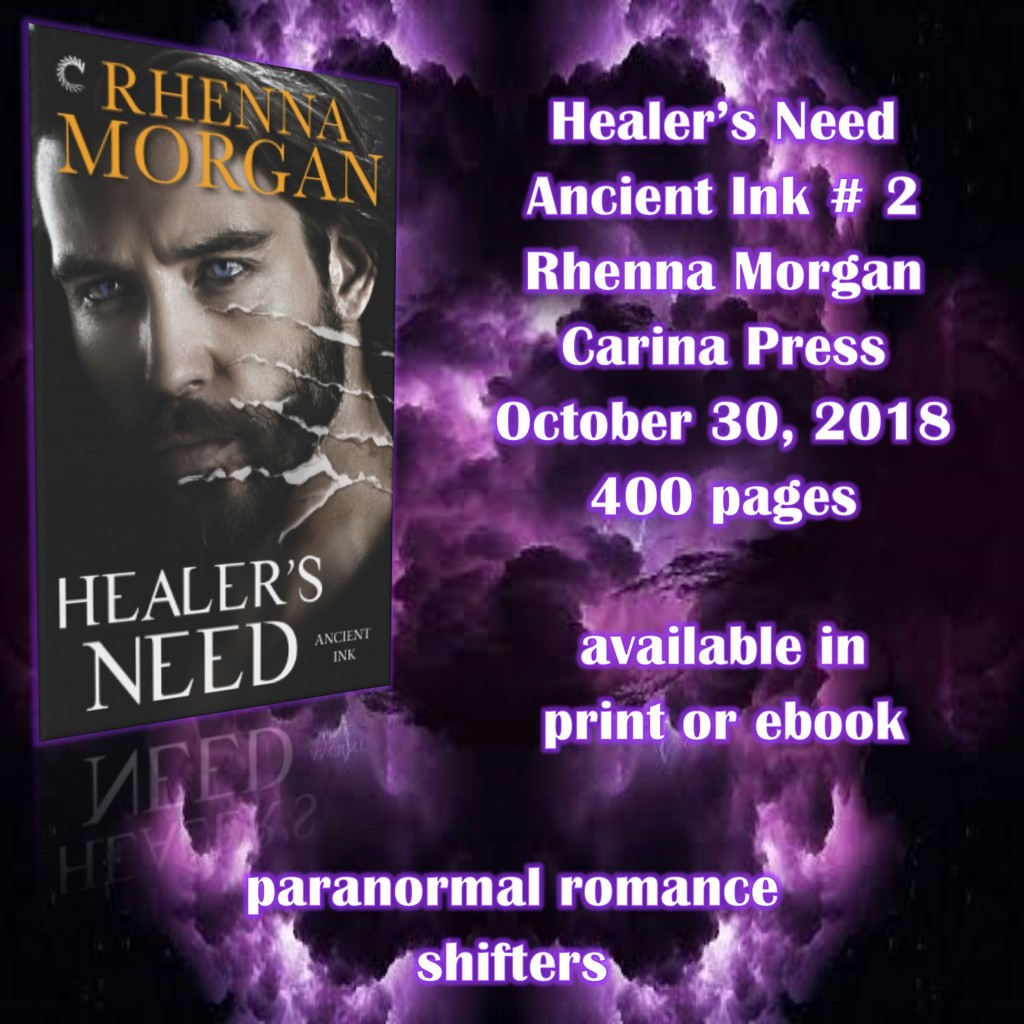 When the hunter is your mate, being prey is anything but terrifying…

Coyote shifter Tate Allen has been watching. Learning his mate every possible way before he moves in. Protecting her through the night, always from afar.

He’ll be the one to teach her about her gifts. He’ll be there when she changes for the first time.

With him, she’ll fulfill her destiny.

Elise Ralston loves Tate for the patience he’s shown. The faith he’s demonstrated—denying himself what he needs sexually, even as he teaches her about pleasure.

For Tate, Elise is willing to try. To revel in touch, to give him control…and to embrace her healer’s need.

But someone unknown is still stalking the clan, threatening more than Tate and Elise’s bond. And Elise is a prime target—precious for the magic she hasn’t even learned yet.

Healer’s Need is a fascinating and wonderfully unique shifter romance full of bold, convincing characters that seize readers by their imaginations and refuse to let go. The characters are bold but Elise may not end up being some readers’ favorite because of her shyness and insecurity which stems from childhood issues but Tate and Elise has some rocking chemistry that sets senses aflame as Elise works through those emotional obstacles and takes her place among the clan and building a relationship with Tate which has quite a bit of heated passion and lots of sweetness as Tate courts his mate.

The plot has a steady build up with a magnetic pull that keeps readers glued to the pages with lots of thrilling suspense and excitement with an adrenaline pumping climax. There are twists and turns throughout and while some of the suspense takes place in the relationship between Tate and Elise, the story also builds intrigue regarding their enemy and the steps the clan is taking to find him. The author has created a fascinating world with some creative and unique elements that make for an ideal change regarding shifter romances. Readers love how the characters receive their beasts through a “Soul Quest” and how the author integrated the tattoos as part of their magic and culture. This book can be read as a standalone, but to receive maximum enjoyment and understanding, they should be read in sequential order. 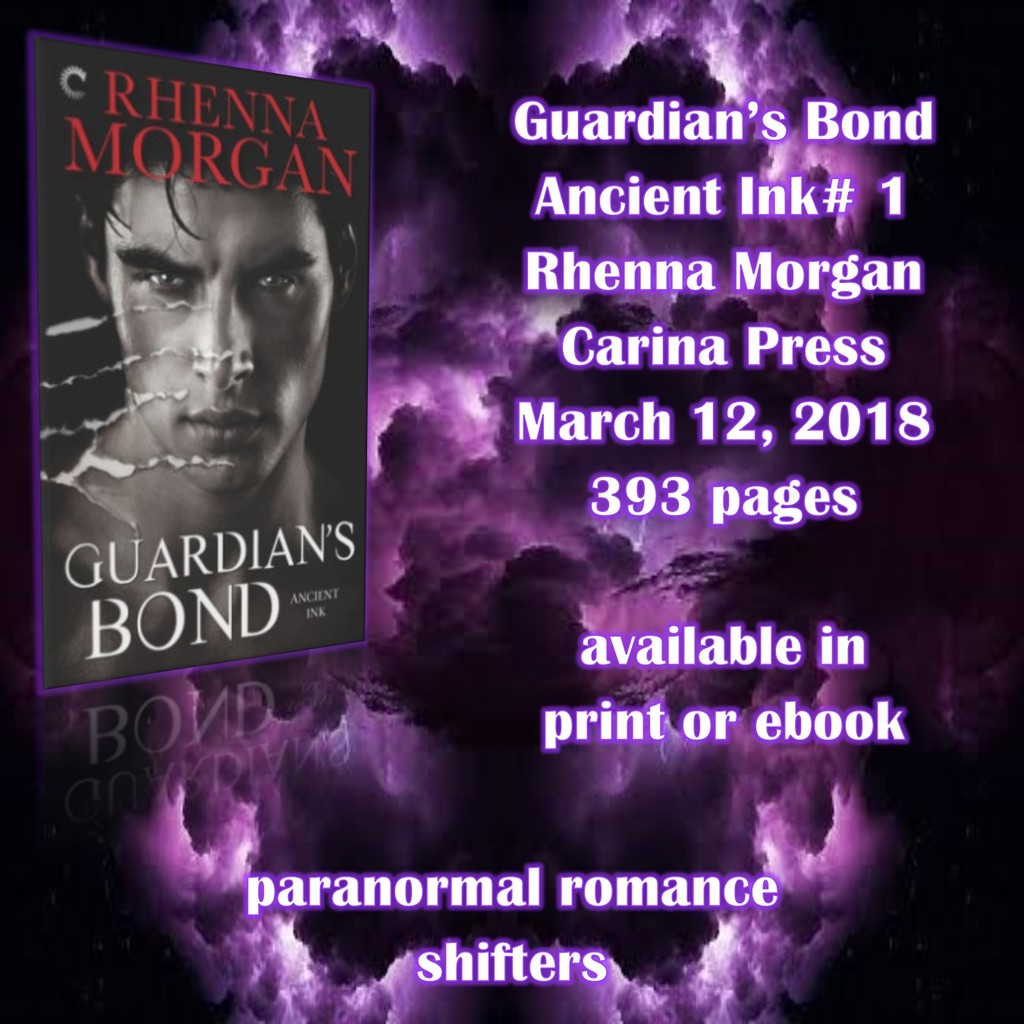 Priest Rahandras has lived with the darkness trapped inside himself for years. Betrayed by his own brother and forced to watch his clan’s brutal annihilation, the only thing Priest wants more than to escape the curse that haunts him—as both man and beast—is to rebuild.

Until the mate he’s longed for walks into his life with an elder from his past. She’s everything he’s wished for, and the key to the clan’s very survival.
Kateri Falsen is a woman of logic and facts. While Priest’s cat can sense her arousal, telling her they’re fated won’t be enough. He’ll have to show her his love: with his words, with his actions, and with his body.

Protecting Kateri from the evil trapped inside him is paramount. But when lost clan members are systematically murdered, he’ll have to choose between exposing his mate to his black magic, or risking her as the next victim. 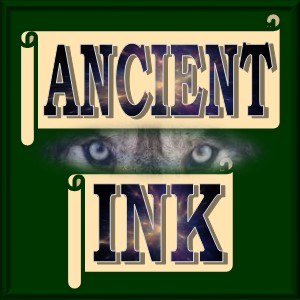 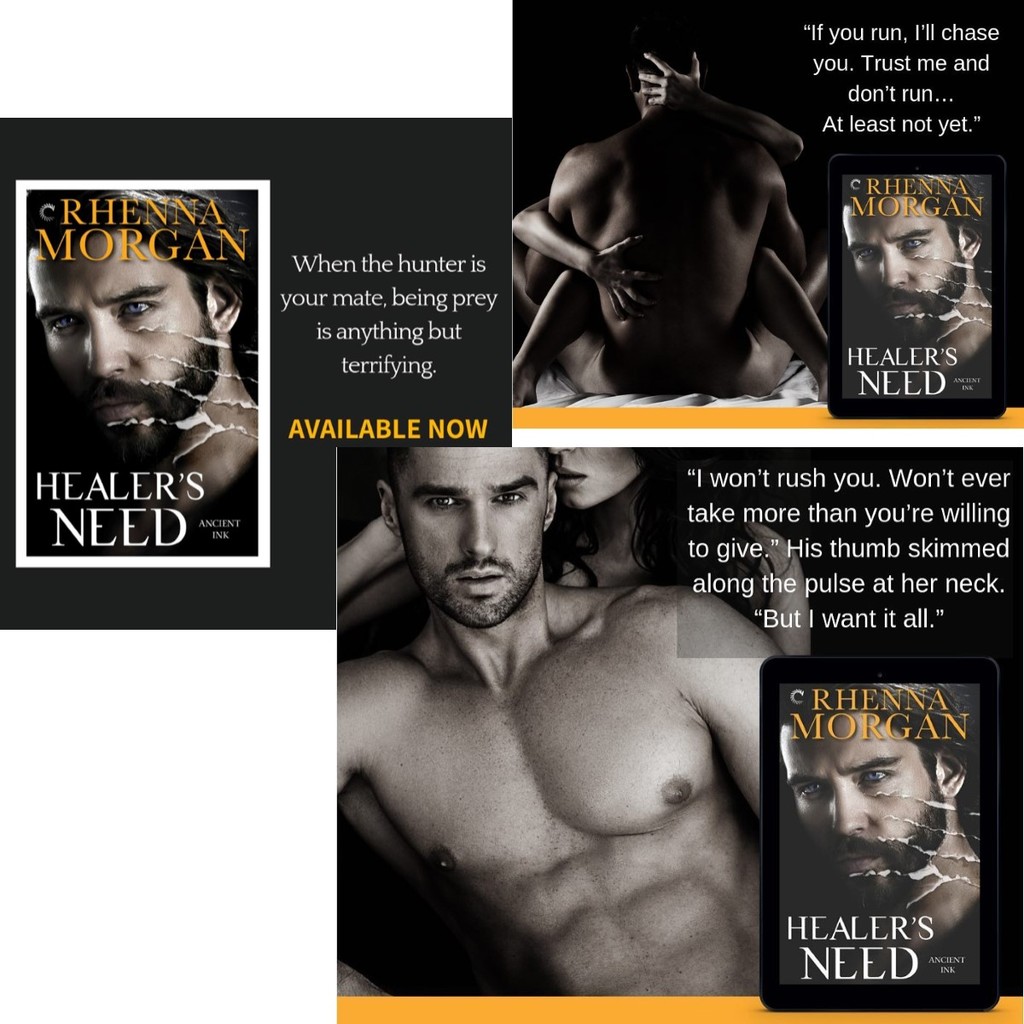 His hackles bristled, and a low growl rolled up his throat, his beast chiming in with its own displeasure. In the two weeks since he’d met Elise, his companion had grudgingly played along with the self-imposed distance Tate had kept between them. A distance his instincts insisted was crucial to learn and prepare for the hunt ahead. Hell, the way Elise’s heart had hammered in those first few seconds, distance had been downright necessary. The only reliable action that kept him from pinning her to the floor and taking her right then and there.

But his coyote was done with waiting. Had exhausted its patience and was ready to get on with the business of winning their mate.

It was more thought and emotion than actual words, the connection between man and animal as natural as his heart and lungs working in synchronization.

Tate spun toward the sound, ears tweaking in the direction of soft, but steady footfalls against soil softened by April’s steady rains. Logic told him it was Jade finally showing up to do what he’d asked of her, but with Draven still on the loose and hunting clan primos, the warrior in him wasn’t willing to run on logic alone.

A second later, Jade strode into view, her long dark hair loose and swinging with each confident step, and the silver charms she’d woven into braids on one side of her head sparking in the waning sunlight. While she wasn’t his sister in the truest sense, they may as well have shared blood. He sure as hell wanted to strangle her right about now the way a blood-bound brother would.

He waited until she was within ten feet to welcome his shift, the snap and burn beneath his skin as he relinquished his animal form to the Otherworld nothing compared to the impatience twisting his insides. “You’re late.”

Apparently, he and his coyote weren’t the only ones in a nasty mood, because Jade snarled back at him as only a woman could, a little of her lynx mingling with the sound. “Elise is my friend, not an assignment. If you don’t want to work with my timetable, then get off your ass and engage with your mate the way you’re supposed to.”
“She’s new.”

“So? Katy was new, too, and Priest barely let her out of his sight.”
Oh, Elise hadn’t been far from him. Maybe not always visible, but aside from time spent at work with a tattoo iron in his hand or running down leads on Draven and their missing seer primo when Priest demanded it, Tate had stayed close to her. It’d meant a lot of time in coyote form to maintain control and sleeping hidden outside her home, but he’d kept as tight of a connection as he dared. “She’s different.” Carina Press is offering ten (10) lucky winners a paperback copy of one of Rhenna Morgan’s backlist Carina Press titles (winner’s choice)! To enter, simply fill out the Rafflecopter below: A native Oklahoman, Rhenna Morgan is a certified romance junkie. Whether it’s contemporary, paranormal, or fantasy you’re after, Rhenna’s stories pack romantic escape full of new, exciting worlds, and strong, intuitive men who fight to keep the women they want. For advance release news and exclusive content, sign up for her newsletter at http://RhennaMorgan.com. You'll also find all of her social links there, along with her smoking hot inspiration boards.