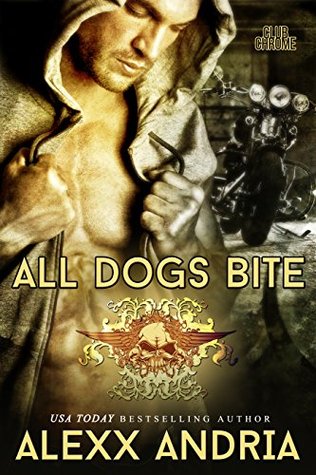 TITLE: ALL DOGS BITE by ALEXX ANDRIA
SERIES:CLUB CHROME
RELEASE DATE: SEPTEMBER 15, 2014
PUBLISHER : ALEXX ANDRIA
PAGES: 155
SOURCE: AUTHOR
BUY LINK: AMAZON
BLURB
USA Today bestselling author Alexx Andria crafts another MC romance that will leave her readers breathless.
When Delainey Jones pictured the love of her life, she never imagined a hard-as-nails MC leader who is as bad as they come but when a man climbs through her window, bleeding from a gunshot wound and needing a place to hide, all she can see is one hot, sexy man in need of her help and she doesn't hesitate.
But Delainey's compassionate nature might be her undoing because this man isn't the kind a sweet, trusting woman like Delainey should let in her bed...or her heart. In fact, he's the worst kind of man for a woman like her. Too bad she can't seem to get enough.
Bronx Harris doesn't know what to think of the curvy strawberry blonde but he does know that she's pretty sexy and he's down with recuperating with her as his personal nurse while he lays low. But all too soon, Bronx finds himself feeling more than he should - more than what's safe - for the curvy, innocent woman and he knows he ought to walk away. But Delainey is like a drug in his system and before long, walking away feels like the last thing he wants to do...even though he knows he'll never be the man she needs him to be.
Can their love survive the collateral damage of two worlds colliding? Find out in the thrilling sequel to Alexx Andria's Kings of Asphalt, Club Chrome series.
REVIEW
My decision to read this book was based
The cover
The synopsis

I could not wait to sink my teeth into this one.  However, after the first ten percent (10%) I began to doubt my decision.  I found this story somewhat unrealistic based on the following:

a.       Which self-respecting and sane woman would accept a strange man with a gunshot wound  into her home, proceeded to tend his wounds and never thought to call the police?  In addition, you find out that this man is the leader of a notorious motorcycle and you allow him to hide out at your home.


b.       I don’t possess a medical degree, but I know that it’s not possible to dress a gunshot with just alcohol and band aids, especially when the person is bleeding profusely.

c.    I found it strange that Delainey could fall hopelessly in love with Bronx and she knew nothing about him.

d.      In this day and age, with all the different types of STDs out there, why would one choose to have unprotected sex with someone you don’t know?

e.      I thought he was a jerk. Here is someone willing to help you and all you can think about is finding ways to manipulate the person.  He believed Delainey to be an easy mark because of her size. How cruel and sexist is that?

It was these things that irritated me and had me questioning my judgement to continue reading this title. However, as I am not someone who throws in the towel so easily I stuck it out.  Well, you are probably wondering if it was worthwhile to stick it out. I must admit there were some redeeming qualities.

Bronx’s  back story made for some interesting reading.  It provided me with a clearer picture of why he was the way he is not that it’s an excuse to treat Delainey so poorly.  This revelation led to some really bad people being put behind bars where they deserved to be. The investigation into who wanted him dead also helped in the redemption of this story for me.  It was interesting to discover who was behind his shooting.

I thought Delainey was a good influence for Bronx as she made him want to change the way he lived his life.  Bronx, on the other hand is scared of how she made him feel and he was not sure if he would be able to handle being in love with her.  He is not willing to face up to his feelings which helped create heartache and pain for both parties.

I loved the way the story was wrapped up as it does not leave readers hanging.
Overall, this was an ok read.