Review: A Secret To Die For (Secret McQueen #8) Sierra Dean

No one is safe.

Secret McQueen thought she’d seen it all, but that was before she, Desmond and Holden came home to find New York City burning and the streets overwhelmed with the walking dead. Now, in a race against time, she must find out who is responsible for unleashing hell on Earth.

For that, she’s going to need a whole new team of vampire wardens to help round up the perpetrators, who turn out to be a gang that makes Sons of Anarchy look like toddlers on tricycles.

Her quest across the city brings old friends and enemies out of the woodwork and reminds Secret once and for all why mercy and forgiveness are not always prudent. Lives will be lost, sacrifices will be made, and when the dust settles, nothing will ever be the same again.

With no time to mourn her losses, the only question remaining is if Secret can survive long enough to stop the apocalypse…or if this is the one challenge that will finally drown her in rivers of undead blood.

Warning: The final book in the Secret McQueen series has it all: hot kisses, unexpected guests, and enough tear-jerking moments to require a whole box of tissues. You’ve been warned.

Someone’s unleashed hell on earth and Secret’s quest to find them brings old friends and enemies out of the woodwork and when the dust settles nothing will ever be the same in this thrilling conclusion to this urban fantasy series.

Secret thought she had seen it all but finding New York’s streets overwhelmed with the walking dead is something she never thought she would see as zombies aren’t real and the reader can’t help but get caught up in all the thrilling excitement as Secrets struggles to survive long enough to stop the apocalypse. The characters are strong, compelling and most are kick ass so they demand the reader’s attention be front and center while the fast paced and smooth flowing plot keeps the readers on the edge of their seat with lots of suspense, action and romance.

Excitement builds as the danger escalates and the wolves, vampires and humans have to work together to end the threat with some serious tension building as well between Secret, Desmond, Holden and some from Lucas too, which spices things up quite a bit and then there is the fact that the story has enough emotional turmoil to squeeze the heart in two and tears from the reader’s eyes. The well written scenes and details paint vivid images that bring the story to life while the well-orchestrated events ensure that there is never a dull moment and that the reader doesn’t want to miss a second of this apocalypse.

Lots of captivating characters and a fascinating world with lots of intriguing elements, some unexpected twists and non-stop action kept me from this putting this book down once I began reading it. I must say I was quite surprised at how much I enjoyed this story as I haven’t read any of the previous books in the series but Secret has certainly caught my attention now, so I will be taking care of that and looking forward to reading Genie McQueen’s adventures as well and just to let you know that while the book references past events I had no trouble picking up the story. 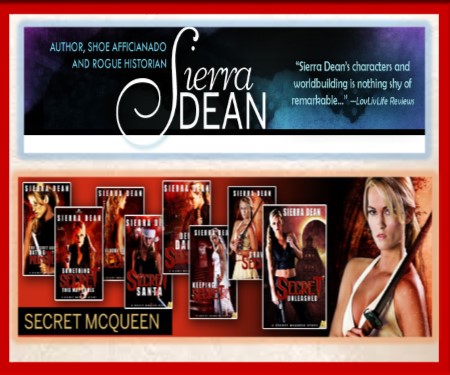 Secret McQueen is a half-vampire/half-werewolf bounty hunter living in New York City, trying to fit in when all she does is stand out.

There’s a new McQueen in town:

Genie McQueen is a werewolf/witch hybrid, struggling to make sense of her place in a world that has just discovered supernatural beings exist.

Sierra Dean is a reformed historian. She was born and raised in the Canadian prairies and is allowed annual exit visas in order to continue her quest of steadily conquering the world one city at a time. Making the best of the cold Canadian winters, Sierra indulges in her less global interests: drinking too much tea and writing urban fantasy.

Ever since she was a young girl she has loved the idea of the supernatural coexisting with the mundane. As an adult, however, the idea evolved from the notion of fairies in flower beds, to imagining that the rugged-looking guy at the garage might secretly be a werewolf. She has used her overactive imagination to create her own version of the world, where vampire, werewolves, fairies, gods and monsters all walk among us, and she’ll continue to travel as much as possible until she finds it for real.

She’s also a book lover (of course!), obsessive collector of OPI nailpolish and the owner of way too many pairs of shoes.

Connect with Sierra at: