Release Day Review: Under the Blood Moon (Under the Moon #1) Tracie Provost 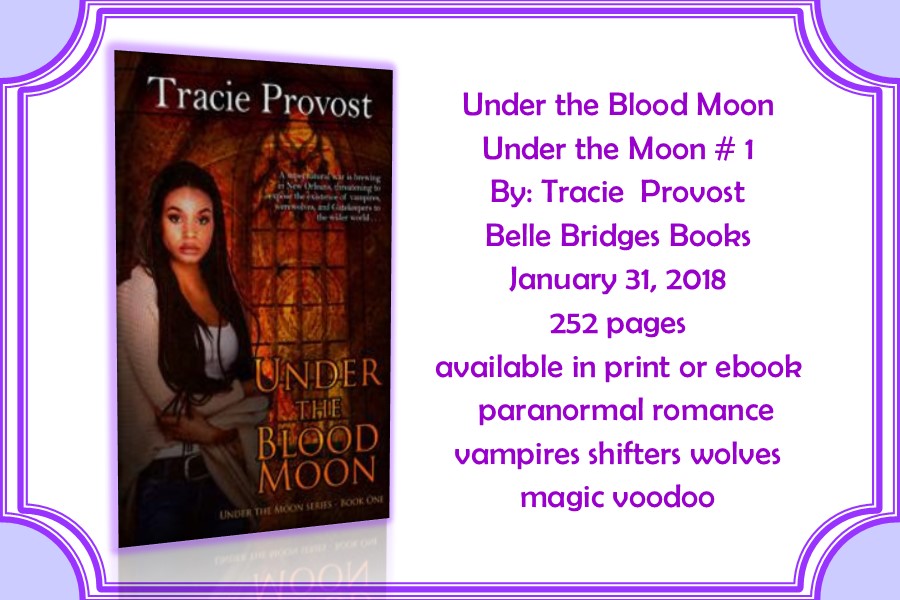 A supernatural war is brewing in New Orleans, threatening to expose the existence of vampires, werewolves, and Gatekeepers to the wider world . . .

Ritually staked and hidden for two hundred years, Juliette de Grammont, voodoo priestess and vampire, is found and revived. Just days after she is freed, still coping with a world she could never have imagined, she loses her sire and vampire coven in a fire. Confused and alone, Juliette seeks the help of the city's powerful Grand Master, but dark elements within the city are conspiring to topple that regime. Soon Juliette's struggle for survival places her in the middle of a supernatural war for control of the city.

Josh Bouchard, former Texas Ranger now vampire and coven lieutenant, is drawn into the conflict and appoints himself Juliette's protector over her objections. They must enlist the help of both the city's werewolf pack and the Gatekeepers - a shadowy group dedicated to keeping the paranormal world secret from humans - to forge a coalition to save New Orleans from the powers that seek to destroy it.

After traveling extensively with wanderlust struck parents, Tracie Provost settled down to small town life in rural Georgia. There she teaches history at a small university and writes to keep her cats in the luxury to which they have become accustomed.

The first book in the new ‘Under the Moon’ series by Tracie Provost starts off a bit on the slow side or so I thought, really it starts off with a series of small events that keep readers’ curiosity spiked and it draws them deeper into the magical New Orleans setting. The author did a great job of setting the scene and the background so it really sets the mood for the book, so the reader becomes engrossed in the book and even though it seems slow, the reader is completely hooked, it does pick up speed and then things get even better.

The strong, compelling characters grab the reader’s attention and refuse to let go as Juliette and Josh get to know one other through all the trials and tribulations of the story. The romance is on the sweet side and the book focuses more on the thrilling events of the plot than the romance throughout most of the book.

I said above that the story is a bit slow but really the plot is a steady to fast pace that keeps the reader glued to the pages as the events unfold building suspense and anticipation throughout with some unexpected twists that surprises readers as well as the characters.

Overall, at the beginning, I wasn’t sure that I was going to like the story, but it didn’t take long before I was completely caught up in the story, the author created a great paranormal story with a few unique qualities that makes her story stand out and I am now looking forward to reading the next book and finding out just how the series progresses.

Under the Blood Moon is the 1st book in the Under the Moon series.

Under the Blood Moon is available in print or ebook at:

Tracie Provost can be found at: