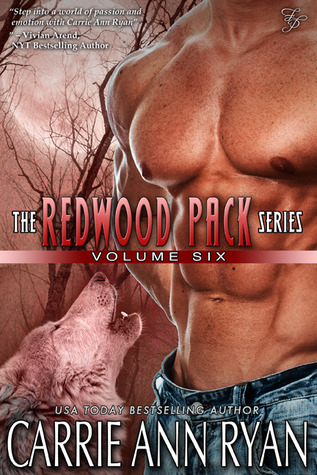 Redwood Pack Vol 6 contains the seventh book in the Redwood Pack series and a special novella in print and digital form.

With her blue-black hair and striking green eyes, Cailin Jamenson is the epitome of beauty and the exemplar of strength. She has fought the enforced boundaries of being the lone Jamenson daughter and Redwood Pack princess, but it is the potential future with the dark wolf in her path that threatens everything she thought she desired.
Logan Anderson’s own darkness provided the reasoning for his abandonment of his former Pack, the Talons. Now, newly accepted into the Redwood Pack, this jade-eyed wolf and all she represents could be his own undoing.
In this final installment of the Redwood Pack, unimaginable tragedy strikes, and the two wolves who have fought the longest for their independence now face the uncertainty of fate and the epic battle that could end the war… and their lives.

Maddox Jamenson almost lost his mate before he knew she existed, but his life is now exactly how he’d dreamed it. The war with the Centrals is over, and his family is healing one day at a time. Ellie is reveling in the simple perfection that is her life and family now, but that doesn’t mean she can shed the self-doubts and concerns that come with being a new mother, mate, and Redwood.
When a disturbance in their quiet life threatens to ruin everything they’ve fought for, Maddox and Ellie will have to learn not only to rely on each other more than ever, but find within themselves the power to forgive.
Author’s Note: This is a novella set after book 7 to give you a taste of Maddox and Ellie. It is best that you have already immersed yourselves in the Redwood Pack world, however even new readers will enjoy a glimpse of one of the Redwood’s favorite couples.

This Redwood Pack Volume contains two mesmerizing reads that capture the heart. Unimaginable tragedy strikes and the two wolves who have fought the longest now face an uncertain fate in Fighting Fate.  In Loving the Omega, it takes a disturbance in their quiet life for Maddox and Ellie to learn forgiveness.

The author brings both stories to life with well written scenes and details that paint vivid images and capture the imagination and the strong compelling Redwood Pack members continue to draw the reader deeper into their world with lots of suspense, drama and love.

Both stories have passion that burns up the pages and hot and steamy sex, but they also capture the heart and the reader can’t help but get caught up in their stories.

Fighting Fate: The battle between the Redwood Pack and the Centrals have waged for a few years and the readers have followed faithfully through all the tragedy and triumphs, tears and smiles, but the ultimate tragedy brings heartache and tears to the reader’s eyes.  But don’t despair because this story is also about hope and HEAs and the author doesn’t disappoint.

Loving the Omega is but a glimpse into the lives of Ellie and Maddox but packs quite an emotional punch as they try to deal with their emotional crisis and reaffirm their love for each other.

I was completely caught up in both stories from beginning to end, the author always makes me feel as if I really know these characters and whether it’s a full story or a glimpse I always find them enjoyable and entertaining.  As always the stories should be read in order to get the full impact of the ongoing war with the Central Pack, although normally I would tell you that could if you really want to enjoy them out of order I really suggest that Fighting Fate before Loving the Omega because of major spoilers.

You can see my reviews of these stories individually as well at: 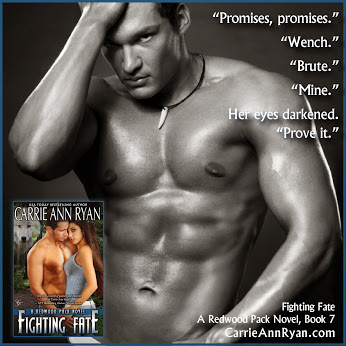 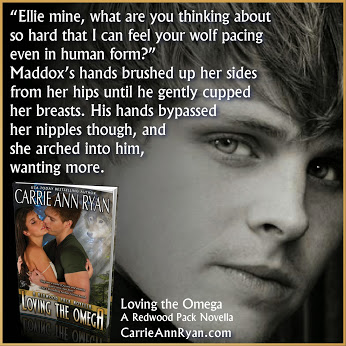 The Redwood Pack is a centuries old Pack of werewolves led by the Jamenson family. Throughout the ages the strongest of them – the eldest son – has led with power and dignity. They immerse themselves in their land yet integrate within society. Their secrets are held true through strength and trust.

Edward and Patrica Jamenson have six sons and one daughter. Each must find their mates and succumb to their fate. An evil shadow is coming and the Jamensons are on the front line. Will you be there to follow their journey?

There will be seven books total with at least six extra novellas.

A Taste for a Mate

The Hunted Heart in the Dark Fates Anthology

USA Today Bestselling Author Carrie Ann Ryan never thought she’d be a writer. Not really. No, she loved math and science and even went on to graduate school in chemistry. Yes, she read as a kid and devoured teen fiction and Harry Potter, but it wasn’t until someone handed her a romance book in her late teens that she realized that there was something out there just for her. When another author suggested she use the voices in her head for good and not evil, The Redwood Pack and all her other stories were born.

Carrie Ann is a bestselling author of over twenty novels and novellas and has so much more on her mind (and on her spreadsheets *grins*) that she isn’t planning on giving up her dream anytime soon.