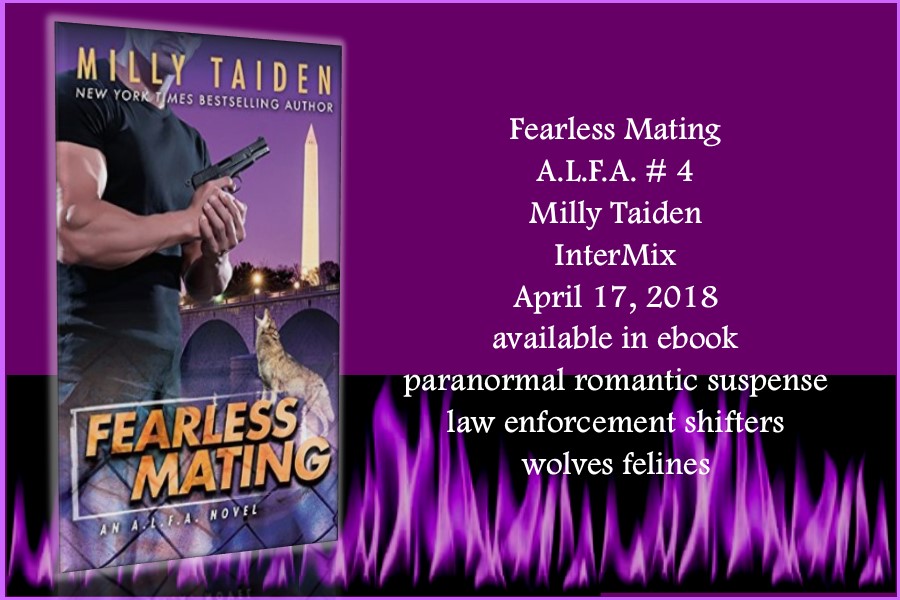 Their jobs have set them at odds, but the attraction brewing between them is too strong to resist in this all-new paranormal romance from the author of Dangerous Mating.

Sergeant Major Candace Obermier has arrived at Alpha League Federal Agency headquarters with one task in mind--shutting it down. While A.L.F.A.'s pledge to protect humans from paranormal threats is noble, they've caused nothing but mayhem as far as Candy can tell. And their director? He's the worst of the lot.

Director Josh Tumbel has finally found his mate. And she's doing everything she can to shut down operations, while he struggles to control his mating instincts. But when A.L.F.A. headquarters is taken in a hostage situation, Josh has a chance to demonstrate the critical nature of the agency's existence, and prove his worth to Candy as a protector and lover.

Fearless Mating is another exciting A.L.F.A. read that gets the adrenaline pumping and the heart pounding.  Josh and Candace have strong chemistry that grabs reader’s attention and keeps them entertained throughout the story. These strong, compelling characters’ relationship starts off on the negative side of any kind of get to know each other measurement which really makes things interesting since Josh immediately recognizes Candace as his mate, and from this rocky relationship just keeps getting more interesting and the steamier.

This fast paced plot if full of adrenaline pumping action and thrills that keep readers on the edge of their seats and wondering what will happen next as the bad guys keep the characters as well as the reader guessing just what they are really up to and there are some exhilarating danger filled moments that add to the thrills and excitement.

Once again, Milly Taiden’s shifter law enforcement world kept me glued to the pages and once again the A.L.F.A. team has another sensational event where they need to put their skills to the test but this one is even spicier because Josh has met his match and she just may be tougher than he is. I can’t wait to see what Milly Taiden has in store for us next.

Fearless Mating is the 4th book in the A.L.F.A. series.

Ebook will is available at:

Milly Taiden can be found at: